Sid Ramin, an orchestrator, arranger and composer who won both an Oscar and a Grammy for his work on the film “West Side Story” and whose career outlets ranged from revered Broadway musicals to perfume commercials, died on Monday at his home in Manhattan. He was 100.

The death was confirmed by his son, Ron.

Mr. Ramin (pronounced RAY-min) was one of two orchestrators — three, if you count the contributions of the composer, Leonard Bernstein, a lifelong friend — on the original Broadway production of “West Side Story,” which opened in 1957. According to “The Sound of Broadway Music” (2009), by Steven Suskin, Mr. Ramin worked on the haunting ballad “Somewhere,” the evocative “Something’s Coming,” the sweetly comic “I Feel Pretty,” the bravado-of-youth anthem “Here Come the Jets” and the irreverent “Gee, Officer Krupke.”

Sid Ramin could easily have put the letters EGOT after his name, as one of the small group of artists who have won Emmy, Grammy, Oscar and Tony awards. But the Tonys did not formally honor orchestration until 1997, four years after his last Broadway show (“The Red Shoes”). His 1983 Emmy was not usually the first award he talked about; it was for his work on the daytime drama “All My Children.” 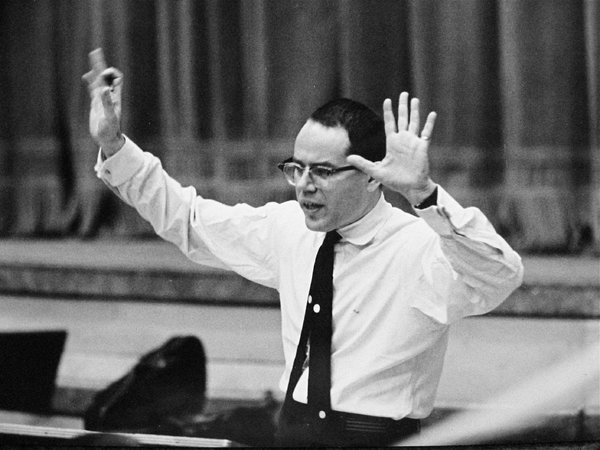 If EGOC had existed instead, Mr. Ramin would have easily qualified: He won 12 Clio Awards, the advertising industry’s highest honor.

“Music to Watch Girls By,” a peppy, Latin-accented instrumental he wrote for a Diet Pepsi commercial in the mid-1960s, became something of a phenomenon. It was recorded by a diverse group of musicians, including Al Hirt, Chet Atkins, the Bob Crewe Generation and (with lyrics added) Andy Williams. Both the Crewe and Williams versions were Top 40 hits.

The consumer products for which he wrote or arranged lively jingle music included a Revlon fragrance (“Kind of free/Kind of wow/Charlie!”), a laundry liquid (“You’ll look better/In the clothes you trust/To Woolite”) and a toothpaste (“How’s your love life?/How’s your love life?/Use Ultra Brite” — sung to the tune of “The Hallelujah Chorus”).

His overture for “Gypsy” was particularly lauded. The British actor John Gielgud once said it was the only recording he would need with him if he were stranded on a desert island. Mr. Ramin made the decision not to include song excerpts in chronological order, as most Broadway overtures do, but to begin with the opening notes (“I had a dream”) from “Everything’s Coming Up Roses,” originally sung by Ethel Merman in the role of Gypsy Rose Lee’s mother.

Mr. Ramin’s work seemed omnipresent in 1960s popular culture. He wrote the music for the “Patty Duke Show” theme (“They’re cousins/Identical cousins …” and he was also the show’s conductor and music supervisor) and for another popular series, “Candid Camera.”

Although he was the arranger and conductor for “Stiletto,” a 1969 crime drama, and for a 1973 television movie remake of “Miracle on 34th Street,” the movie business was never a major part of Mr. Ramin’s career.

In a 2011 interview sponsored by the New York Philharmonic, he recalled going to the West Coast to work on the film of “West Side Story” (1961) and deciding that he and his collaborator, Irwin Kostal, should do as the Romans do.

“Let’s set up a bridge table at the pool and work poolside,” Mr. Ramin said he suggested. When the two men, who had also worked together on the Broadway production, decided to take a break and a swim, all their pages flew into the pool beside them — and they had been working in ink. The moral: “We decided we should not go Hollywood.”

Sidney Nathan Ramin was born in Boston on Jan. 22, 1919, the older of two sons of Ezra Ramin, a Russian-born visual merchandiser (the job was called window dresser at the time) for the department store Jordan Marsh, and Beatrice (Salamoff) Ramin. He grew up in the Roxbury neighborhood and at age 12 made a best friend for life: a neighbor named Leonard Bernstein, who was 13.

“We created little songs together,” Mr. Ramin recalled decades later in a Film Music Foundation video interview, and they exchanged constructive criticism. Bernstein assumed the role of teacher early on.

When Bernstein enrolled at Harvard, Mr. Ramin arranged for them to continue studying together. “I’ll pay you a dollar a lesson and a candy bar,” he told Bernstein. Reports differ as to whether the bars in question were Three Musketeers or Milky Way.

A memorial to those who lost their lives in 2019

Mr. Ramin always contended that aside from his early colloquy with Bernstein, he had no training in orchestration — and that he never learned to play a musical instrument. Before joining the Army, though, he did attend the New England Conservatory of Music, as well as Boston University.

He spent five years in the Army, much of it in France, where he created original productions for the Army band. In 1946 he moved to New York City, where he attended Columbia University with the help of the G.I. Bill.

By the 1950s he was the musical arranger for “The Milton Berle Show” (originally “Texaco Star Theater”), NBC’s hit hourlong variety-comedy series. He was also making albums for RCA Victor as the leader of Sid Ramin and His Orchestra. Then Bernstein called about the “West Side Story” job.

Mr. Ramin married Gloria Breit in 1949. She and his son survive him, as do two grandsons. His brother died in 2012.

Leonard Bernstein died in 1990, but Mr. Ramin continued to be interviewed about their work together. “He loved to talk, and I loved to listen to him. I guess it’s about as close to idolizing someone as you can get,” Mr. Ramin told The New York Times in 2003. “My analyst used to say it was a little much.”