Walters was a broadcasting trailblazer who helped develop many modern TV templates. Here are some of the most memorable moments from her influential career. 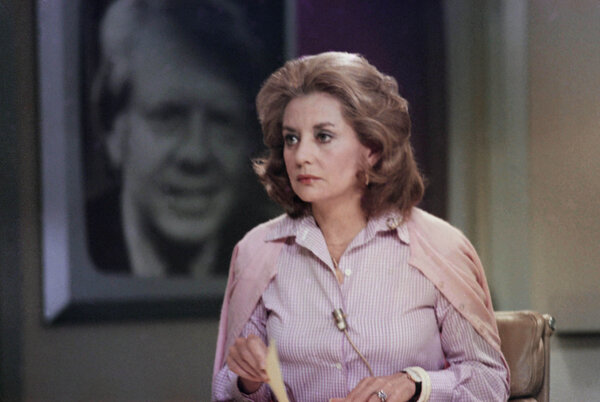 Over more than six decades in television, Barbara Walters, who died Friday at 93, became best known for her one-on-one interviews. An integral part of whichever news show she was anchoring at a given time — or of her own “Barbara Walters Specials” — her interview style became one of the best known in broadcast journalism. Walters, sitting at camera right, quite close to her subject, extracted the kinds of juicy revelations that became her trademark, be they from a president or dictator, a movie star or murderer.

But Walters was more than just a celebrated interviewer. She spent most of her career as a broadcasting trailblazer: She was the first woman to anchor a network nightly news show and also helped popularize prime-time newsmagazines and daytime talk shows. Her final act on TV, as a creator and host of “The View,” established yet another TV template.

Here’s a look at some of the most memorable moments from her influential career.

Walters made her on-camera debut in 1955, standing in for a no-show swimsuit model on a long-gone CBS morning show. By 1961, she had landed a staff writing gig at the “Today” show, where she had opportunities to show off both her wit and her ability to handle hard news (following the Kennedy assassination).

Before Walters’s arrival, the morning show had a history of calling female staffers “Today Girls” and using them as purveyors of fluff. Walters broke away from that tradition by scoring exclusive interviews with national and international political figures (Richard Nixon, Henry Kissinger, Prince Philip, Phyllis Schlafly) and showbiz celebrities (Judy Garland, Barbra Streisand, Bette Midler). The blending of these two worlds would become Walters’s signature style. (She memorably asked Kissinger about reports of his being a swinging bachelor.)

Despite regularly appearing on the “Today” show for more than a decade, Walters wasn’t made an official co-host until 1974, when she became the first woman to earn that title. She left the program in 1976 without much on-air fanfare, possibly because she had been lured away by a very large offer from the rival network ABC, a move that proved difficult for her.

Want to know where Gilda Radner got her inspiration for her Barbara Wawa caricature on “Saturday Night Live”? From watching Walters host an issues-oriented chat show called “Not For Women Only.”

In 1971, NBC asked Walters to take over as the host of “For Women Only,” a stodgy panel show that had been hosted by the former art critic Aline Saarinen. Walters agreed but wanted to revamp it by changing the name, goosing the program’s academic tone and embracing discussions of more personal interest to viewers. Soon the show covered provocative topics like the Equal Rights Amendment, sexual dysfunction and marijuana, and guests included inventors, soap opera writers and politicians’ wives, among them Barbara Bush and Mamie Eisenhower. Walters hosted the show for five years (eventually alternating weeks with Hugh Downs), turning it into a syndicated success seen in 80 cities that became a prototype for future shows by Phil Donahue, Oprah Winfrey and others as well as for Walters’s own daytime hit, “The View,” years later.

Walters’s move to ABC as the first female co-anchor of a nightly network newscast wasn’t universally applauded. Was she worth her new million-dollar contract? Her “ABC Evening News” co-host, Harry Reasoner, didn’t think so and rarely hid his contempt on-camera.