The artist Brendan Fernandes was dancing by himself for a moment at the spring gala for the Guggenheim’s Young Collectors Council, lost in the throbbing music as if he were in a club, not at the base of Frank Lloyd Wright’s rotunda, surrounded by hundreds of cocktail-wielding patrons.

Most eyes were on the professional dancers whom Mr. Fernandes had wrangled for the occasion, in a piece he had choreographed that mixed ballet and shibari, the Japanese art of rope bondage.

Clad in minimal black, the dancers were all wearing segments of thick rope on their upper bodies, and sometimes the shirtless men were chained to a large metal armature that served as a stage as they stretched and writhed. (The women were exempt from that.)

It was an example of what Mr. Fernandes, 39, calls “ballet kink,” part of his genre-bending and boundary-pushing method that melds dance with visual art and has earned him a place in multiple exhibitions this year. The Biennial at the Whitney Museum of American Art, for instance, currently features his work “The Master and Form” on the fifth floor, through Sept 22. (It will be performed at set hours on weekends in June and September; performances in July and August will be limited to Fridays.) Last week, “Brendan Fernandes, a Call and Response” opened at the Museum of Contemporary Art Chicago.

The interdisciplinary practice that he has concocted over the last 15 years fits a cultural moment in which museums are featuring more performance, and institutions like the Shed are designed for it. But Mr. Fernandes said he was skeptical of “artists who say, ‘I use dance.’”

“I come to it from lived experience,” added Mr. Fernandes, 39, who trained for years as a ballet dancer.

As dance performances go, “The Master and Form” at the Whitney is slow and teasing.

No one makes a jeté across the floor in the piece.

After a long bout of stretching that is part of the work and then reappears throughout, dancers clad in black make their way around a minimal arrangement of scaffolding — designed by Mr. Fernandes with the architecture firm Norman Kelley — emphasizing and drawing out every move.

At one preview in May, the audience looked a bit puzzled at first — was this it? The big finale consists of the troupe standing in front of the museum’s large windows and grabbing onto long, thick ropes suspended from the ceiling before leaning and pulling on them.

Mr. Fernandes doesn’t perform in his creations, but he’s performative in the way of the modern art impresario. A few days after the Guggenheim gala, he posted a picture on Instagram of himself and the male dancers from the performance: They were on all fours and he was holding their ropes as if they were dogs on leashes. “#zaddy handling the #pups!” read the caption. 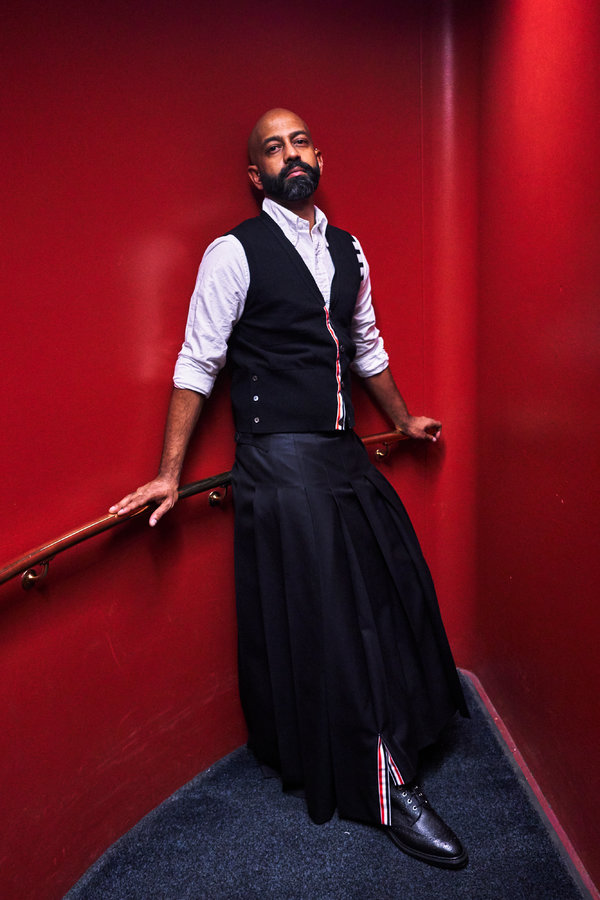 Mr. Fernandes, who lives in Chicago, was born in Nairobi, Kenya, to parents of Indian descent, and grew up mostly in Toronto. His diverse background is evidenced in his art, which pulls from classical dance traditions, queer culture, kink and the conceptual-art probings of the more typical museum artist.

“Brendan is a hybrid, and he’s refreshing in the art world,” said Pamela Joyner, a San Francisco collector and self-proclaimed balletomane who owns a sculpture by Mr. Fernandes called “In Passé, In Fourth.” “Most people who work with dance in the museum context don’t get it quite right,” she added. “He knows how dancers’ bodies work.”

His work has a central theme, found in a question Mr. Fernandes posed casually over coffee: “How do we find freedom in restraints?”

It is, of course, a central question in ballet.

He didn’t mean only restraints of the leather kind, but also much larger cultural burdens, like colonialism, which he addressed in “Authority Inside” (2016), a ballet staged in the archival vault of the African collection at the Agnes Etherington Art Center in Kingston, Ontario.

Mr. Fernandes fits well into the context of the 2019 Biennial, which “brings forward the performative element,” said Rujeko Hockley, who organized the exhibition with Jane Panetta.

She noted that both she and Ms. Panetta studied ballet, helping to explain the prominence of dance in the exhibition, which includes Madeline Hollander’s site-specific “Ouroboros: Gs,” exploring the ways in which the Whitney has had to adapt in the face of climate change. It will be performed on Sept. 19 and 22 to help close out the Biennial.

Ms. Hockley said it was partly the way Mr. Fernandes “plays with the audience’s expectations” in his Biennial work, not giving them the soaring moves they might think are coming, that made it interesting.

“He brings forward the things that are often hidden — the stretching, the preparation,” she said. “He finds beauty in that.”

“The Master and Form” was first staged at the architecture-focused Graham Foundation for Advanced Studies in the Fine Arts in Chicago in 2018, and Mr. Fernandes sees it as an evolving work with different chapters. Coming iterations will be seen at the Noguchi Museum in New York in September, and next year at the Asian Art Museum in San Francisco.

The culture of ballet, with its emphasis on control and discipline, is the foundation of his Biennial presentation. “It looks at the masochism, the sadism within it,” said Mr. Fernandes, a graduate of the Whitney’s Independent Study Program. “Ballet is definitely its own fetishized world. We don’t want to admit to those things because we’re ballet. We look effortless, we look pretty.”

As viewers have discovered, the scaffolding doesn’t put dancers under duress. “It’s not a prison,” Mr. Fernandes said. “It’s a place to stretch and release,” he added, “almost like a safe space.”

Curators and dancers gravitate to the way he seeks a tonal balance even as he sometimes emphasizes ballet’s “Black Swan” side.

“It’s both a critique and a celebration of the form,” said Amanda Jane Graham, who worked as a dramaturge for Mr. Fernandes on “Clean Labor” (2017), a site-specific piece about the overlooked efforts of hotel workers that was staged at the Wythe Hotel in Brooklyn.

Denise Markonish, a curator at MASS MoCA, who included Mr. Fernandes in the 2012-13 show “Oh, Canada,” said that “Clean Labor” showed off his particular gifts.

“The piece was incredible in the way he took the repetitive movements of hotel workers and turned them into choreography,” Ms. Markonish said.

The intense rigors of ballet were impressed at an early age on Mr. Fernandes, who started taking ballet when he was 14. “When we were kids, we had to go into passé and develop our ‘leg out,’” he said, referring to a classical ballet movement where a dancer bends one leg, like a triangle, with the foot near the knee of the other leg.

“My Russian teacher would take a lighter, and she would put it under us,” he said. “So we had to hold up our leg for as long as we could. If we didn’t, we got burned.”

In the Toronto suburbs of his youth, ballet was not an expected pursuit for a boy. “My parents were like, ‘You need to be a doctor or a priest,’” Mr. Fernandes said. They eventually accepted his choice of career partly when Mr. Fernandes was eventually hired to teach dance at Northwestern University.

He went to York University in Toronto, and then received an M.F.A. from the University of Western Ontario. “In college, I was a double major, dance and visual arts,” Mr. Fernandes said. “I remember being at a crossroads: How do I do both?”

The answer came partly out of necessity, when he tore his hamstring during his senior year in college.

It effectively ended one kind of career, but helped lead to another.

The critics who sampled the Biennial may be mixed on Mr. Fernandes’s contribution. Jerry Saltz of New York magazine seemed to enjoy being “caught in some sort of parasexualized movement enacted on various S&M-like devices,” while Linda Yablonsky in The Art Newspaper said he had made “no forward strides” in terms of dance choreography.

It may be that in the deliberate movements of his works, Mr. Fernandes has found a version of control that works for him on two levels, both thematically and personally.

“I’m a restless creature,” he said. “Stillness is hard.” 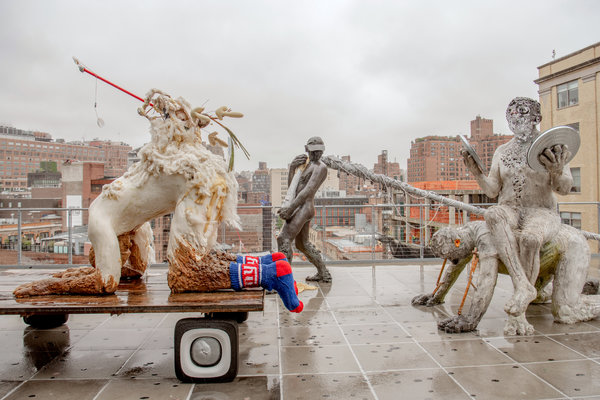 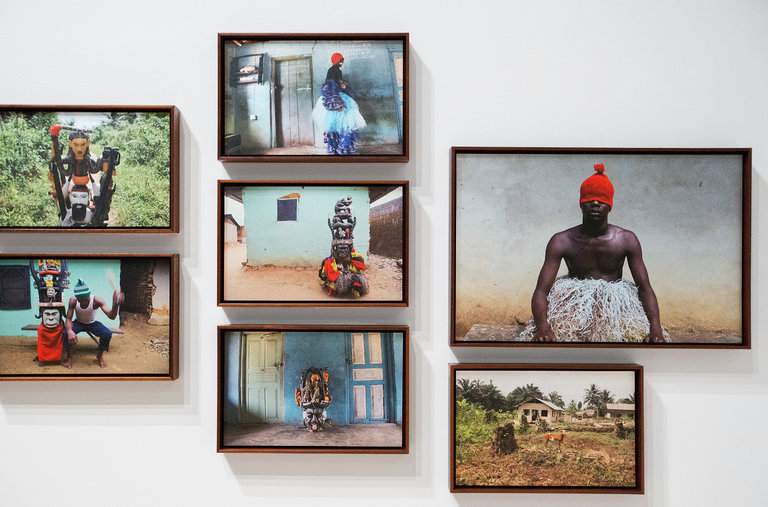