Travis Barker and Kourtney Kardashian reached a major milestone in their relationship last weekend when the couple flew together via private jet to Cabo San Lucas, Mexico. While that might not sound like anything special, we have to remember that the Blink-182 drummer hasn’t flown since his devastating plane crash in 2008. That accident killed the two pilots, Barker’s assistant and his security guard — and left him and DJ AM as the only survivors with serious injuries. 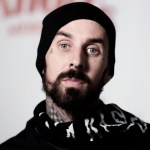 But Barker has been able to conquer his fears with Kourtney by his side and that obviously was an emotional experience for both of them. He shared a very significant moment of his girlfriend giving him the biggest kiss with her legs wrapped around him. The PDA-filled moment was staged in front of the airplane they had just safely traveled on. He captioned the photo, “With you anything is possible 🖤 @kourtneykardash.” And from the comments on the post from friends and fans, everyone is rooting this couple on.

Now a photo like this certainly isn’t going to temper any of the engagement rumors that have been going around for months, but it doesn’t matter if Kourtney has a ring on it — she is the happiest we’ve ever seen her. After years of teasing  Keeping Up with the Kardashians viewers with a possible reconciliation with the father of her three children, Scott Disick, the Poosh founder has truly moved on. In the finale reunion special, Kourtney confirmed what really shut the door for her when it came to her ex, I mean, the infidelity, I only knew about it at the end. So I think the substance abuse was the deal-breaker.”

Kourtney and Barker are probably closer than ever with this major milestone in their relationship, so we expect those marriage rumors to heat up again. And probably more PDA photos from their romantic vacation in Mexico.

Before you go, click here to see all the celebrity couples with the best stories behind how they met.