Matthew Ronay’s electric show at Casey Kaplan reveals an artist at the height of his powers. Mr. Ronay has been arranging small shapes made of carved and stained wood into aggregate sculptures for nearly two decades, and they’ve always been appealing. But the best works in the exhibition, “Betrayals of and by the Body,” go beyond appealing in their brilliant colors, myriad textures, suggestive forms and the ease and delicacy with which they fit together.

The frugal use of flocking, which adds a velvety opaque surface that contrasts with the smooth, glowing wood, unsettles perception, adding another dimension. See the stand-alone ganglia flocked dark red in “Engorged Follicle (Corazonin).”

Analogies run rampant in these pieces — to body organs, exotic plants or sea life with occasional hints of architecture, food or wet clay. And the shapes also enact tense little comedic dramas and interactions in the ways they lean, droop or are stacked.

The orange and purple shapes of “Flexed Poised Breached Swollen” are a case in point. Sex, a fight or simple cell division could be just around the corner. Yet they are present — even commanding — as abstract objects. Their highly artificial palette and dimensionality update Surrealism (Yves Tanguy’s paintings, especially) and late Guston. As with the ceramic sculptures of Ken Price, Mr. Ronay is exploiting his means to their full extent, and it is thrilling to see. ROBERTA SMITH 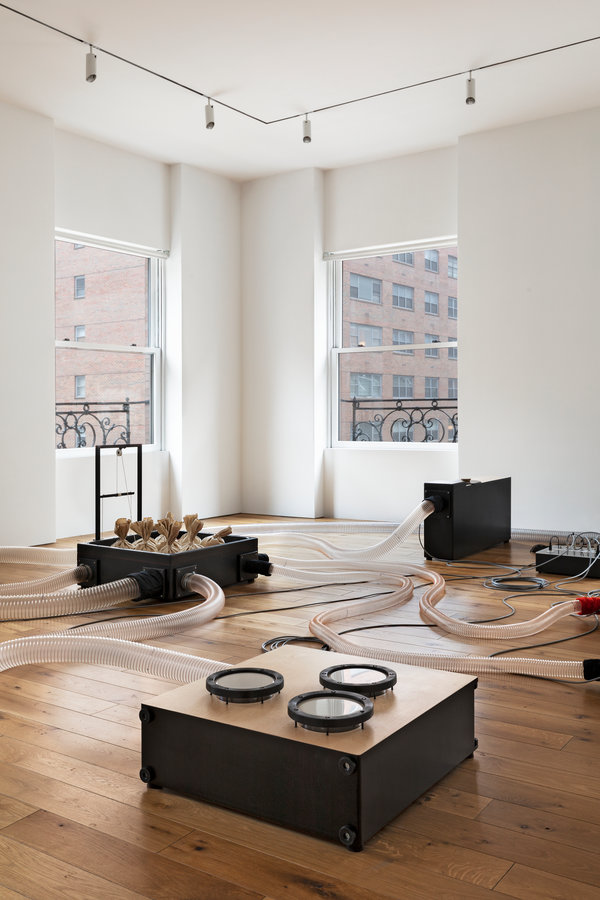 Tarek Atoui’s beautifully crafted sound-making sculptures are installed on multiple continents. He’s in the Venice Biennale, has a show in Singapore and performed recently at the Walker Art Center in Minneapolis. In New York, “Organ Within,” his exhibition at Kurimanzutto, centers on a specially built instrument based on a church pipe organ, played by musicians recruited for weekly residencies who showcase their work every Saturday at 3 p.m. (A culminating performance with Mr. Atoui and all the participants is scheduled for June 27 at the Guggenheim Museum.)

I witnessed two performances, Keith Fullerton Whitman and C. Lavender, and they were starkly different. Mr. Whitman’s approach to the sprawling organ built from wood, copper pipes, plastic tubing, sandbags (among other objects) and a computer that coordinates the elements, was more episodic and noisy; Ms. Lavender’s piece swelled into a warm, engulfing drone, in keeping with her sound-as-healing practice. (Robert Aiki Aubrey Lowe of Control, a synthesizer shop in Brooklyn, invited the performers — C. Spencer Yeh performed last week and Chuck Bettis and Victoria Shen are up next — and facilitates the whole operation.)

You can visit Kurimanzutto during the week and watch the musicians prepare. On Saturdays, however, you can see the instrument activated and feel its sounds on a deeply psychic and visceral level, which is what traditional church pipe organs were originally invented for, after all. MARTHA SCHWENDENER

In the late 1990s, a clique of young artists in Krakow shot to international attention with deadpan, schematic paintings that cast an alienated eye on the new capitalist Poland. They included Wilhelm Sasnal, Marcin Maciejowski and Rafal Bujnowski — the last of whom is now presenting a series of arresting new grisailles whose reticence gives them a paradoxical intensity.

Mr. Bujnowski paints bathers by the seashore in glassy black and white oils; their jet-black bodies stand out from beaches rendered in gradients of white to light gray. Yet the artist’s wet-on-wet brushwork is so abrupt and so total that nearly no detail remains. In five absorbing portraits, black whorls drown their subjects into featurelessness; a landscape is nothing more than striated black bands; paper towels on which the artist wipes his brushes exhibit Rorschach-like resonances of a face or a body but never properly cohere. (Even the gallery’s windows are obliterated; Mr. Bujnowski has painted over them with white stripes.) These paintings, though vacant, aren’t nihilistic — and they sure aren’t punk, despite the black-on-black color scheme. They are deliberate, haunted efforts to express the pitiful limits of contemporary human memory, always at risk of erasure in the shadow of history and the flood of the digital image stream.

Mr. Bujnowski has received shows across Europe, but this is, unbelievably, his first solo outing in New York in 15 years. Dear curators: When you are hunting for the next big thing, consider that he may already live in Warsaw! JASON FARAGO

Kiki Kogelnik, who was born in Austria and who, before her death in 1997, was active in New York, liked to put the human body in silhouette. In her painting “Friends,” a handful of bright figures, some missing a head or limb or with large circles cut right through their torsos, are thrown across a jazzy background. In “Hands,” she painted a group of dismembered arms and legs spread out like letters in a printer’s tray, and for “Divided Souls,” she cut figures out of black and white vinyl and hung them on a garment rack. The woman striking a pose in “Dynamite Darling,” the highlight of Kogelnik’s first show at Mitchell-Innes & Nash, isn’t technically a silhouette because she isn’t a monochrome, but she’s definitely flat.

And whether it happens in the pages of a fashion magazine, under the sexism of the art world, or in the pitiless gears of the atomic age, all that flattening is certainly violent. But somehow the violence seems incidental. What’s really notable about Kogelnik’s flatness is that she never lets it entirely succeed. Punk kabuki makeup gives the face in “Dynamite Darling” the suggestion of depth, as well as irony and plenty of affect, and even the physiques in “Hands” and “Divided Souls” are distinctive enough to feel individual. To me, this suggests an optimism about our power to resist the dehumanizing forces of modernity — or an invaluable insight that nothing’s ever as flat as it looks. WILL HEINRICH

In his “Great Visionary Transformation” series, Zheng Guogu layers multiple thangkas, or Buddhist devotional images, into trippy, color-filled paintings. (The imagery is constructed on computer before being transferred to canvas.) Sometimes, as in the beautiful, blue-toned “Visionary Transformation of the Purification,” the deity ends up being more or less indiscernible. But most of the time, Mr. Zheng goes for an effect more like double vision, adeptly updating the tantric imagination for the digital age. WILL HEINRICH 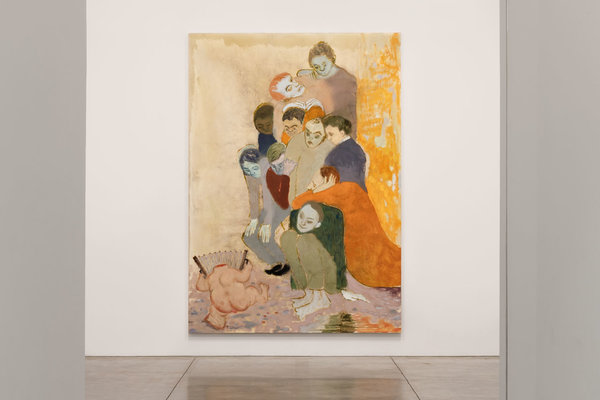