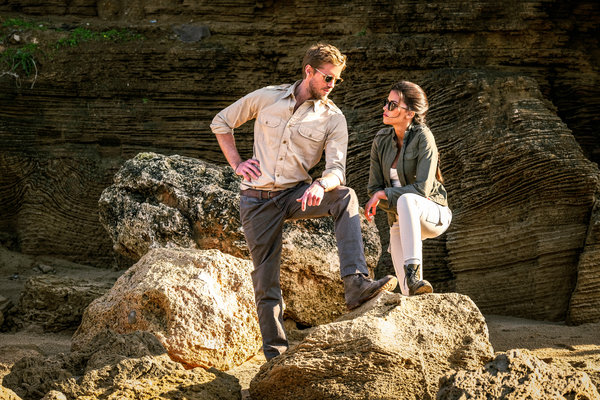 BLOOD & TREASURE 9 p.m. on CBS. Hints of James Bond and Indiana Jones are sprinkled throughout this fast-paced espionage series. The action begins when a terrorist, Karim Farouk (Oded Fehr), kidnaps an antiquities expert and blows up the tomb of Antony and Cleopatra. That sets off an international chase led by Danny McNamara (Matt Barr), a former F.B.I. agent who seeks out the help of an art thief, Lexi Vaziri (Sofia Pernas), who also happens to be his ex-lover. (While the show relies on the trope of a Middle Eastern terrorist, the creators try to balance that by having Lexi be Egyptian.) She’s quick to whip out her lethal gadgets; Danny’s the patient, mindful one. And the occasional sexual tension lends a bit of spice to an otherwise hackneyed plot. The show debuts with a two-hour episode, and will air at 10 starting May 28.

THE VOICE 9 p.m. on NBC. The final four contestants of this vocal competition — Gyth Rigdon, Maelyn Jarmon, Dexter Roberts and Andrew Sevener — had one last chance to showcase their talents yesterday, putting on three performances each. One of them goes home a winner after this two-hour season finale.

BLACK-ISH 9 p.m. on ABC. In the Season 5 finale of this family sitcom, Junior (Marcus Scribner) gets an offer to work for the hip-hop group Migos — his dream job. But there’s a fork in the road: His parents are less enthused and think he should return to college. The series has been renewed for a sixth season, and its franchise continues to grow. In addition to the spinoff “grown-ish” on Freeform, a prequel, “mixed-ish,” about Rainbow (Tracee Ellis Ross) growing up mixed-race in the 1980s, is in the works.

WANDA SYKES: NOT NORMAL (2019) Stream on Netflix. The actress and comedian Wanda Sykes wastes no time in her first Netflix special; She opens by saying that if anyone voted for President Trump and came to see her, they made another mistake. (We won’t publish her exact words.) She devotes much of the performance to politics, but also dives into reality TV, her family life and menopause. In a recent interview with The New York Times Magazine, Sykes said, “It is the job of a comedian to talk about the world and its problems,” but that shouldn’t be all: “I’ll do 20 minutes on race or Trump and then do a silly joke about having a hot flash.”

MOONLIGHT (2016) Stream on Netflix; Rent on Amazon, Google Play, iTunes, Vudu or YouTube. Barry Jenkins’ poetic tale about the life of a young, black gay man in Miami, told in three stages, seems to have set the bar for his later films: The movie took home three Oscars, including best picture, and tugs at the heartstrings from beginning to end.