A TALE OF TWO KITCHENS (2019) Stream on Netflix. Gabriela Cámara, the influential chef whose restaurants include Contramar in Mexico City and Cala in San Francisco, connected disparate parts of Mexico by bringing fresh coastal seafood to the landlocked Mexico City when Contramar opened in 1998. This short documentary, directed by Trisha Ziff, connects the Mexico City and San Francisco restaurants — and the cities themselves — by showing the day-to-day life in each, and speaking to some of the cooks and other staff who keep both running.

RASHOMON (1951) Stream on Kanopy; Rent on Amazon and iTunes. The Japanese actress Machiko Kyo died last week at the age of 95, bringing renewed attention to this breakout thriller from the revered director Akira Kurosawa. Kyo stars as the wife of a dead samurai. The plot presents four contradictory accounts of the circumstances surrounding the killing. When the film was shown at the Venice Film Festival in 1951, it was given the festival’s top prize, the Golden Lion. “Immediately, the film and its maker became international sensations,” the critic Phillip Lopate wrote in The New York Times in 2016. “It is easy to see why,” Lopate added. 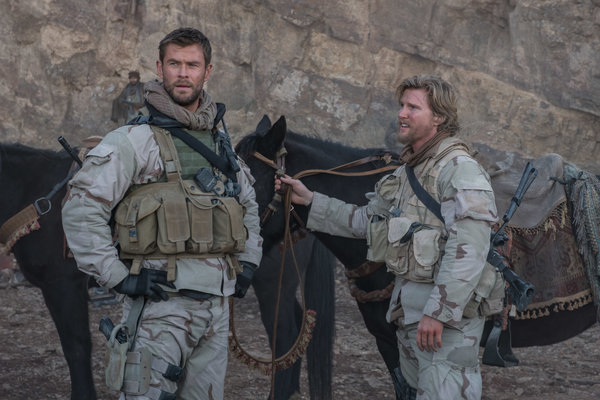 12 STRONG (2018) Stream on HBO platforms. Horses grunt alongside the human warriors in “12 Strong,” an Afghanistan-set war movie with Chris Hemsworth and two famous Michaels: Shannon and Peña. The actors play American soldiers who join forces with an Afghani warlord (Navid Negahban) to fight against the Taliban and Al Qaeda, in a story based on the nonfiction book “Horse Soldiers” by Doug Stanton. “For devotees of cinematic blowouts and dedicated students of screen masculinity (like me), ‘12 Strong’ is premium, Grade A catnip,” Manohla Dargis wrote in her review for The Times. “Directed by the newcomer Nicolai Fuglsig, it is generally watchable, if unsurprisingly easier on the eyes than on the ears or brain.”

THE WRESTLERS 10 p.m. on Viceland. The Canadian punk musician Damian Abraham hosts this globe-trotting new series, which centers not on music but on wrestling, diving into the different scenes worldwide. “As a lifelong wrestling fan, I’ve always felt there’s more to wrestling than just choreographed violence,” Abraham says in the introduction. “At the core of every wrestler, there is a storyteller, every ring a stage to reflect the struggles of its audience — whether it be gender, sexuality, race, religion or class.” Wednesday night’s episode follows the professional wrestling promoter Gabe Sapolsky on a tour of the United States. Later episodes will move out of the country, to focus on wrestling in Japan, Mexico and central Africa.

LIVE IN FRONT OF A STUDIO AUDIENCE: NORMAN LEAR’S ‘ALL IN THE FAMILY’ AND ‘THE JEFFERSONS’ 8 p.m. on ABC. Norman Lear helped define the American sitcom through developing “All in the Family” and “The Jeffersons,” among others. The 96-year-old Lear teams up with Jimmy Kimmel to host this tribute to those two shows, which features celebrities like Woody Harrelson, Marisa Tomei, Jamie Foxx and Wanda Sykes in live re-creations.