In September 2016, Renate Hartman attended the Association for Women’s Rights in Development International Forum conference in Bahia, Brazil. Also called “Feminist Futures,” it drew 2,000 people from around the world working for women’s and L.G.B.T.Q. rights.

As Ms. Hartman,50, a manager of international projects at COC Nederland, a Dutch L.G.B.T.Q. advocacy group, entered a massive, crowded room, she felt relief when she spotted a Nigerian activist friend. She led Ms. Hartman to a table with her friends. One of them was Melinda Michels, 49, the director of the Emergency Assistance Program at Freedom House in Washington, which supports marginalized groups in countries with authoritarian governments.

Ms. Michels, who goes by Mindy, was with a Canadian friend, and so Ms. Hartman, who lives in Amsterdam, thought she was also Canadian. Ms. Hartman was taken by her curly hair.

The two spent some time together, and a couple of months later, they saw each other again at ILGA Asia, the International Lesbian, Gay, Bisexual, Trans and Intersex Association’s conference in Bangkok. While they felt a strong attraction at both gatherings, Ms. Hartman was up front with Ms. Michels about already having a partner, though that relationship was rocky. Their budding friendship remained platonic.

After Ms. Hartman returned from Bangkok, she and her partner broke up.

In January 2017, Ms. Michels and Ms. Hartman met in Dublin on a planned trip.

“I’m crossing the Atlantic to meet someone I haven’t even kissed,” Ms. Michels told her friends. “They all thought, ‘This could go so horribly wrong.’”

In fact, the opposite happened.

“We laugh so much together,” Ms. Michels said. “Plus, at this stage of life you just know what works for you and what doesn’t.”

“Of course, there are the irritations and frustrations,” Ms. Hartman said, “but we manage to work through them and things don’t escalate. We’re able to talk them out and get on the same page again without too much effort.” 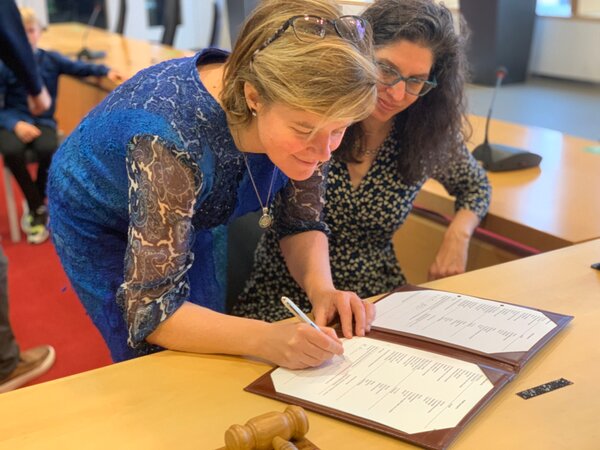 Each has a son from a previous relationship, and both boys love each other, Ms. Hartman said, despite the fact that her son, Stijn, 10, hasn’t begun learning English yet.

Marriage wasn’t in their immediate future, since Ms. Michels was only going to move to Amsterdam after her son, Levi, 15, finished high school.

Their last pre-pandemic visit in Amsterdam was in February 2020, for Ms. Hartman’s 50th birthday, and then the world shut down. While they hadn’t gone more than two months without a visit, they suddenly couldn’t see each other for five months, as now both were not allowed in each other’s country.

After extensive research, Ms. Michels found that Turkey would allow them both in, so in July 2020, they stayed in a villa in Turunc, on the southern coast. Ms. Hartman overcame her desire to wait for a wedding with friends and family, and proposed to Ms. Michels there by memorizing a poem by Audre Lorde, a favorite poet of Ms. Michels.

In October 2020, the Netherlands created a special visa for partners of Dutch nationals from other countries to enter during the coronavirus pandemic. Ms. Michels went to Amsterdam, where she has been since, working remotely. In a document Ms. Michels compiled to prove their relationship, she counted 28 individual visits and trips they’ve made together, to destinations such as Tulum, Mexico, Cape Town and Oslo.

They were married Dec. 11, by Maria Geus, a civil registrar at Stadsloket West, a municipal branch of city government in Amsterdam, with both their sons present. (It was possible for Levi to attend since he attends an international school in Geneva.)

“Covid has made having a family relationship important to us,” Ms. Michels said. “We don’t want to ever be in the position again where we can be prevented from seeing each other.”