WHEN Kia Gott was struck down with the worst case of meningitis doctors had ever seen, her parents were asked if they wanted to continue with treatment – or let her die.

Kia, who turns four in December, was just learning to crawl and clap when she caught a rare strain of the disease at nine months old, leaving her fighting for her life with black arms and legs. 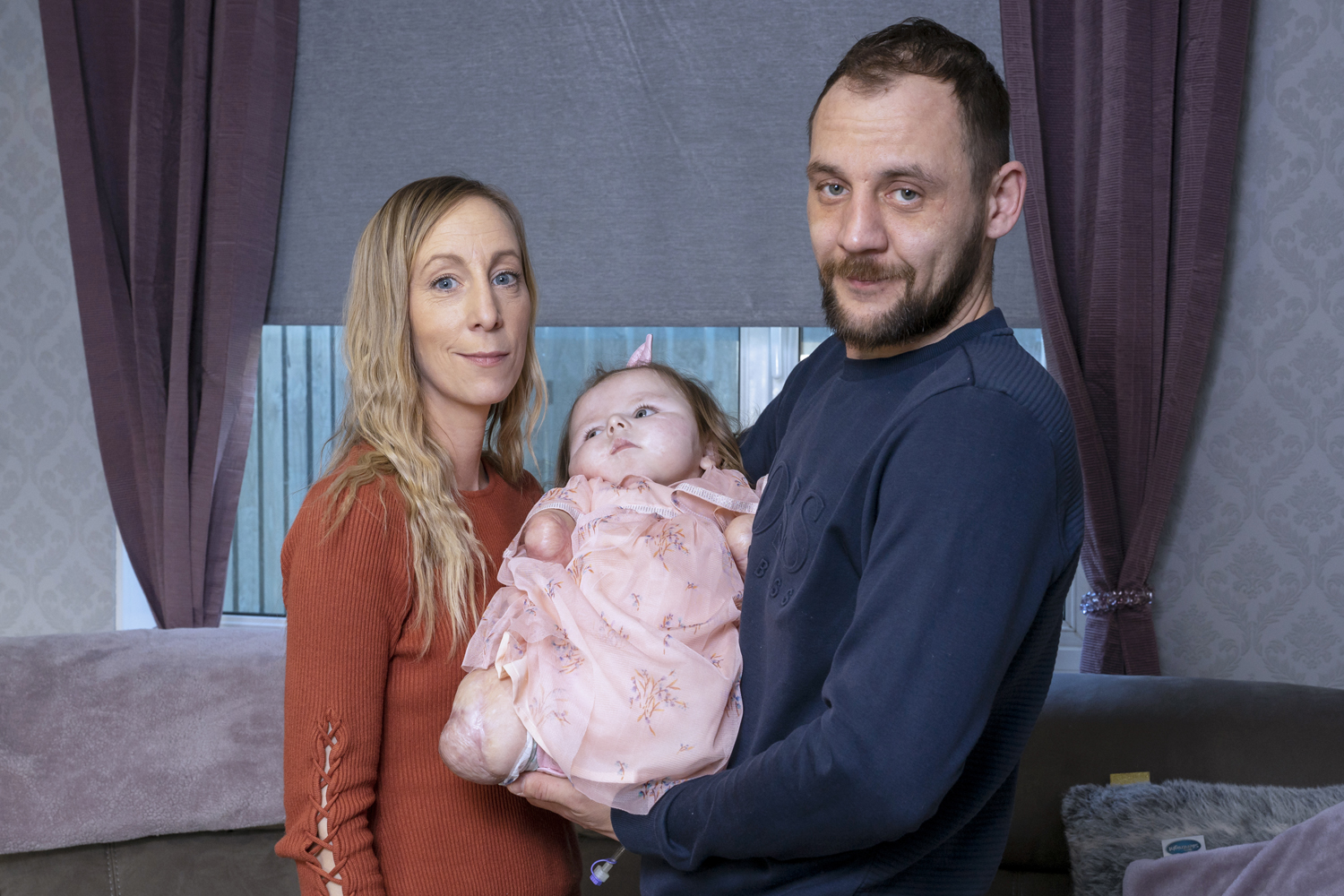 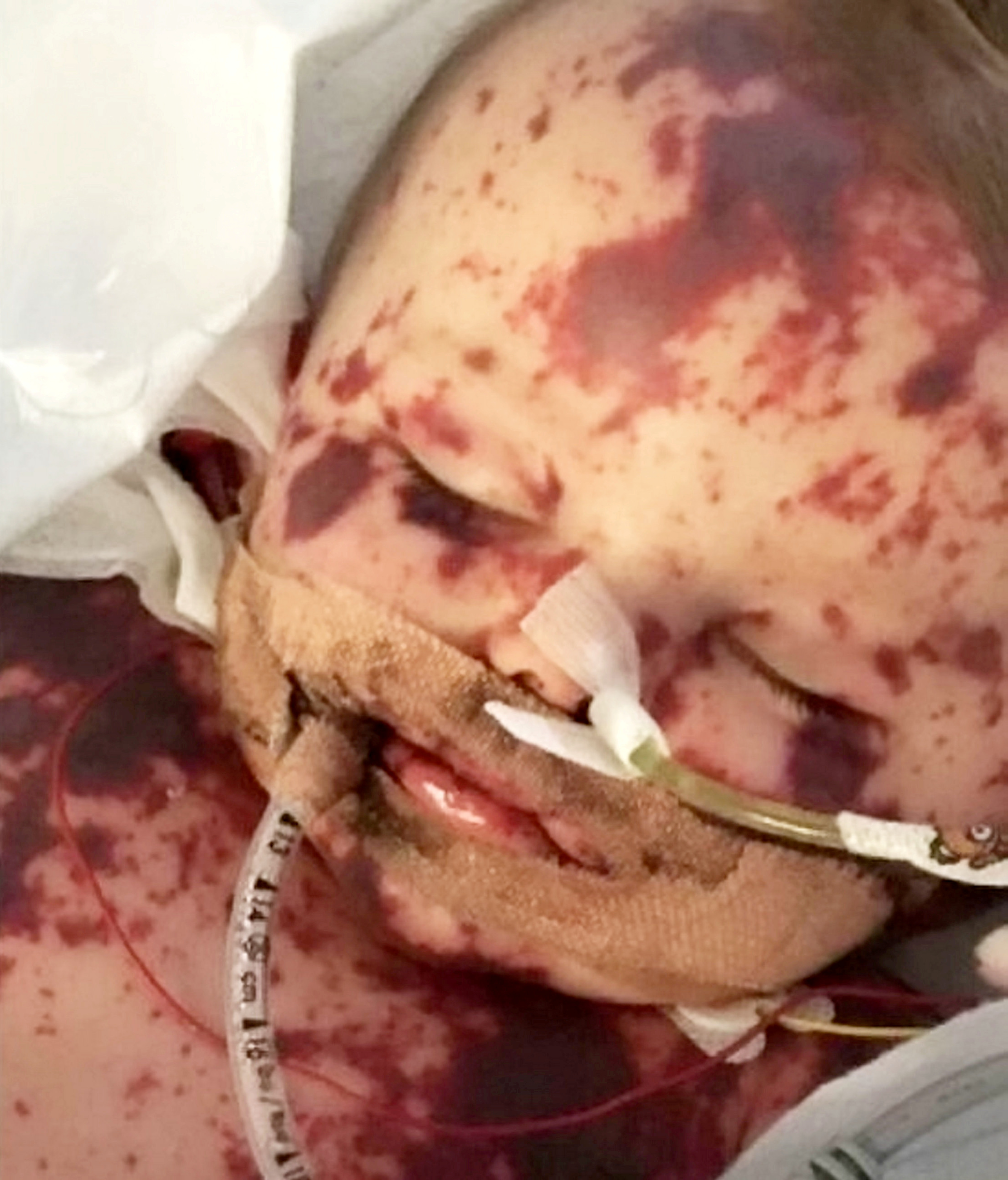 She ended up having all four limbs amputated and was left severely brain damaged.

But mum-of-four Vikki, 33, and dad Paul 38, never lost their determination to bring their daughter home to Bradford, West Yorks, and they finally got their wish in June 2018 – after 10 months in hospital.

Now two years on, Kia is set to have her first day at school on Monday, marking a huge milestone for the family.

"Kia's doing a lot better than the doctors ever thought she ever would," Vikki says, in an exclusive chat with Fabulous. 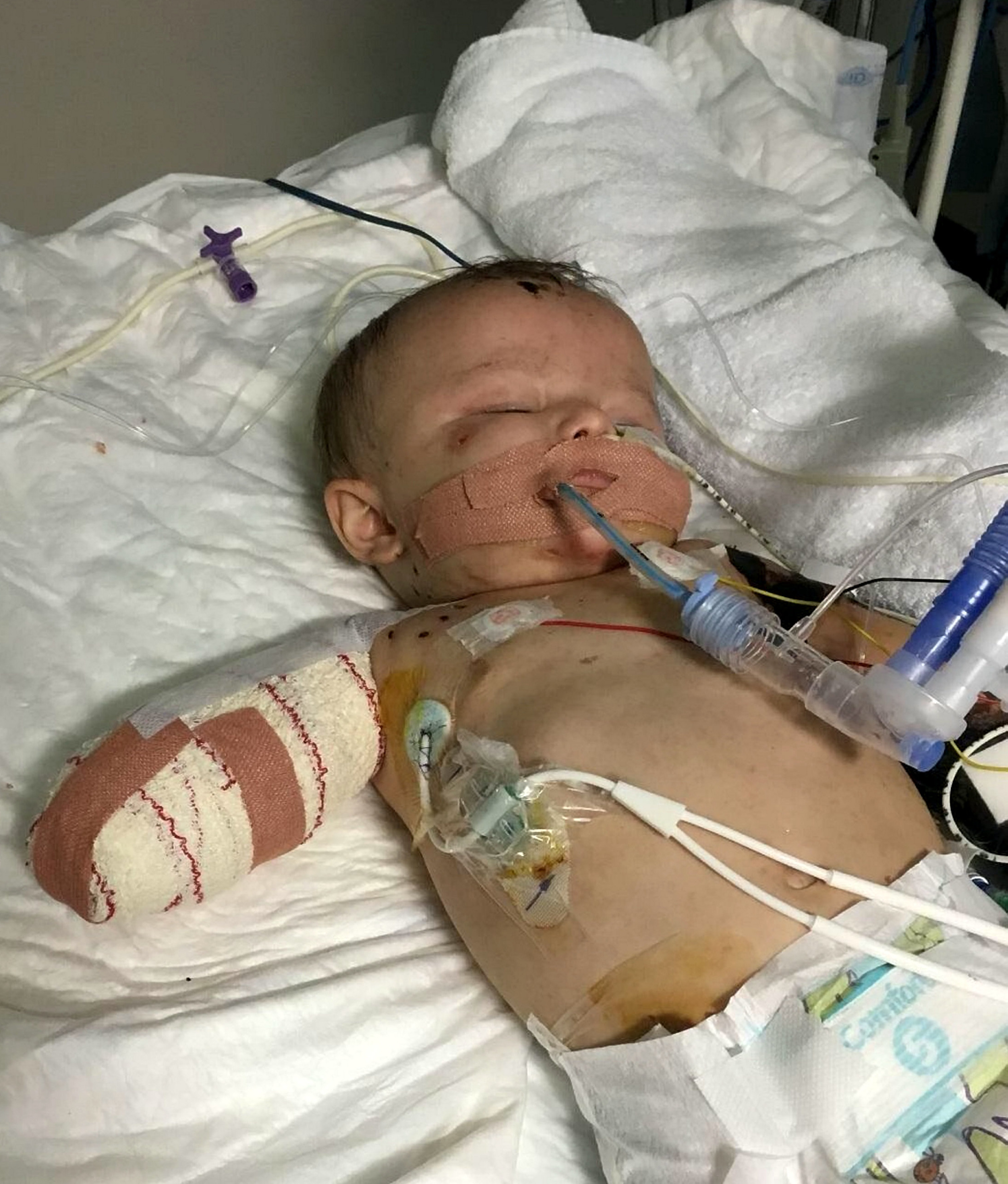 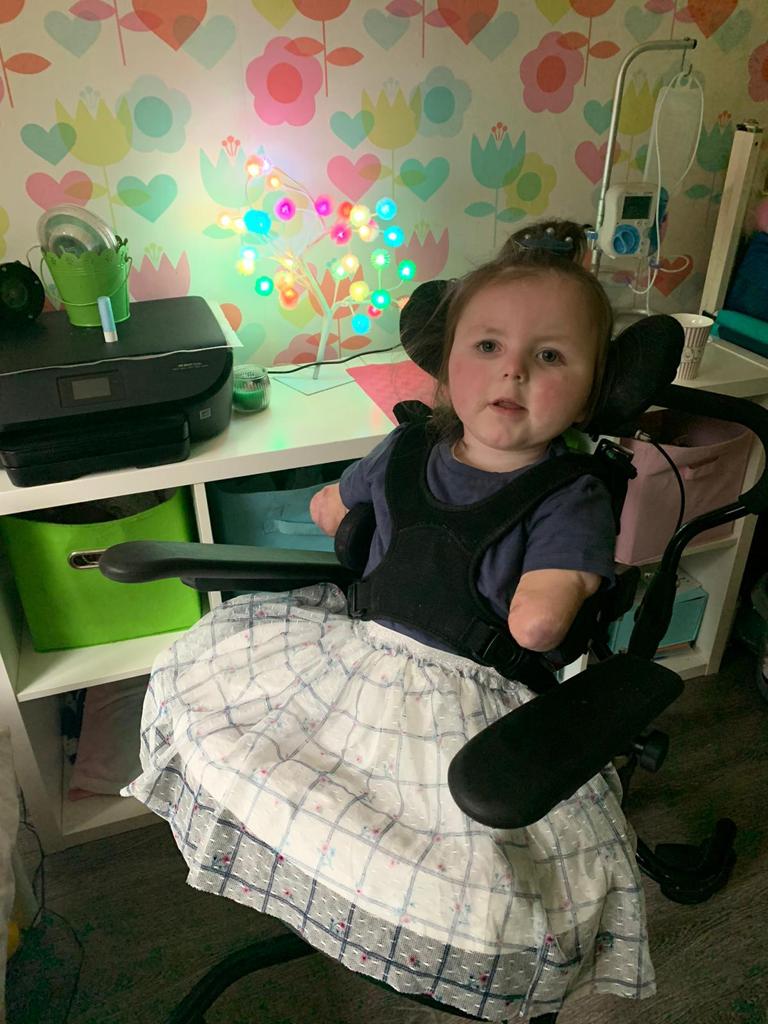 "Her muscles are strengthening, she’s got better head control and she has a proper smile now.

"She can tell if it's me or Daddy speaking to her. She still can't speak or eat but she's going to a special school after half term, for three hours-a-day.

"They do a lot of sensory work so that should help with Kia’s progression.

When I look back to doctors asking me if we should stop her treatment, I did think 'am I just being selfish?' But something told me she was still fighting. The way she is now proves I was right

"I’m excited about her going, I was a bit wary with coronavirus but the stimulation will only help her improve.

"I’m not pinning my hopes on anything specific because she is severely brain damaged, but anything she does achieve is a bonus.

"When I look back to doctors asking me if we should stop her treatment, I so nearly leaned towards that, because you think ‘they’re the professionals, they know what’s right, am I just being selfish?’

"A lot of things go through your head but something inside told me she was still fighting and there was a reason to keep fighting for her. The way she is now proves I was right." 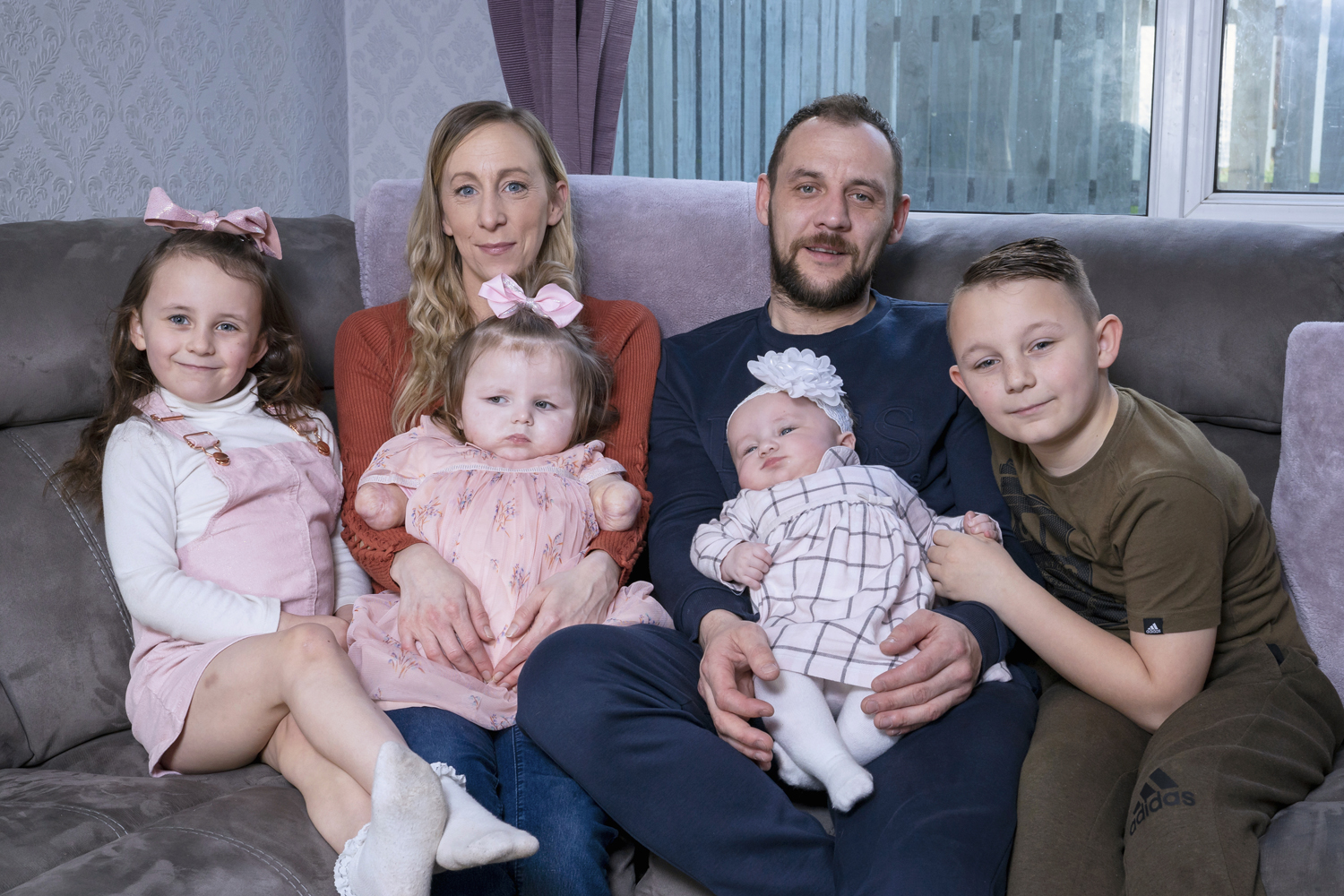 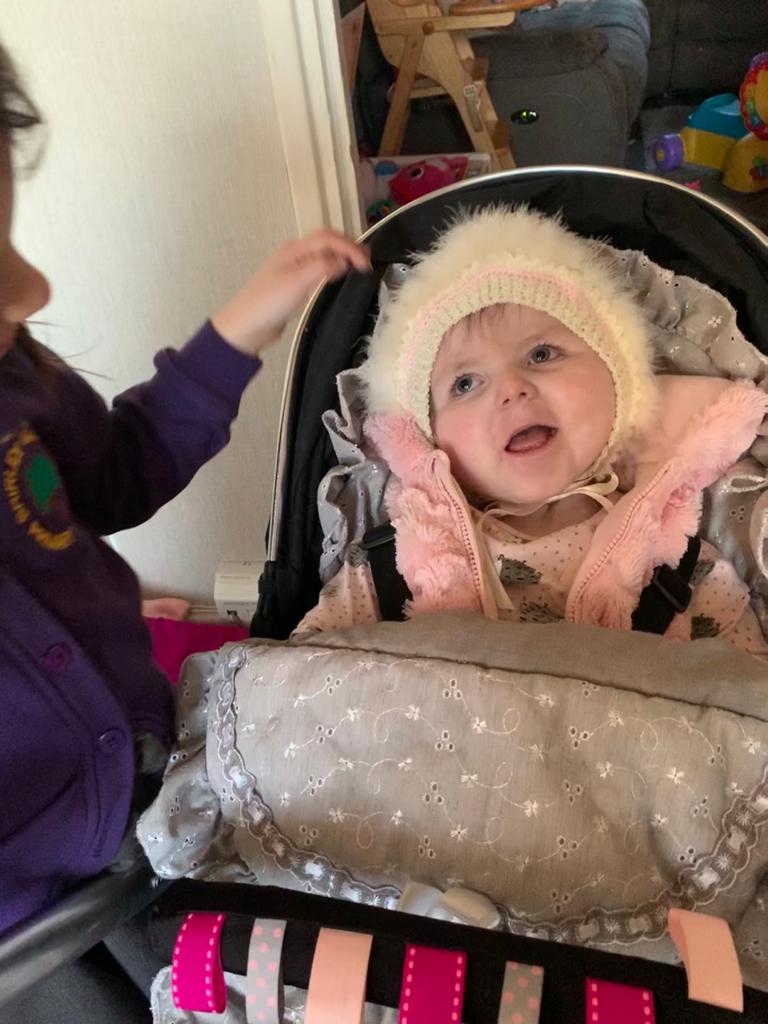 Doctors warned Vikki and Paul their daughter was almost certainly blind, and would never be able to move herself or smile – but Kia has proved them wrong at every stage of her journey.

Vikki says: "I remember when she first started smiling, it would just come up on one side of her mouth and I thought ‘is she?’

"It was always when I’d speak to her, sing or try to give her a little surprise.

"So we just kept playing with her and the more we did that, the more her smile grew.

"I couldn’t believe it at first. Now we know she is happy, which is the most important thing, because she can show it through her smile." 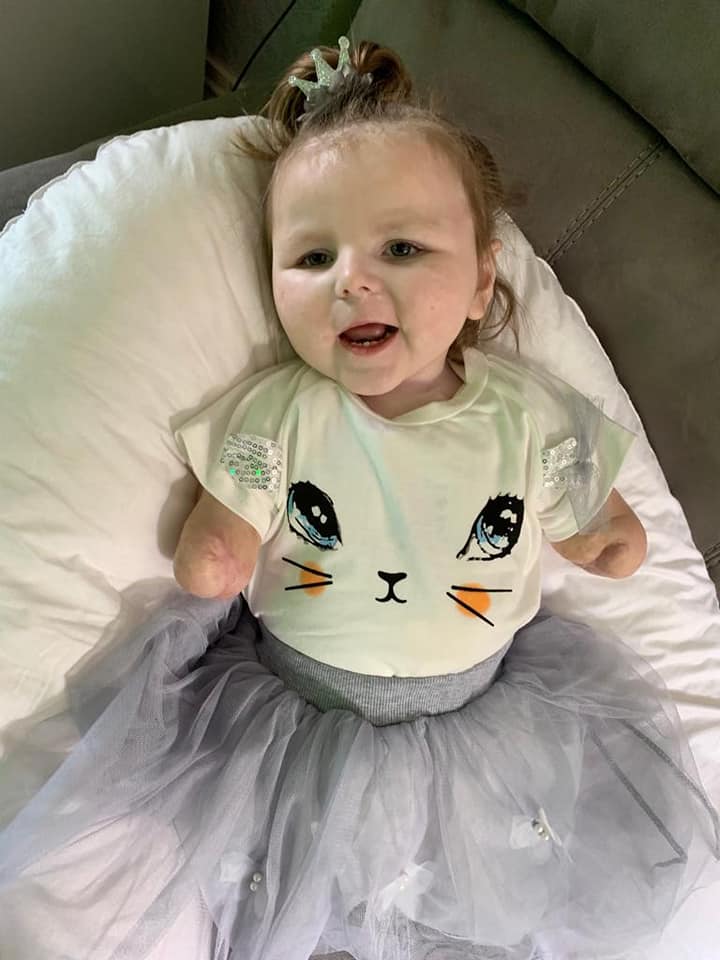 Vikki and Paul are also parents to son Kayden, 11, and daughters Elsie, seven, and Espe, two.

Currently, they are both full-time parents and carers to Kia, although Paul hopes to return to work as a window fitter when Espe starts school in two years time. 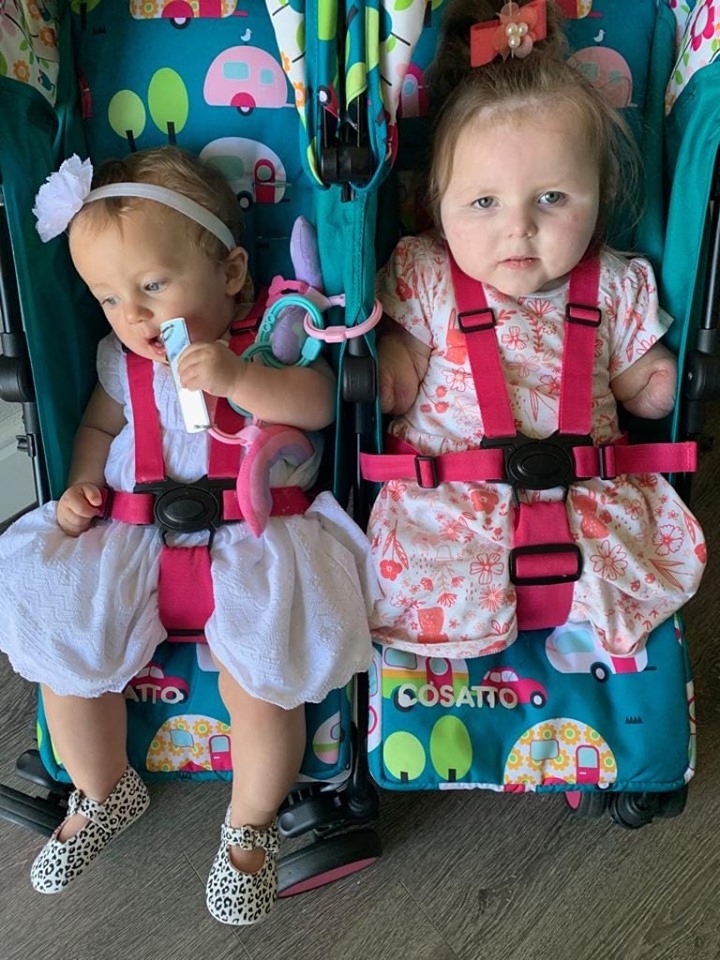 Vikki says: "Daily life is challenging. Kia’s still peg fed through a tube that goes into her tummy.

"Normally when I get up at 6.45am I'll change her nappy, because she’s still in one, then I'll check if her machine has finished feeding her milk from overnight.

"I give her medicine in the morning because she’s epileptic. Then I'll get her washed and dressed.

"By 7.30am my two-year-old will be awake, so I'll get her dressed, give her breakfast and change her nappy in between.

"I have two other children so life’s never easy, but we manage." 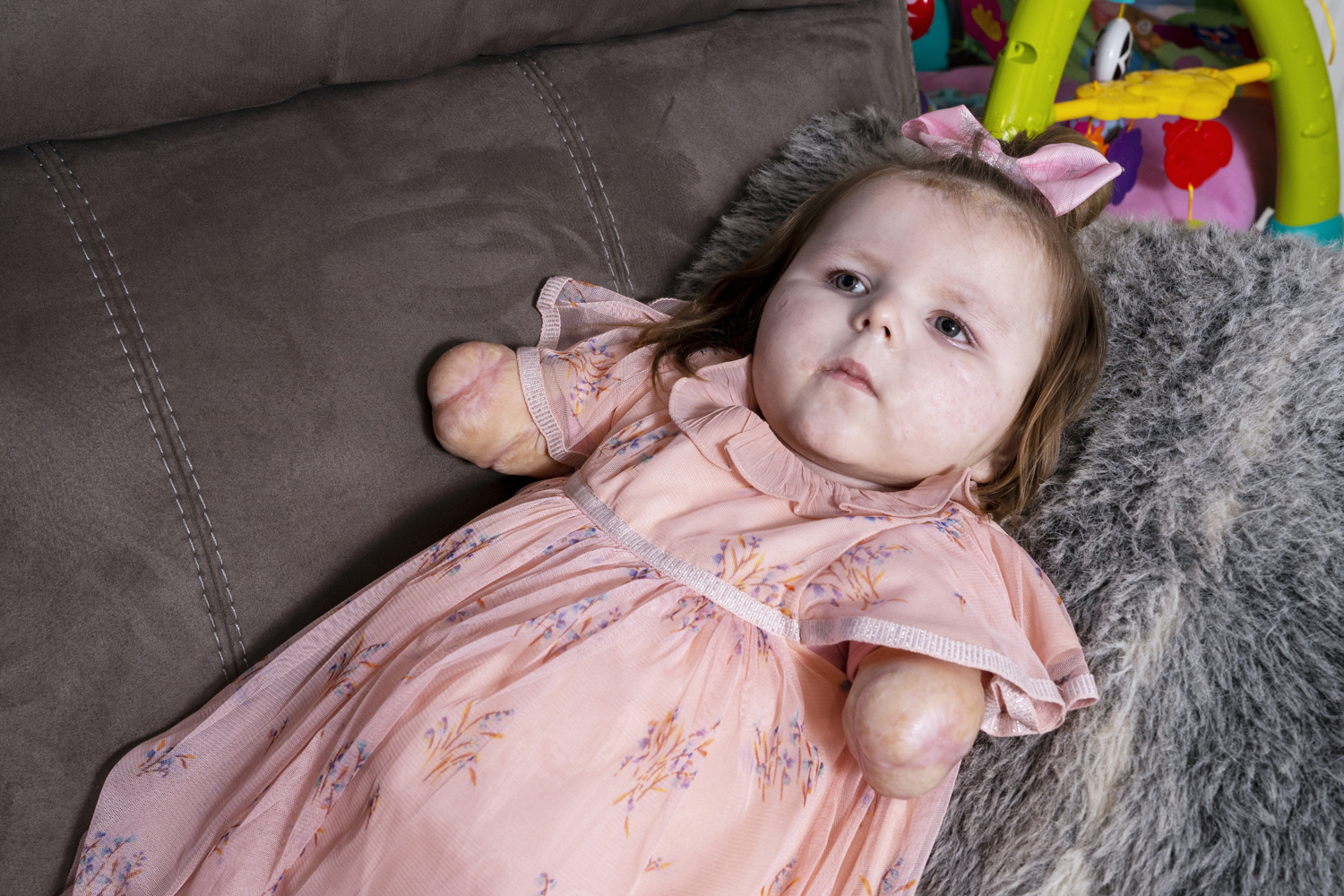 Kia was a playful baby when she fell ill in September 2017, months before she was able to get her meningitis jab aged one.

Doctors told her parents she had the worst case of Meningitis C septicaemia (blood poisoning) they'd seen in 25 years – as well as "high brain damage".

While in hospital, Kia had seven operations, including separate amputations for each of her limbs and one to insert her feeding tube into her stomach.

But since coming home she's only been readmitted to hospital once, when doctors were concerned about her breathing, with Vikki saying: "Touch wood we've never been back overnight." 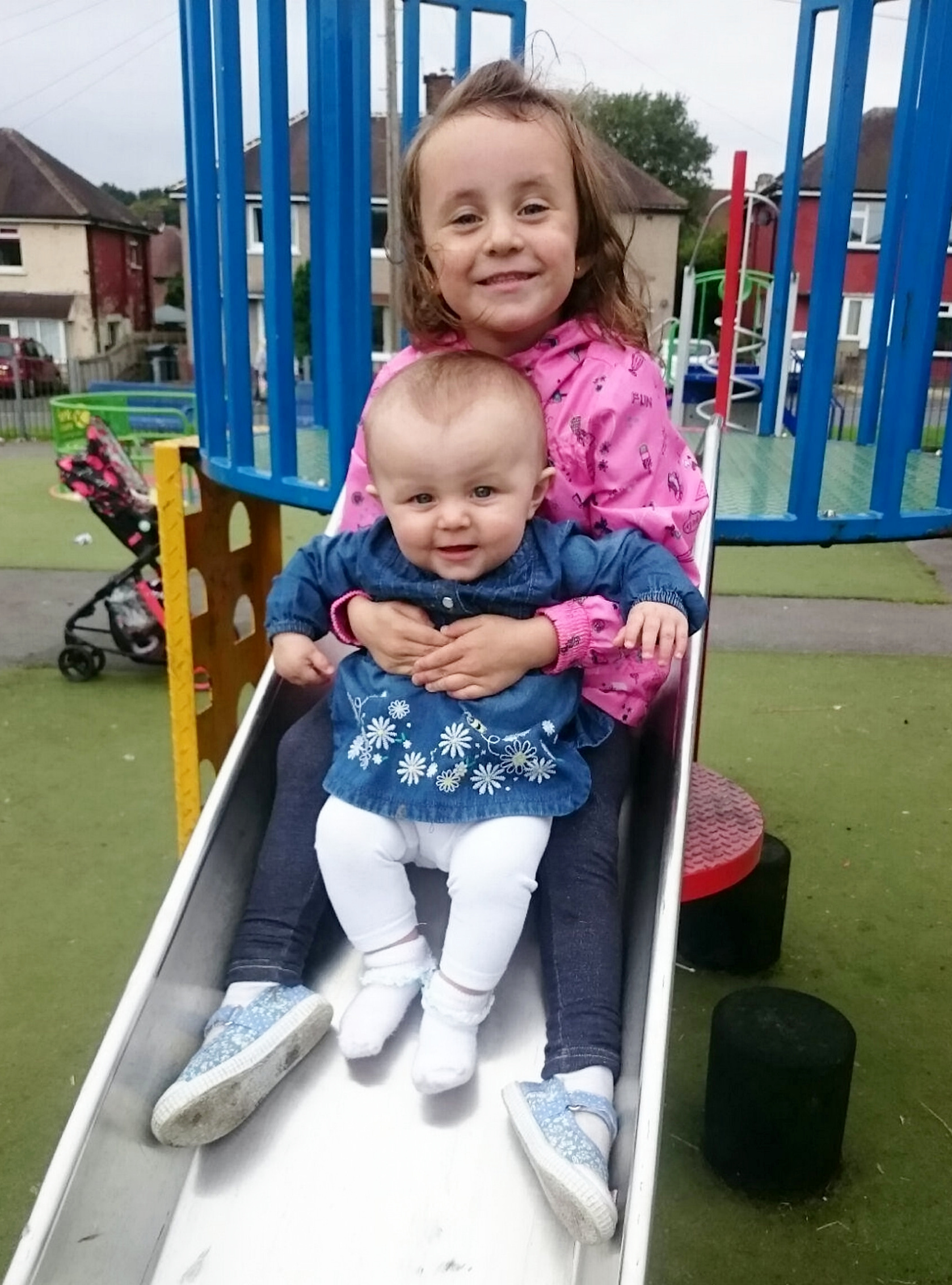 She adds: "When I look back, it feels amazing, I can’t believe how quickly Kia recovered from poorly she was.

"At the time, you go into autopilot, but now I can appreciate what a strong little girl she is.

"Kia's a happy child, she can only really communicate through smiling or crying, but she doesn’t often cry, only if there's something bothering her stomach or she’s got a dirty nappy."

The way I see it, we've already been through the worst, so nothing else is really going to challenge us

Kia now has two specialist wheelchairs, or for inside and one for outside the house.

Her mum says: "Kia will never be able to do a lot of the things other people take for granted.

"She can’t brush her hair or her teeth, she can’t sit up or walk into a room.

"But I believe as long as I can help her with those things and keep her involved in our normal day to day routine, then she’s living a good life.

"We just take every day as it comes. We are still unsure of her future, there are underlying health conditions that could arise in the future, and she’ll have to have more operations on her limbs.

"But the way I see it, we've already been through the worst, so nothing else is really going to challenge us." 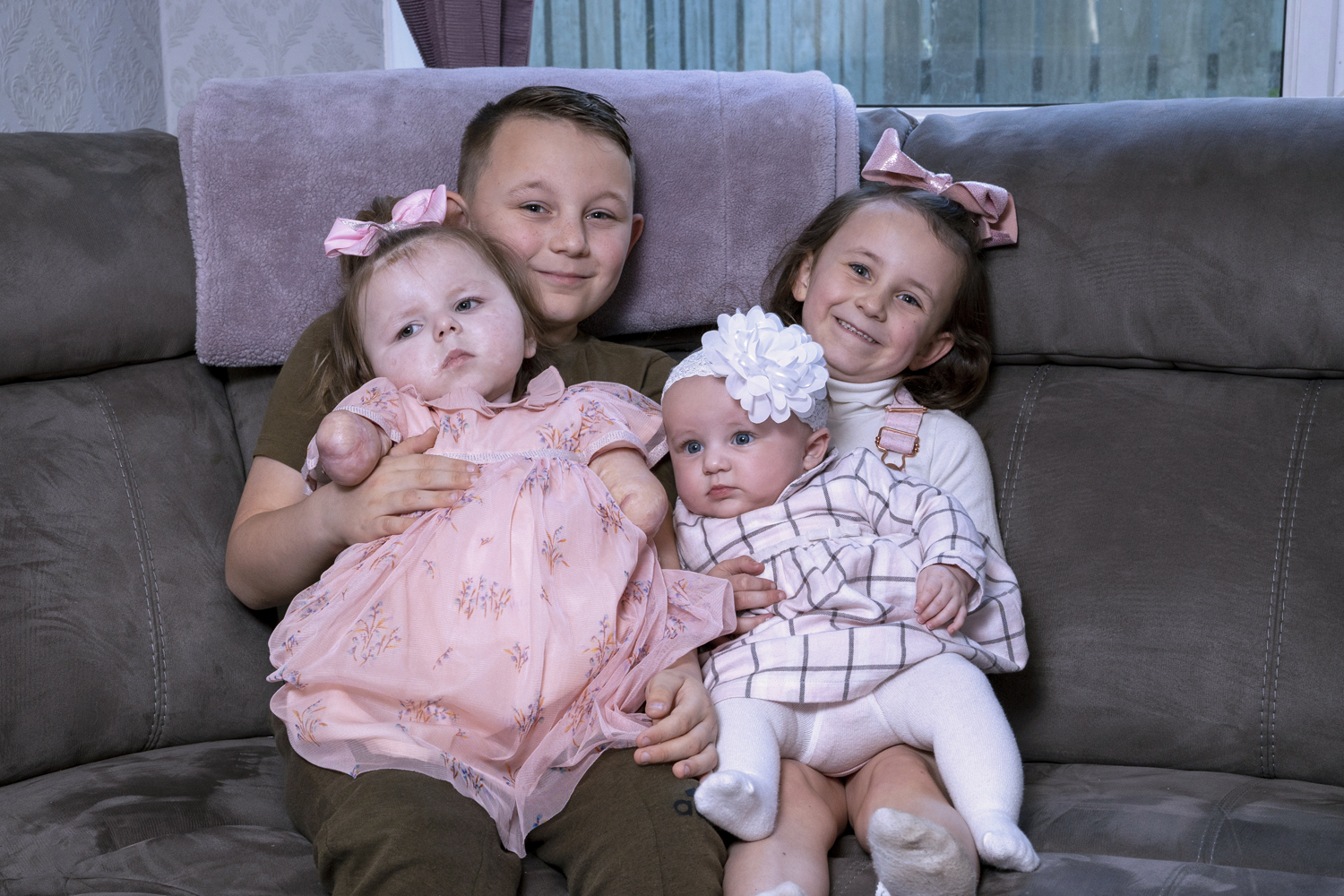 Despite Vikki's positive attitude, the pandemic was particularly difficult for the family, who were not only shielding but trying to keep Kia separate from her siblings, so she wasn't put at risk.

Vikki says: "It was really hard, especially at the beginning. We did almost four months of shielding.

"I pulled my older two children out of school before they actually closed down, from early March.

"Because Kia’s classed as vulnerable, we had to all stay in. But then I had to keep her in her room and limit her time with the family, because of the risk of someone catching coronavirus and passing it on.

"It was really difficult, we were stuck in constantly and having a young one as well.

"We were glad to get a bit of normality when our two eldest went back to school last month.

"Kia was due to start school in September too, but I wasn't comfortable sending her.

"I wanted to wait and see how it was with coronavirus, but I'm hoping to send her on Monday to join after half term." 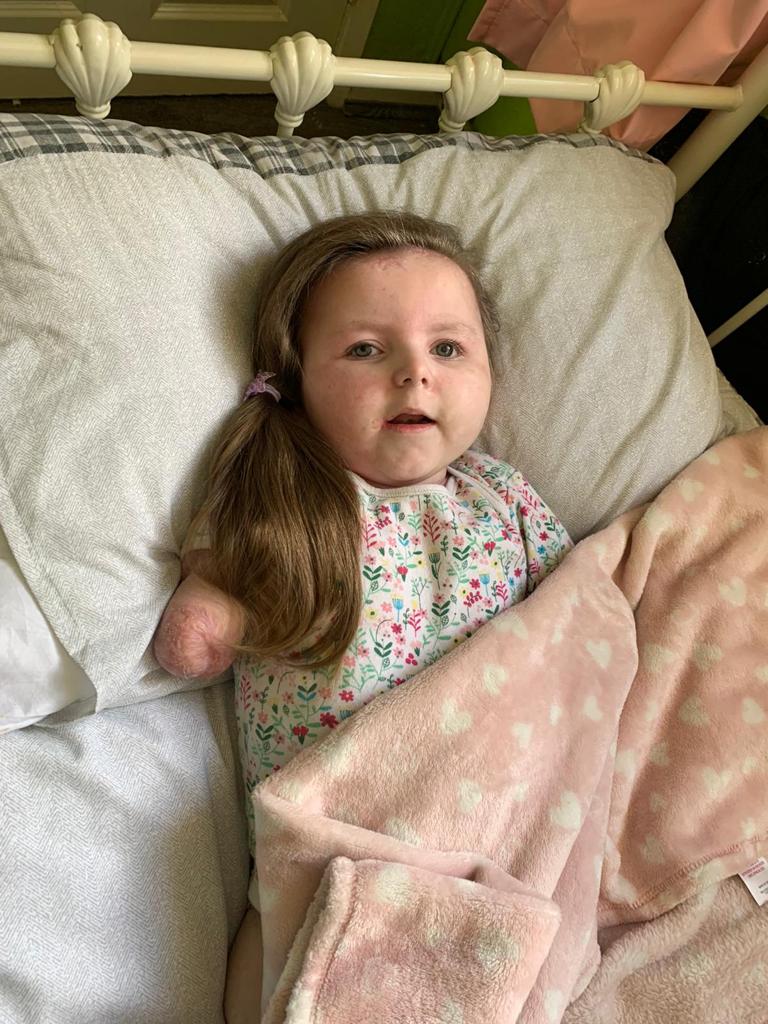 The thought of an unknown virus killing and leaving people with long-term conditions was particularly frightening for the Gott family, having seen the devastating effect of bacterial meningitis on their little girl.

Vikki says: "It did affect how I felt about it. I remember another mum saying to me ‘there’s no evidence children suffer severely from it’.

"I just said ‘who thinks their child’s going to catch meningitis? They don’t, but mine did’.

"So I don’t want to take that risk with Kia, you can’t ever be too safe and that’s one thing I’ve learned."

During Kia's stay in hospital, dad Paul looked after her siblings at home, while Vikki slept round the corner from Leeds General Infirmary (LGI).

Vikki said: "I just want to say thank you to all the nurses and doctors at LGI, on the intensive care unit, high dependency unit and children's ward.

"That hospital was like my second home for 10 months and I sat next to Kia's bed all day every day.

"I don't know how I would have made it through without those nurses, they were my friends and my psychologists."