FOR as long as Kathryn McClean can remember, going to the beach with her family has often ended in tears.

“My daughter, Sophie, had some sensory issues, so she hated the feeling of sand on her body as it made her really itchy,” the 39-year-old mum tells Kidspot. 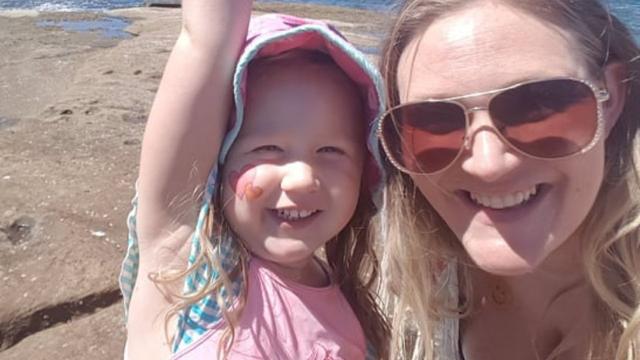 “Then sending her into a cold shower that didn’t get it all off was a real nightmare. Sometimes she would refuse to go and scream, so I would have to pile her in the car with all this sand on her."

Desperate to alleviate Sophie’s discomfort, Kathryn even took a bottle of talcum powder to the beach one day.

“When she was little, I tried to use baby powder once and not only did it make a huge mess, it didn’t work very well and I wasn’t prepared to use it again on Sophie as I didn’t know what ingredients were in it and how harmful they could be,” the Brisbane mum says.

“Back then, I thought, ‘Why can’t someone make a natural version of this that actually does the job?’”

So when she was made redundant from her role as a travel agent in April last year, Kathryn decided that instead of searching for another job at the height of the pandemic, she would use her skills in making her own deodorant and try developing a powder formula of her own.

“I only wanted to make something that was all-natural, organic and ocean safe without being tested on animals.”

The all-natural business idea based on the popular hack

The reality of making her business dream come to life, however, was far more difficult than she expected.

For four months, Kathryn made countless combinations of plant and mineral-based powders, then took batches of them to Brisbane’s Streets Beach to test out on her partner, Piper, and nine-year-old daughter.

After many, many failures, Kathryn fondly remembers the day she finally got it right.

“I gave my partner a bag of powder and after a few minutes he said: ‘Oh my God, this is it, watch this!’ He walked into the water and came back with his feet and legs covered in sand and he sprinkled some powder on and it worked just as I’d envisaged it in my brain. It was just amazing.”

Then she tried applying it to Sophie’s skin in between sunscreen applications, and much to her relief, it worked a treat.

“Putting on sunscreen at the beach used to feel like sandpaper, but this just takes just a few seconds to pat yourself dry, even to the point of just being damp, then you shake the powder directly on your skin and either brush it off or rub it in like a cream. And the sunscreen goes on smoothly straight after.”

While they knew they were onto something unique, taking the brand-new product to market was a huge financial risk for the already cash-strapped family.

Before her business, Salty Sister, could launch in April last year, Kathryn spent most evenings from 8 pm until 3 am working on everything from packaging to social media.

“I’ve had a lot of sleepless nights but it was such a rush,” she says. “Because we were so excited, it wasn’t a drag at all.”

In August, Kathryn’s tireless work had paid off – and then some – when she chosen for a Sunrise segment during the weather called Sam Mac’s “plugapalooza” which features local Aussie businesses.

Without any financial investment whatsoever (all she did was send an email) the mumpreneur was gobsmacked to find she had sold $13,000 worth of product in the 24 hours after she went on air.

“My spot was only 42 seconds and by the time I looked down at my phone, there were thousands of dollars of orders going through, almost crashing the website,” she says. “I nearly burst into tears from happiness, I was so overwhelmed.”

The summer must-have for beach-loving families

Today, Salty Sister – which sells for $29.95 for a 165-gram bottle (about 30 to 50 applications) – is still the only product of its kind in the Australian market. It’s a fact Kathryn is immensely proud of but also brings major challenges.

“It’s daunting because we have to educate people on what we are because it didn’t exist before – and that we are not talcum powder!”

This mum is so determined to succeed that she’s vowed she’ll never go back to her nine-to-five.

“Losing my job turned out to be a blessing,” she says.

“This business ticks all my boxes. I do it all during school hours and it gives me a great work/family balance. I’ve always wanted to do work that makes a difference to other people and so many people have said it’s helped them. I have big plans for Salty Sister – not just in Australia but overseas as well.”

And yes, the best part is that beach visits this summer will be tear-free for this Queensland sun-living family. 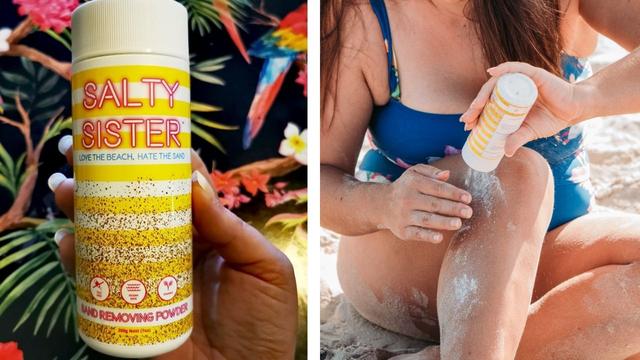