A MUM was heartbroken to discover the real reason her 13-year-old son was “not concentrating” on his schoolwork after telling him off.

Sophie Huggett, 48, said her son, Daniel, could not remember what he had been taught in online classes, making her think he was not paying attention. 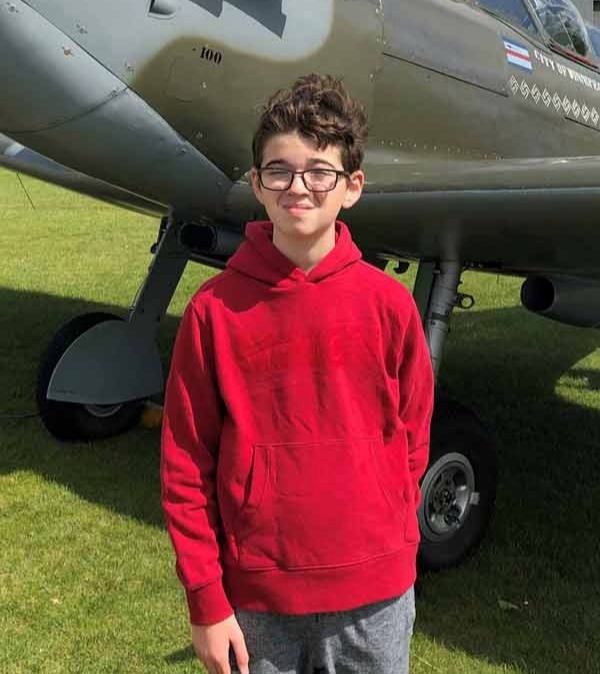 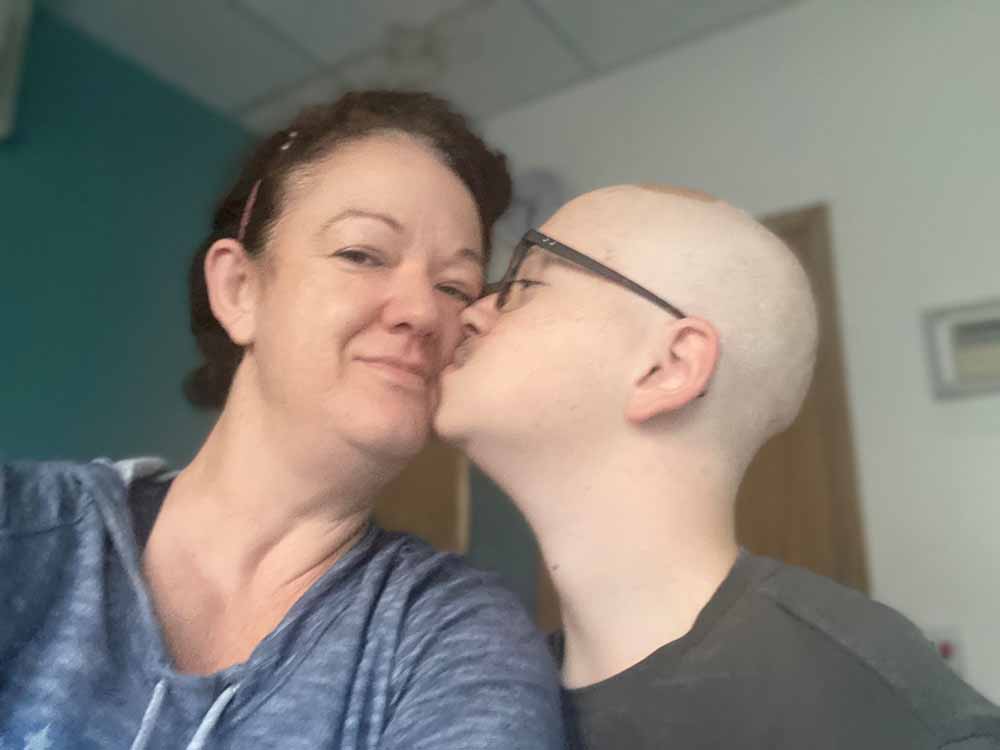 He had also lost interest in reading – a hobby he loves – and had started squinting when reading the computer screen.

Sophie, a nurse from Stonecross, Eastbourne, East Sussex, took Daniel to the optician in February 2021, and the medic immediately realised something was wrong.

Daniel was sent straight to A&E – where doctors found a potentially deadly and cancerous brain tumour.

His diagnosis was confirmed just five days later – a “jagged, tree-like” 4cm tumour, deep in his brain wrapped around his brain stem.

Since then, the youngster has been through a battle of several-hour operations, one which led to an induced coma for 21 days.

In June, the family were given the devastating news that Daniel’s cancer has spread to his spine.

In order to get pioneering treatment on the NHS, Daniel is recovering in hospital and gaining strength for the six-week therapy.

Sophie, who also has a younger son, Matthew, 12, with her business manager husband, Andrew, 52, said: “He can’t move his legs yet. He can’t hold a cup and he’s still tube-fed.

“Before he can come home, he needs to be able to eat and drink, to walk, bear his own weight and use the toilet.

“To be able to talk would be nice, too. He can now almost manage to say ‘I love you,’ which is a really amazing milestone – but he’s terrified he’s not going to be Daniel again.”

Daniel first started having strange symptoms in the summer of 2020 – around the same time as he was prescribed tablets by his doctor for migraine-style headaches.

He had unsteadiness on his feet, shaky hands, headaches and difficulty remembering schoolwork.

Sophie said: “He was always laughing it off, so I didn’t really think about it.”

His parents were more concerned by his sudden lack of interest in reading – he had previously devoured books and loved telling his parents about them.

He couldn’t remember his history lessons from the previous week.

“But, from about December, when I asked him he’d say, ‘I’m having trouble remembering what happened at the beginning’", Sophie said.

“After that, he lost interest in things more and more. He couldn’t remember his history lessons from the previous week.

“I feel bad now because I told him off for not paying attention.”

After Christmas, Sophie realised Daniel was squinting at the screen during his online lessons and so she booked him in for a check-up with the optician.

Sophie said: “If I hadn’t taken him to see the optician when I did the surgeon said Daniel wouldn’t be here now.

“We have a lot to thank the optician for.”

When checked over at Hailsham Specsavers on February 1, the optician asked whether Daniel had recently had a head injury which made Sophie's "blood run cold".

The optician had found Daniel’s optic nerve behind both eyes to be “completely” swollen.

They advised a worried Sophie to take Daniel straight to A&E at Eastbourne District General Hospital – even writing an urgent letter for Sophie to hand in at the A&E desk. 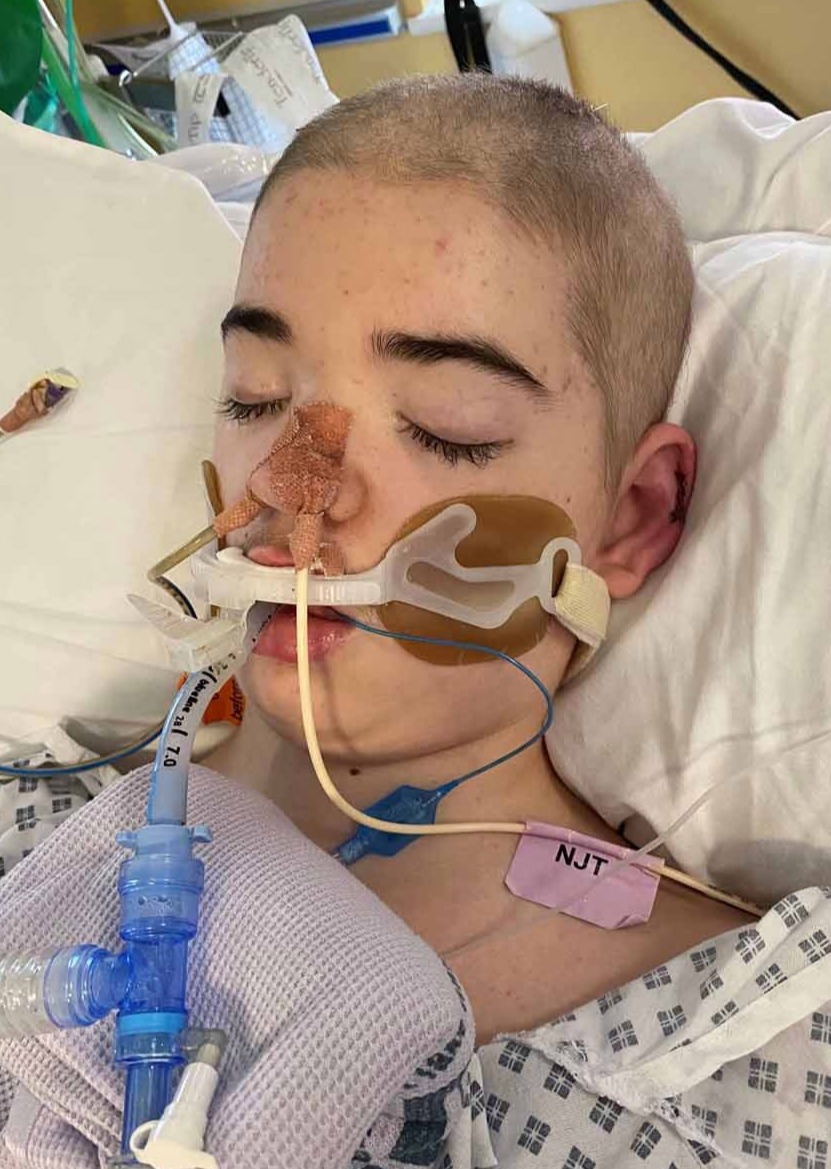 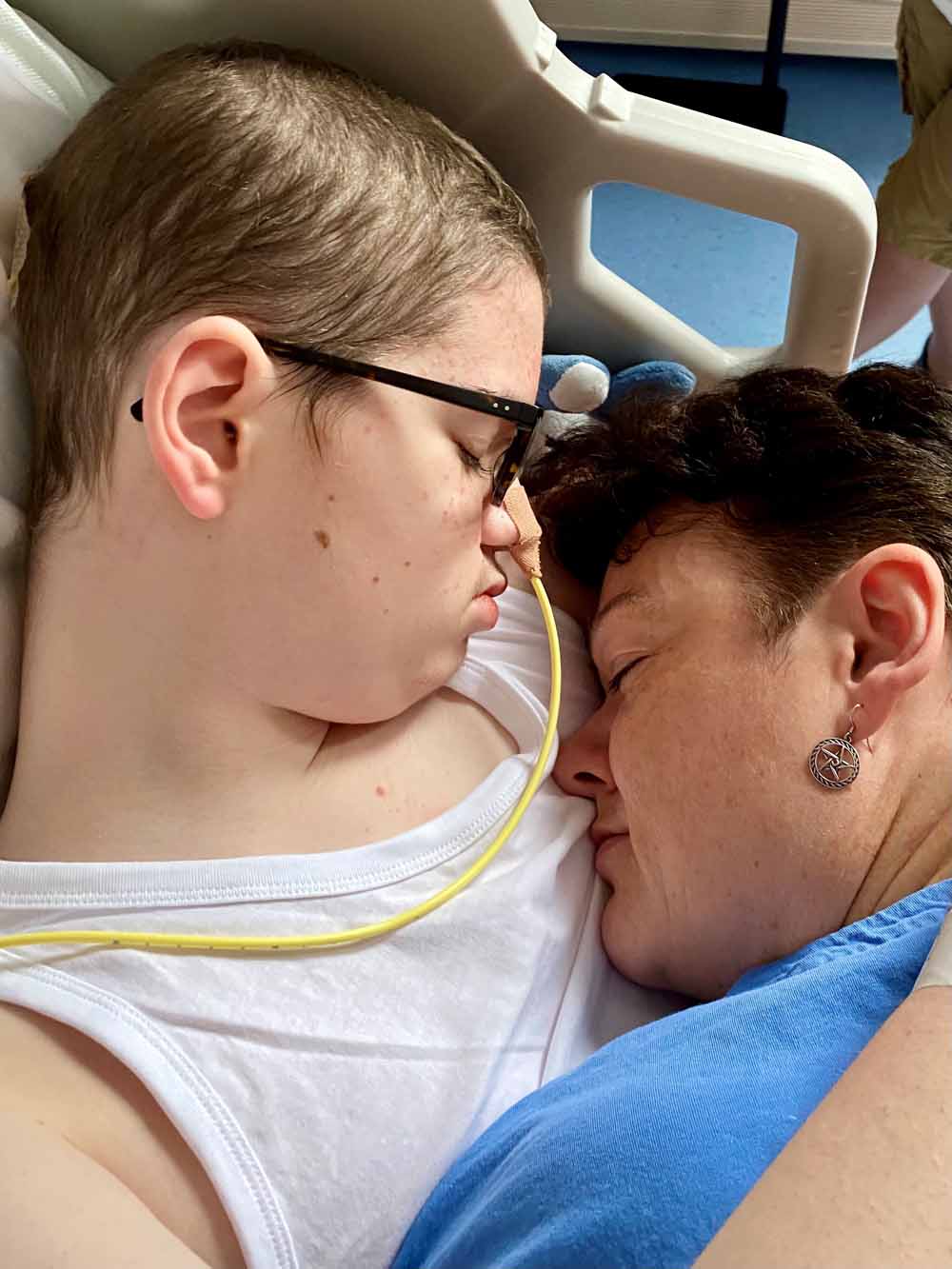 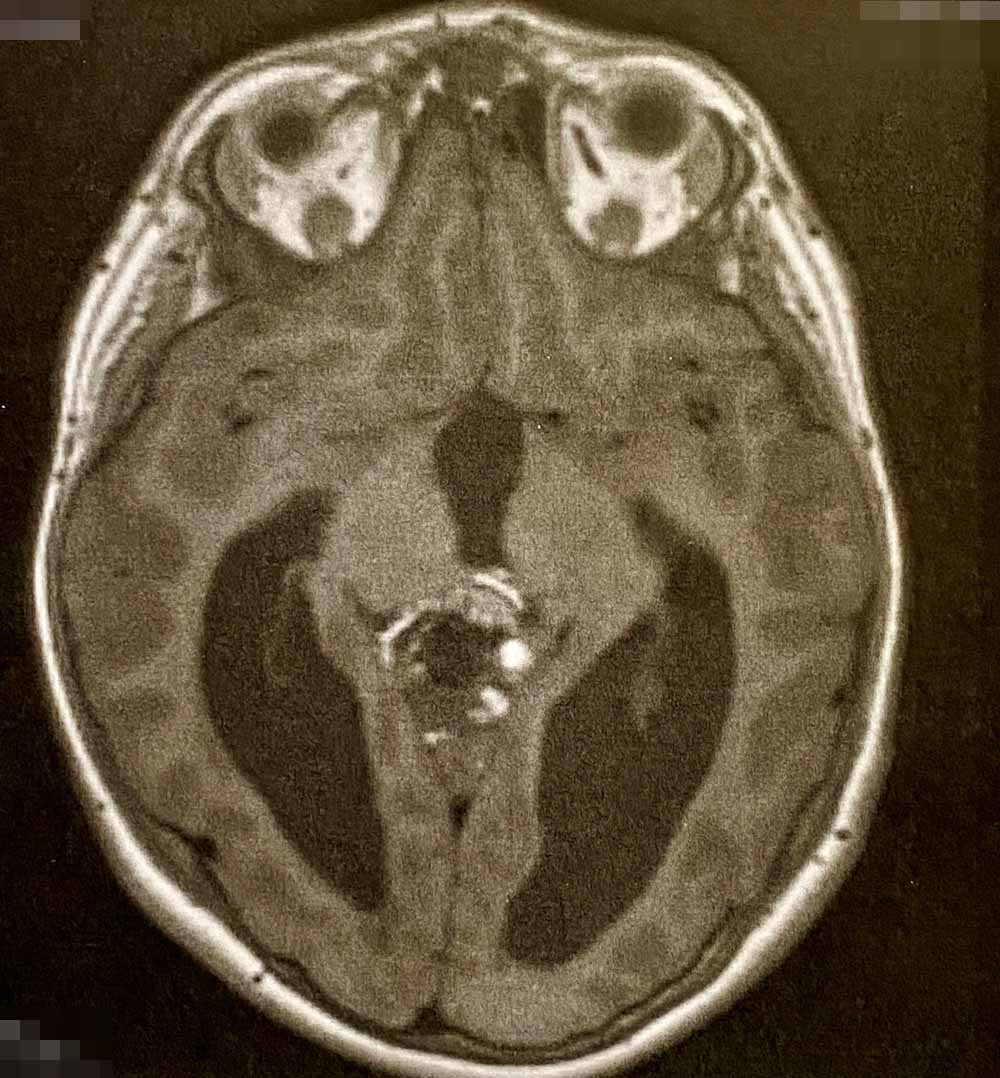 A CT scan at the hospital revealed a large lump “right in the centre of his brain,” after which he was blue-lighted to London’s more specialist King’s College Hospital.

“Daniel and I didn’t want to shut the ambulance door and drive off when we said goodbye to his dad and brother, as we were all crying so much,” Sophie said.

Daniel needed “groundbreaking” immediate surgery after an MRI scan revealed there was a build-up of fluid in his brain.

It took 12 hours in surgery for doctors to also remove enough of the tumour to sample for a biopsy, to reveal if it was cancerous.

Sadly, five days after the operation, his family were told he had a rare, large pineal germ cell brain tumour stuck around his brain stem.

These types of tumours, accounting for only one per cent of all brain tumours, are usually cancerous, as was the case for Daniel.

They are more common in children and young people than adults.

Chemotherapy – which made Daniel “extremely ill” – did not shrink the tumour like doctors had hoped.

On April 29, Daniel was admitted to King’s for a 10-hour operation to remove it.

“We were devastated,” said Sophie. “We’ve been very honest with him, but I couldn’t tell Daniel that all that pain and suffering was for nothing.”

He was 5ft 10in tall when he went into hospital and will be at least 5ft 11in when he leaves – as he’s been in there for so long.

Surgeons discovering that the 4.5cm by 2cm tumour had “calcified like bone” and infiltrated his brain stem, making it one of the most complex cases in the chief medic’s 30-year career, according to Sophie.

She said: “What hadn’t shown up on the MRI was that it was like tree branches. It was jagged and caused trauma when they took it out.

“They nearly didn’t operate but decided they would have to, to try and save Daniel’s life.

“Two world-renowned surgeons had to carefully peel it away from his brain stem to take it out whole. We had sleepless nights worrying about how much of Daniel we would get back afterwards.”

The poor boy even suffered seizures on the operating table and he had uncontrolled and painful muscular spasms while in intensive care.

“It was the most awful thing that any parent could ever witness,” Sophie said.

After another emergency six-hour operation on May 11, Daniel's muscle spasms became so bad that doctors placed him in an induced coma, to improve his chances of recovery.

Helpless Sophie said: “I felt really impotent. At one point during this nightmare, he developed sepsis – a potentially deadly reaction to infection – and he had a chest infection.” 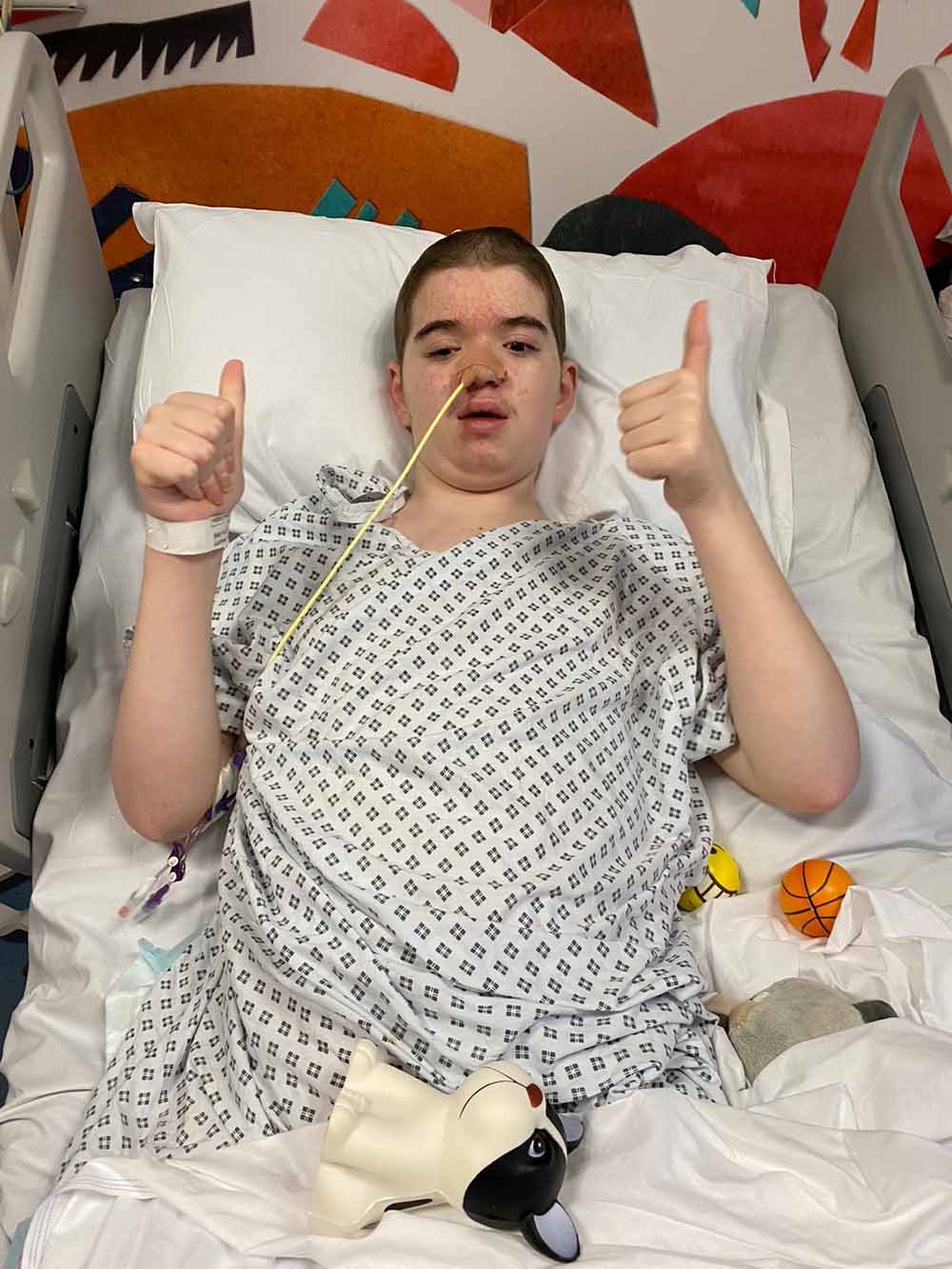 After Daniel was brought out of his coma at the beginning of June, more bad news followed when the family were told that his cancer had spread to the base of his spine.

Fortunately, Daniel was eligible for pioneering proton beam therapy – a course of radiotherapy that does not kill the surrounding cells.

He will begin a six week treatment course when he has fully recovered from brain surgery later this year.

Sophie said: “The news about his cancer spreading came right when everybody had started to breathe a sigh of relief – as he was moved to rehab.

“He is exceedingly lucky to get this through the NHS, as there are really tight criteria. Daniel is on a ‘cure pathway’ so we fully expect him to recover, but it will be a long one.

“It is his birthday on September 13 and he is desperate to be home by then. He was 5ft 10in tall when he went into hospital and will be at least 5ft 11in when he leaves – as he’s been in there for so long.”

The family are now using GoFundMe to raise money to adapt their house, so Daniel can, hopefully, continue his recovery at home.

And Sophie, who is writing a blog about his progress, said: “His rehab is going to be such a long and difficult journey, but I want him here to do it with me at home.

"To sleep in his own bed and cuddle up with his dogs, cockapoos Bella, six, and Angel, two, who miss him so much and probably think he’s never coming back.”