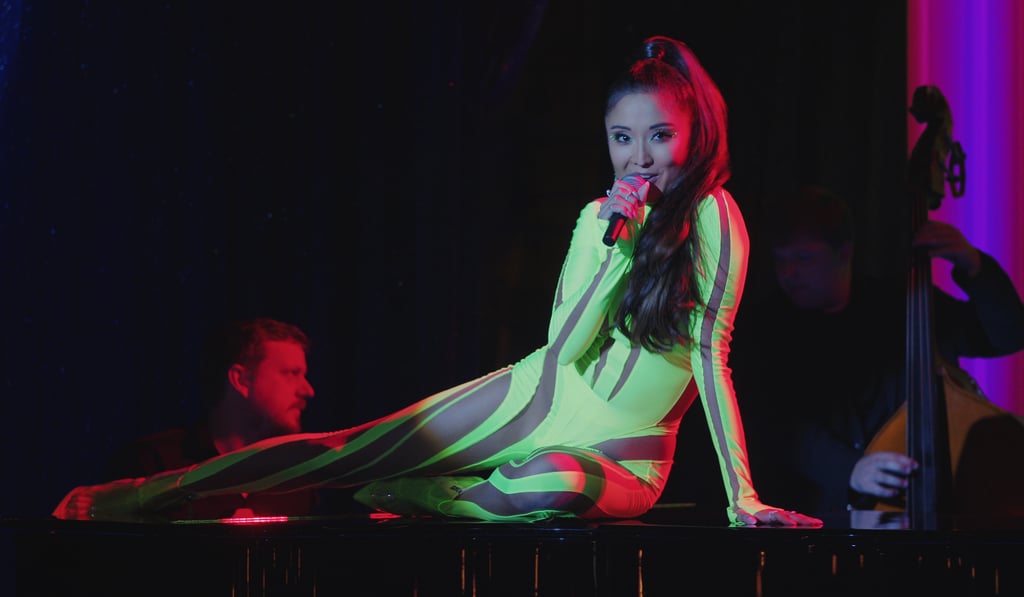 As POPSUGAR editors, we independently select and write about stuff we love and think you’ll like too. If you buy a product we have recommended, we may receive affiliate commission, which in turn supports our work.

Mindy Chen’s debut solo performance at La Trompette Bleue in “Emily in Paris” called for a standout fashion moment, and costume designer Marylin Fitoussi certainly delivered. In the third episode of the Netflix show’s drama-filled third season, Mindy (Ashley Park) hits the jazz club stage in a black floor-length robe, slowly crooning the opening lines of Dua Lipa’s “Don’t Start Now.” After finishing the first verse, she dramatically rips off the cloak, revealing a neon-yellow catsuit that epitomizes her star power and commands the audience’s full attention as she covers the catchy hit.

The contrasting components were intended to symbolize “yin and yang,” Fitoussi told POPSUGAR — Mindy starts out “a little bit shy” and covered up because it’s her first time singing alone at the nightclub, but then she sheds the drab outer layer to let her true colors shine.

If those sheer cutout-esque panels didn’t already tip you off, we can confirm that Mindy’s fluorescent catsuit — which is technically a long-sleeved bodysuit tucked into matching leggings — hails from Mugler. The risqué set has layered depth. Not only is it a purposeful homage to the many similar catsuits Lipa wore on her “Future Nostalgia” tour, but it also solidifies Mindy’s status as a true Parisian fashionista, seeing as Mugler is a renowned French label. Fitoussi also intended the look — and Mindy’s many other onstage costumes from season three — to be a subtle nod to the Lido cabaret, a famed music venue in Paris that recently closed, she told POPSUGAR.

Mindy styles her Mugler separates with transparent neon booties by Jessica Rich, dangly silver earrings, and embellished cat-eye makeup. The full look would cost upwards of $1,500, which is pretty steep given Mindy’s tight budget after cutting ties with her rich family. But given that so many other aspects of “Emily in Paris” are nowhere near realistic, we’ll let it slide in the name of fashion escapism.

Read ahead to admire Mindy’s show-stopping Mugler moment and to see Lipa rocking a similar illusion catsuit. In a “who wore it best?” competition, these two ladies would solidly tie.