EVER felt the need to check in on your cat or dog sitter while you're away? You might just want to after one mum's awkward experience.

TikTok user Meagan Herrick caught out her cat-sitter after her pet feline decided to gate crash her family camping holiday. 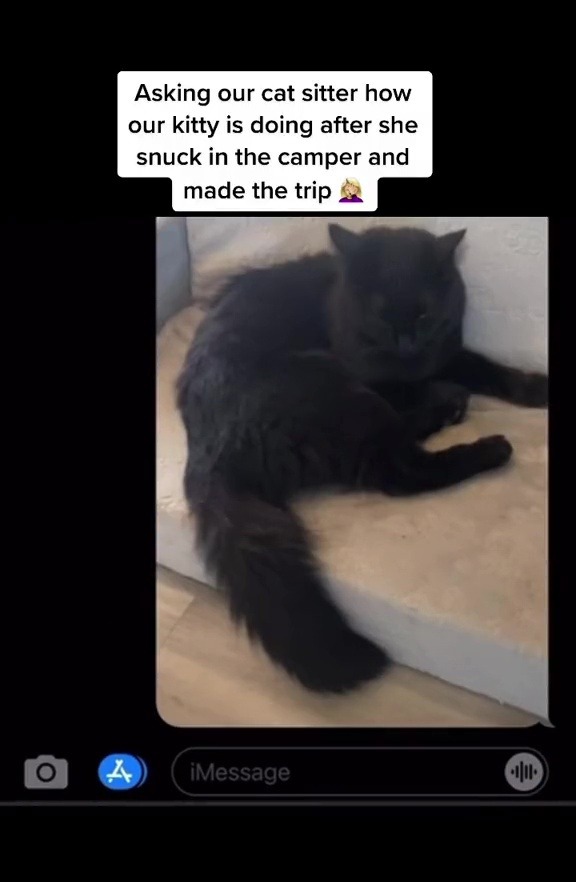 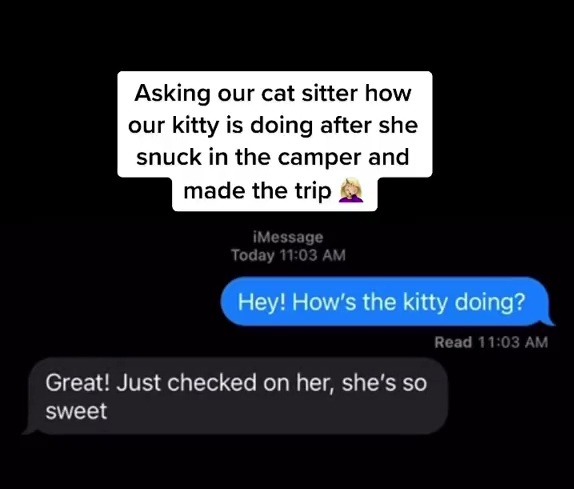 The mum revealed online that she hadn't realised her cat, Figgy, was hiding in the camper when they set off for their break away and soon found their pet after arriving at their camping spot.

Naturally, they had asked someone to check in on Figgy while they were away, but it made for one awkward text exchange when she decided to play dumb and check in on her cat-sitter.

Pretending she had no idea the cat was actually with her instead, Meagan messaged her cat-sitter after not hearing from them. She wrote: "Hey! How's the kitty doing?"

Little did they know they'd be instantly caught out, as they responded: "Great just checked on her, she's so sweet."

Meagan then snapped a picture of her cat kicking back in their camper van and replied: "She snuck in our camper."

Thousands of people were quick to comment on her video, with some joking they'd ditch the cat-sitter for a new one and others siding with the cat-sitter, who they presumed had been 'panicking' over thinking they'd lost Figgy.

"Umm… I would totally get a new cat sitter for sure tho (sic)," said one person.

Another wrote: "Cat sitter probably thought she let the cat out and didn't wanna tell you, she was probably frantically looking for that cat lol."

A third commented: "Poor cat sitter didn't wanna ruin your vacation while they're at your house panicking."

One more joked: "The cat sitter who was crying looking for the cat: PLEASE WHAT."

Naturally, people were keen for an update on the cat-saga, with Meagan sharing a second video as her text exchange with the cat-sitter continued.

She captioned it: "My cat-sitter is an A-hole! Or I am, not sure which one."

They'd told her: "Must have been your other cat," prompting Meagan to reply: "I don't have another cat!!"

Playing Meagan at her own game, the cat-sitter then sent a picture of a different cat inside and wrote: "Then who's cat is this?"

"That is not my cat!!!" Meagan responded.

Turns out her cat-sitter had seen her earlier TikToks of the cat inside her camper van and wanted to catch her out too.

They said: "Hahahaha I know. I saw your TikTok before you told me, I'm just messing with you." 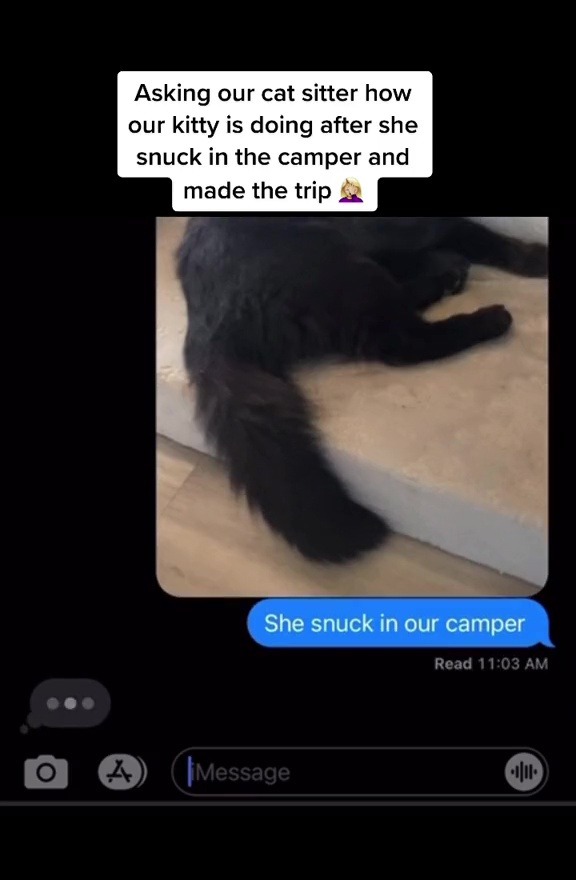 Plus, another mum was mortified as son detailed how his dad ‘saved her’ – after walking in on something he DEFINITELY shouldn’t have seen.

And a woman finds ‘proof’ boyfriend is cheating from innocent photo of his food – can YOU spot the clue that gave it away?