A WOMAN has showcased her dream house decor with pink walls, a glitter staircase and Disney artwork after giving it a girly makeover for just £125.

Mandy Ryder, 31, from Wigan in Greater Manchester gave the downstairs area of her house a glitzy makeover as the previous decor wasn’t to her taste. 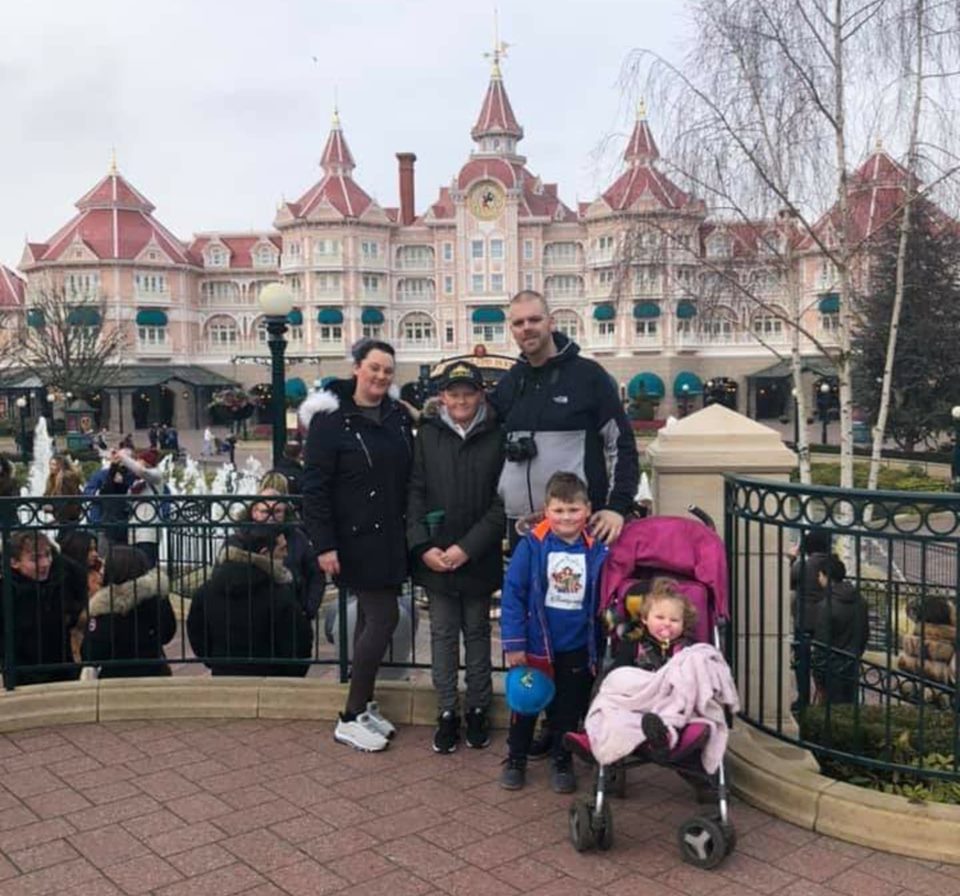 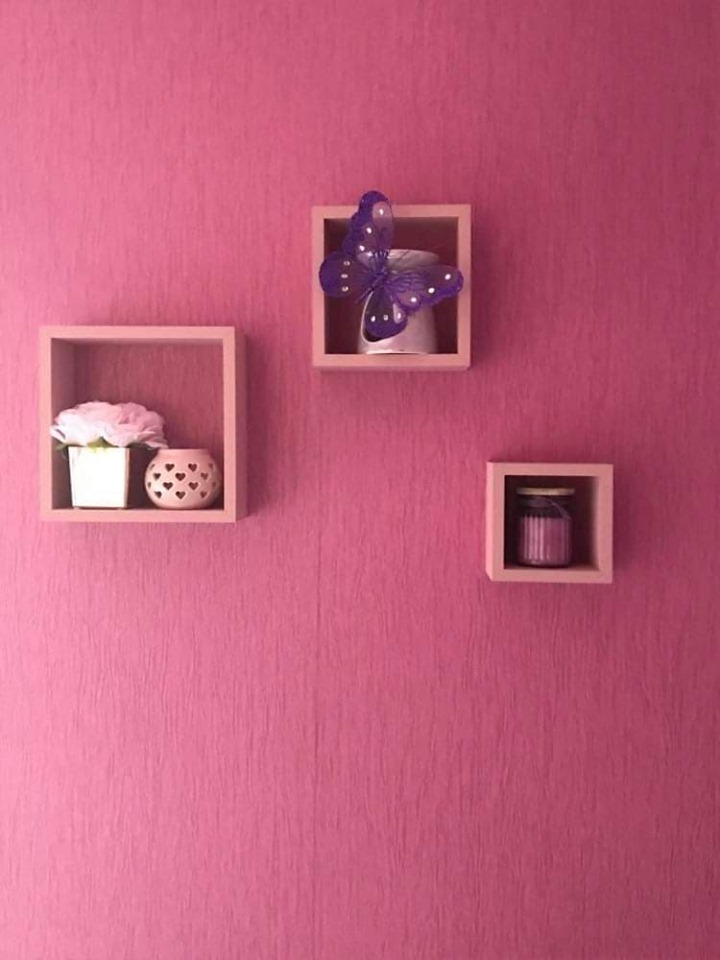 The full-time mother, who has lived in the house for three years, said the home was previously lived in by a 102-year-old lady – so the decor was dated and needed a revamp.

Mandy, who admitted she is Disney-obsessed, recently found the time to start the huge DIY project and has revealed her girly interior after ditching the striped blue wallpaper.

She shared her hallway and downstairs transformation on Facebook, writing: “Absolutely in love with my hallway.

“It’s not everyone's taste but most certainly is mine!” 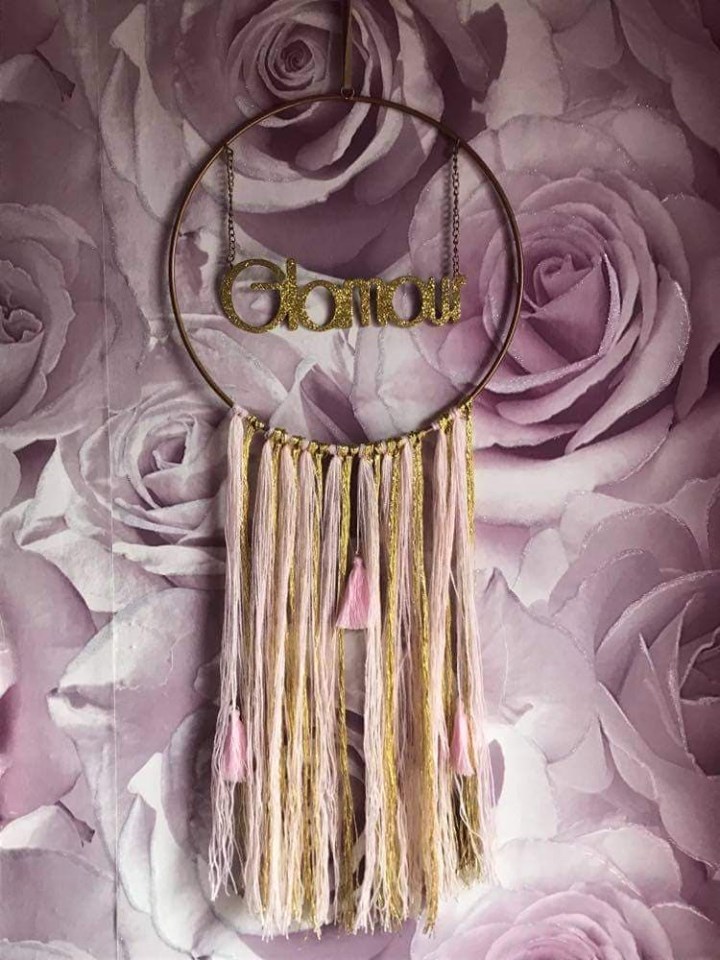 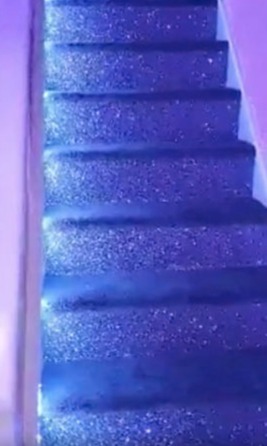 The post instantly raked up hundreds of likes and comments with users praising Mandy’s pink theme and creativity.

Mandy said she was pregnant when she moved into the home with her partner Matt Smith three years ago – and they didn’t have time to decorate.

She then struggled to find time in between looking after her three children to get started on the project so the walls remained in floral wallpaper and a striped design.

She said: “When we first moved in it was a bit of a rush as I was heavily pregnant so I didn’t have much time to decorate it the way I wanted it. 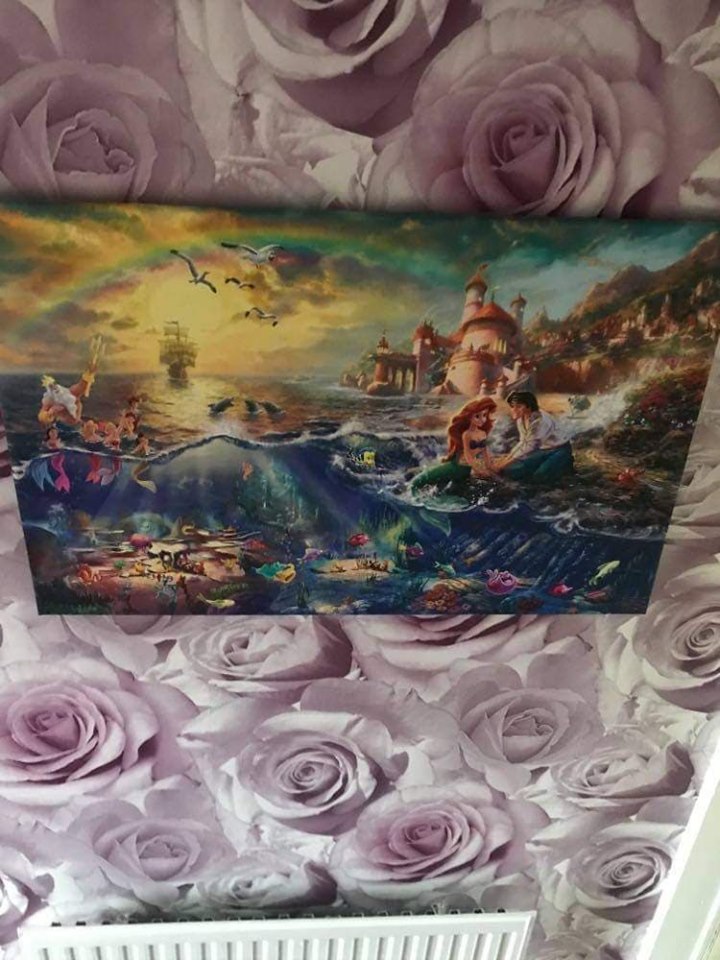 “It has always been something I knew I needed to do but never really found the time to sort it!

“The lady who lived in the house before us was 102-years-old, so you can imagine what the decor was like.

“Let’s just say, it wasn’t exactly to my taste!”

The mother, who said she is still a ‘little girl at heart’ dreamed of having a pink and purple theme running throughout the downstairs of her house.

She said she wanted to be greeted by the girly colours as soon as she opened her front door everyday.

Mandy even joked she would decorate the brickwork on the outside of her house with glitter if it was possible. 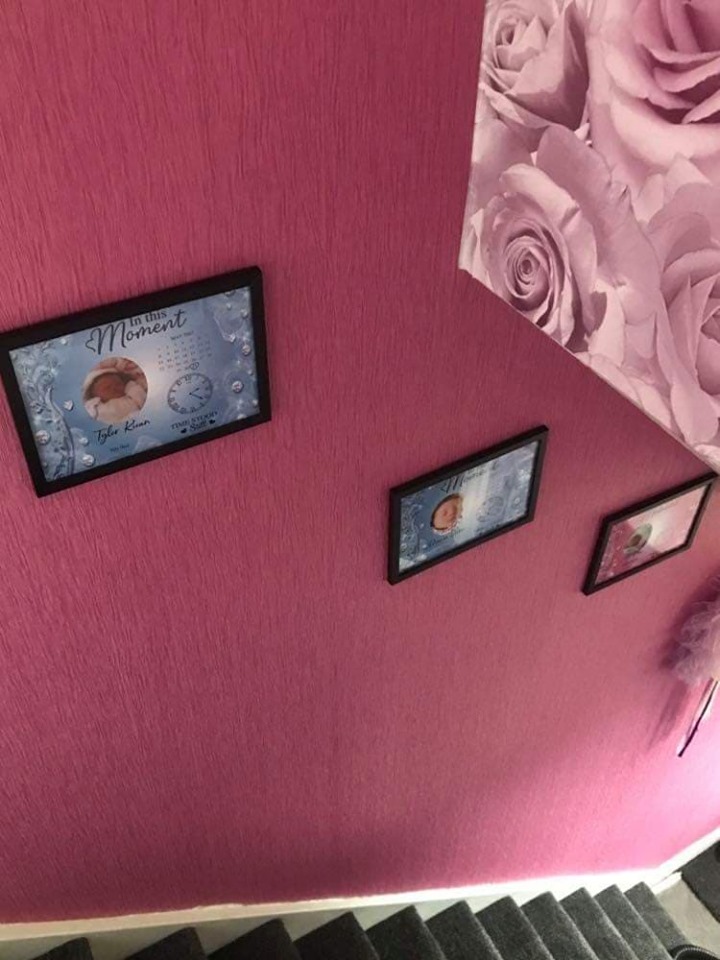 She said: "Although I am 31, I am still a little girl at heart and love anything Disney and sparkly.

“It is absolutely my dream home.

“If I had it my way, the brickwork outside would be made from glitter!”

Even Mandy’s partner Matt approves of their ‘pink and purple’ downstairs with the dazzling glitter staircase which lights up.

He commented: “It's very pink!

“But I am just glad Mandy loves it. She does a lot for me and the kids and she deserves to have a nice home.”

To start the hallway project – Mandy stripped the old wallpaper off all the walls and spent time reglossing the woodwork. 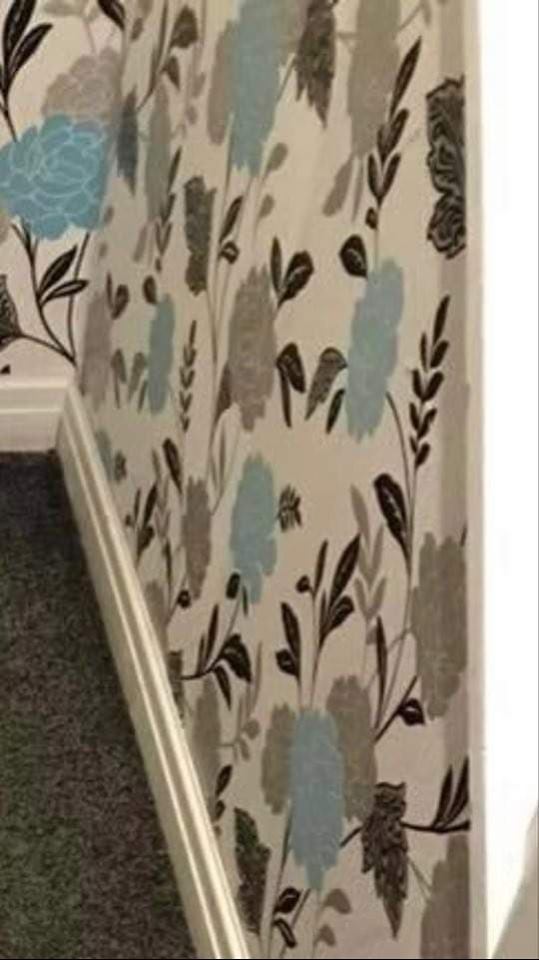 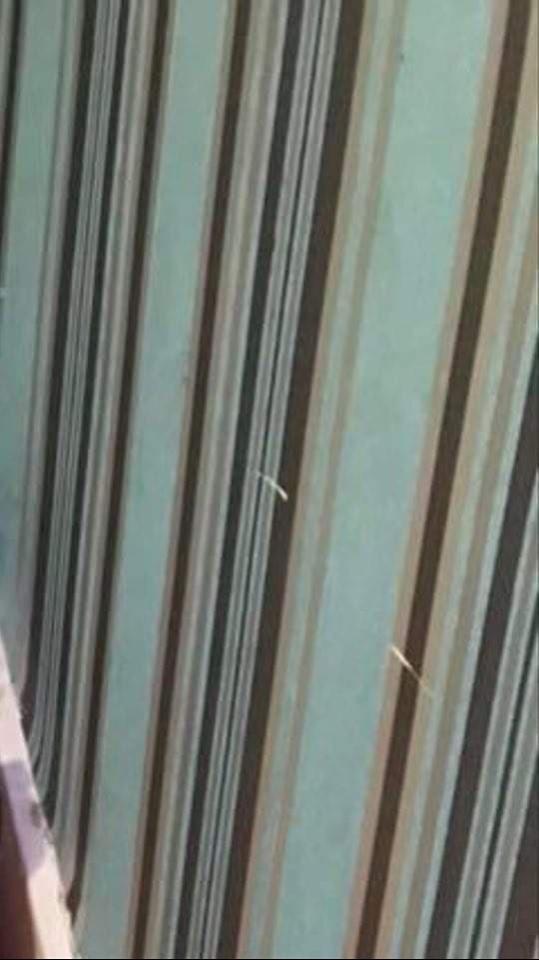 She wanted to create a blank canvas to work with so that she could start the transformation from scratch.

The makeover was done on a budget and only cost Mandy just £122.

She picked up bargain wallpaper from eBay for £9, two tins of gloss from B&M for £4 each and grabbed laminate for the stair risers from Facebook Marketplace for £5.

Mandy added: “Next I chose my colour theme – pink and purple – and started shopping around for wallpaper.

“I chose to put glitter on the stair risers to give it the added sparkly effect.

“I then shopped around for different accessories that I liked and dotted them around the walls.

“I also asked my mother-in-law to make me a purple wreath for the wall as this would be unique and nobody else would have one like it!” 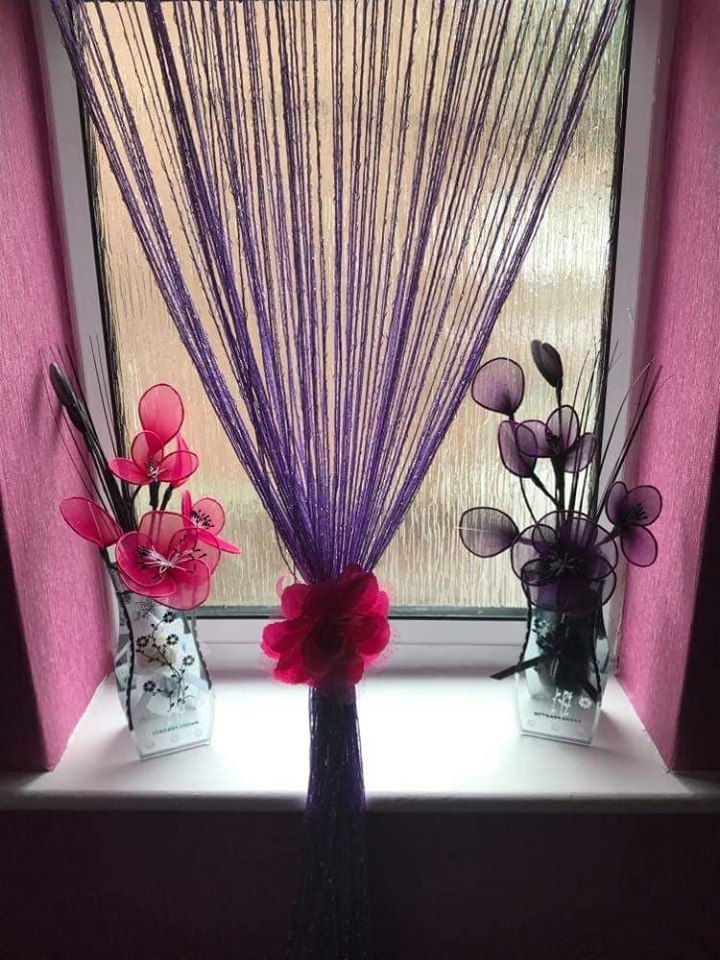 Mandy also purchased £45 glitter vinyl from eBay, LED strip lights for the stairs from B&M for £19.99 and her mother-in-law made the stunning wreath free-of-charge.

The mother said she only spent £35 on accessories for the hallway and downstairs altogether – grabbing frames, tassel curtains and dreamcatchers from B&M.

She admitted that she is thrilled to finally have her dream home coming together.

She added: “The hardest part about the whole process has to be the stripping and wallpapering everything. 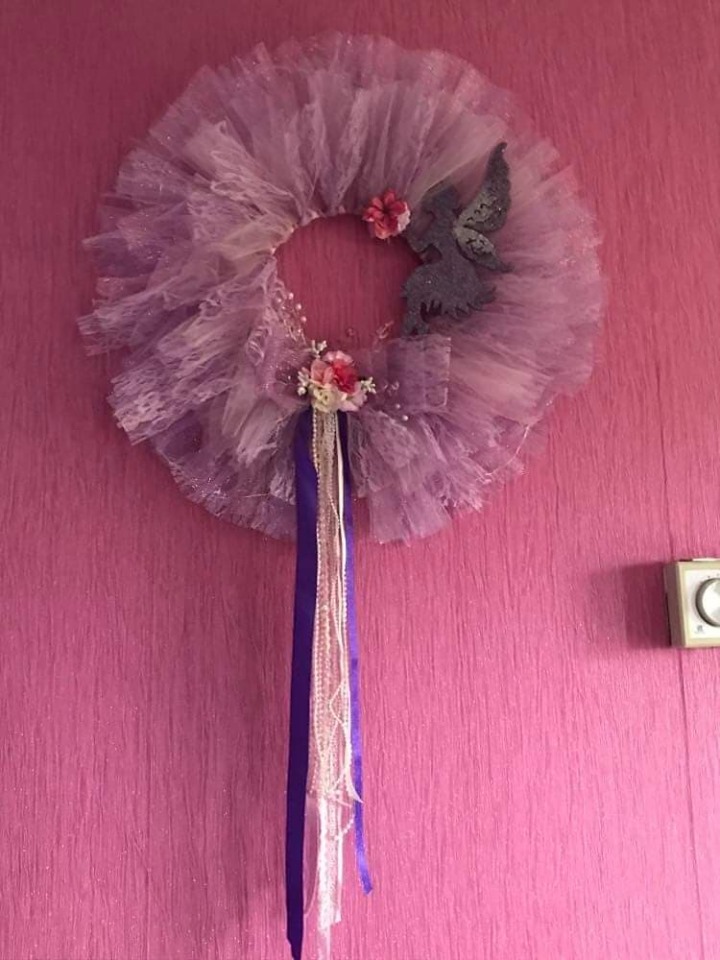 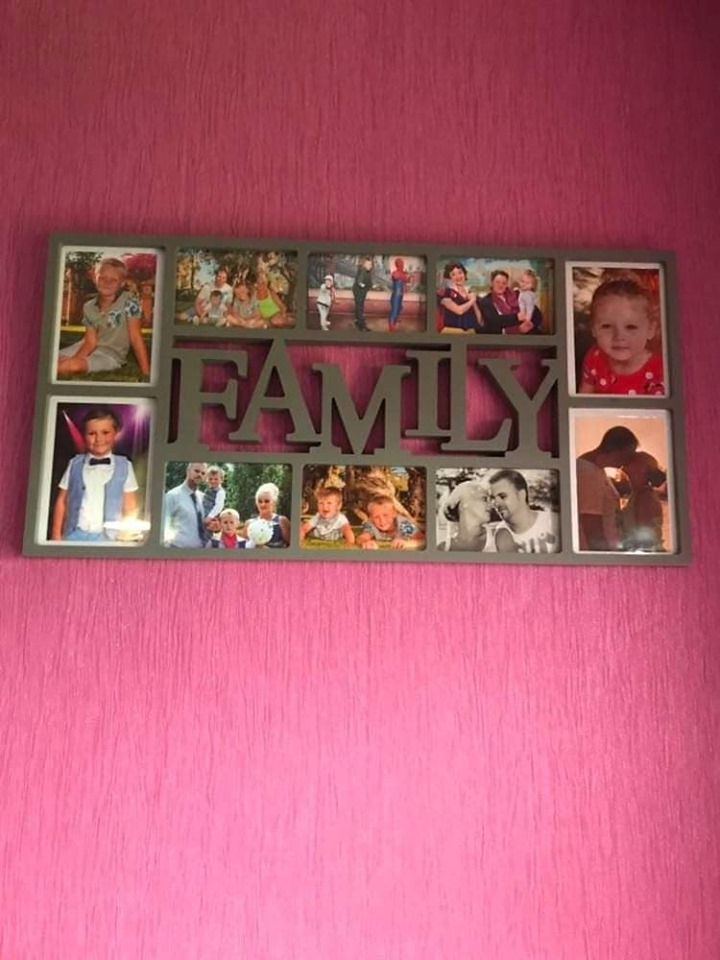 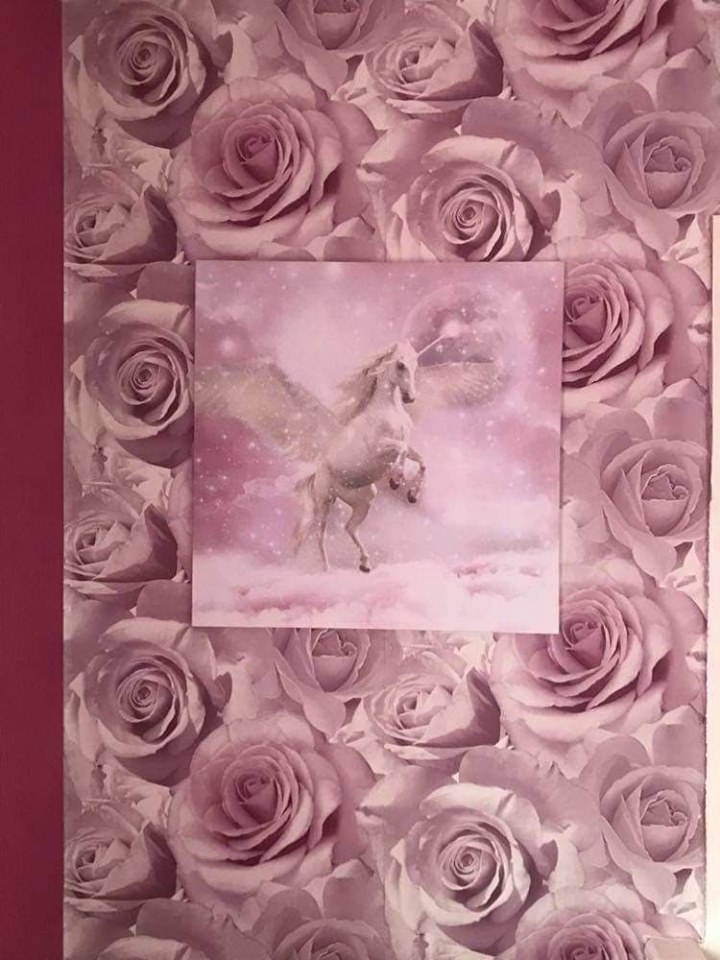 “As the wallpaper is matching, it was very frustrating, but I knew it had to be done if I wanted to achieve my dream home.

“I never thought that I would be able to achieve what I had in my head, but I have done it! I am absolutely in love!”

Mandy said she has also saved hundreds of pounds by doing the DIY project herself – with the help of her partner Matt.

She said the glitter staircase would have cost her over £400 to have it decorated in the way that she wanted so was happy that Matt offered to help.

She already had carpet but purchased the glitter felt from eBay and stuck it to the wooden floor with spray glue. 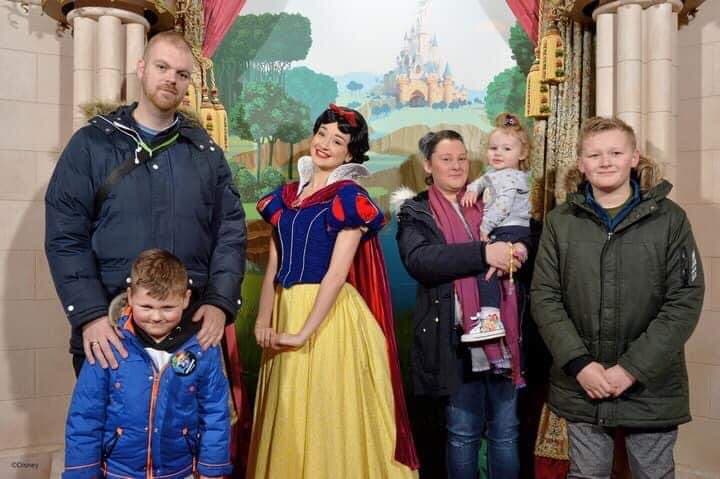 The mother said: “The stairs alone would have cost me over £400 so I roped my boyfriend into doing it for me and I am overwhelmed with the outcome.

“He has done an amazing job!

“I know not everyone is going to like it; I have a very unique taste. But nobody else has to like it. It’s my home and I love it.”

Mandy has girly decor in the other rooms in her house too – she has a grey, black and white living room with PVA silver glitter walls.

She also has glittering lights, a large mirror and a shiny white kitchen.

The mum has also decorated her hallway with an array of Disney artwork – including a colourful canvas of Little Mermaid and a pink-themed unicorn print up the stairs.

She said: “It’s not everyone’s cup of tea but I am a big Disney fan and Little Mermaid is my favourite so when I saw the canvas I just had to have it!

“All in all, the hallway has probably taken longer than it should have to get it finished due to other commitments.

“But the way I look at it is that it hasn’t been rushed and I appreciate it more due to the time and effort that has gone into it.”

One wrote: “Oh I like it. Lovely house Mandy, it looks magical!”

While another replied: “Wow so bright and sparkly!”

Meanwhile a third commented: “It’s stunning – I love it!”

In other DIY news, this mum and daughter who were quoted £1000 for their bathroom do it themselves for £100.

Meanwhile this mum who couldn’t afford a new sofa turns her drab brown couch into a chic navy one by PAINTING it & it only cost £30.

Plus a mum who couldn’t afford new tiles gives hers a makeover with cake decorating syringe & people say her floor looks new.