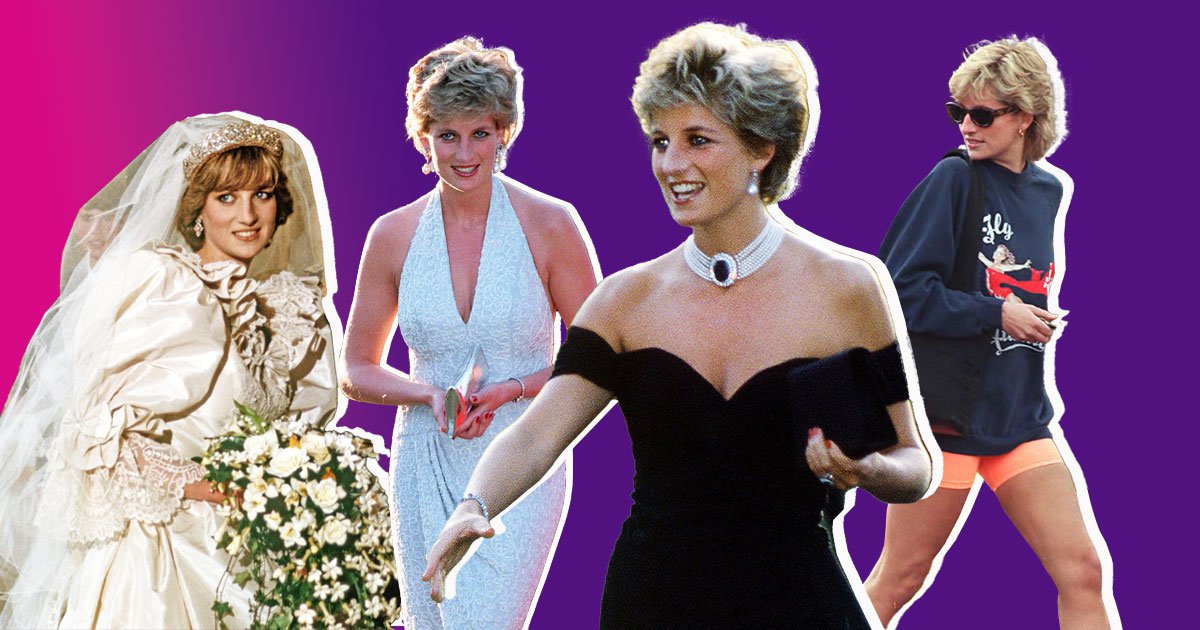 Season five of The Crown is about to drop on Netflix, giving us a royal hit of drama that show bosses have had to stress is ‘clearly fictional.’

While we know the series isn’t a fly-on-the-wall documentary, it’s easy to be swept up by spot-on casting and set design that takes you back to those moments in time.

This season, for example, sees Elizabeth Debicki make her debut as Princess Diana, and from her costumes down to her knowing looks she’s a real dead ringer for the monarch.

Diana was known for her style, with her timeless (and sometimes daring) outfits remaining part of the fashion conversation decades after her passing.

This meant there was a lot of pressure on Australian actress to get the monarch’s looks right – including the iconic ‘revenge dress’.

Speaking to Vogue, Elizabeth said: ‘When people in my life found out that I was going to play this part, this was the dress that everyone texted me about. That’s when I started to realise how symbolic this dress is to people.’

As the ‘People’s Princess’, Diana holds a special place in many people’s hearts due to her warmth and sense of humour with the public. This sense of familiarity was bolstered by regular pictures of Diana sporting an off-duty aesthetic unlike we’d seen from mainstream royals before.

Many felt that they watched her grow up from a shy young woman to a proud mother and outspoken advocate in her own right, which can also be seen in Diana’s wardrobe.

Over the years, King Charles’ former wife graduated from fussy frills and pussy bows to more sophisticated silhouettes. Diana’s departure from the marriage marked a style evolution, seeing her coming into her own and forging signature looks that she appeared comfortable and confident in.

In the decades prior to Diana’s untimely death in August 1997 aged 36, she had been considered a fashion pioneer and a darling of the industry. Though she was remembered for her extensive humanitarian work around the world, this will also be part of her legacy.

So before you see them recreated on The Crown, these are Princess Diana’s best looks from her years in the public eye.

The first time Diana met the press was the official announcement of her engagement to Prince Charles on February 24, 1981.

The blue suit was revealed to be by Cojana, and the story goes that she purchased it off-the-rack in Harrods after being told by a sales assistant to try a more budget-friendly store (a real Pretty Woman moment).

It also matched Diana’s sapphire engagement ring – the one given to Kate by William years later – perfectly.

As Lady Spencer, Diana didn’t get have to dress for royal convention just yet.

These lemon dungarees, worn to a polo match in 1981, are playful and sweet – especially paired with a floral blouse, red wedges and huge sunglasses.

Probably the most memorable of Diana’s pieces is her wedding dress, from the big day on July 29, 1981.

The voluminous gown was made by husband-and-wife team David and Elizabeth Emanuel, adorned with 10,000 pearls and valued at an estimated £100,000.

Newlyweds Charles and Diana posed for photographs by the River Dee in Balmoral in 1981, with Diana wearing a tweed suit by Bill Pashley and cream flats by a Chelsea cobbler.

While pregnant with Prince William, the monarch was pictured wearing a green smock dress and veiled hat at Buckingham Palace for Tropping the Colour in June 1982.

She paired the tonal outfit with a pearl choker given to her by her father on her 18th birthday.

Here’s the Princess of Wales wearing a floral Bellville Sassoon dress and matching pink hat for baby William’s christening, in the music room at Buckingham Palace later that year.

To a formal dinner at Saint John Convention Centre in New Brunswick, Canada, Diana debuted this stunning Bruce Oldfield gown, alongside the diamond Spencer tiara (a family heirloom) that she wore to her wedding.

As mentioned, Princess Diana was known for her casualwear as much as her black tie, which this trip to the Guards Polo Club in Windsor proves.

With white jeans and a bowed collar, she sported this fun ‘black sheep’ jumper by Muir and Osborne, which may have been a subtle signal of her feelings about entering into the monarchy.

While on an official visit to the US, Diana’s daytime look to meet Nancy and Ronald Reagan consisted of a scarlet pantsuit.

At night, however, she changed into a black, off-the-shoulder Victor Edelstein dress, which provided a satisfying spin during an impromptu dance with John Travolta.

For the Royal Family’s Easter Service in 1987, Diana and Prince William twinned in matching pale blue coats by Catherine Walker.

The brand remained a favourite of Diana’s throughout her life, and Kate Middleton is now a fan of the designer.

Among the most iconic images of the former Princess of Wales is this, showing her going for gold at her sons’ sports day in 1989.

At 29 years old, the royal threw off her shoes and went for gold in the mother’s race – despite the all-white ensemble being an easy target for grass stains.

Princess Diana wore what she referred to as the ‘Elvis dress’ during a visit to the Culture Centre in Hong Kong in 1989.

The column gown by Catherine Walker, made a few reappearances after this outing, where it was accessorised with a matching bolero jacket and pearl jewellery to compliment its embellishment.

Ever one to subvert expectations, Diana attended a dinner for the Royal Hampshire Regiment in Winchester in a masculine mess jacket from Gieves and Hawkes.

While taking sons Harry and William on their first skiing holiday to Lech, Austria, the Princess’ colourful all-in-ones made a big statement against the region’s snow-capped mountains – this red number included.

Known as the ‘revenge dress’ this Christina Stambolian piece has gone down in history as one of Princess Diana’s most iconic.

According to her stylist Anna Harvey, the £900 LBD had been made for Diana years earlier, but she’d thought it ‘too daring’ at the time.

Saying she wanted to feel like ‘a million dollars’ at the Vanity Fair party at the Serpentine (shortly after her separation from Charles and the same night as the release of a tell-all documentary about the couple), she chose this last minute… and what a choice it was.

Gowns and sequins aside, some of the outfits we love most from Diana include her post-gym ones.

She was known to pair an oversized sweatshirt with neon cycling shorts, chunky trainers and sports socks; a look that’s still emulated today.

In 1995, Diana took part in an interview with Martin Bashir where she told her side of the story about separating from Prince Charles.

Over a third of the country were said to have watched the tell-all film, in which she famously said ‘there were three of us in this marriage’ in reference to Camilla Parker Bowles.

She went for a demure midnight blue suit to set the mood for the interview, crafted from pure cashmere by Savile Rowe tailor Andrew Ramroop.

As Diana’s humanitarian work made up a big part of her public persona, many picture her in comfortable clothes like these.

After divorcing from Charles, Diana’s style seemed more grown-up, as she was no longer bound by royal rules when dressing up.

At the Christie’s AIDS Crisis Trust and the Royal Marsden Hospital Cancer Fund event in London in June 1997, she wore this cocktail dress by favoured designer Catherine Walker.

Continuing on the theme, the mum-of-two wore another pale blue cocktail dress, this time to a Swan Lake performance in London.

The Jacques Azagury sequin frock was paired with tonal slingbacks and a metallic clutch.

Diana’s love for the cocktail dress didn’t stop, and she wore this Catherine Walker piece to an auction of her dresses at Christie’s in New York.