Have Meghan and Harry been unveiled as Ralph Lauren’s latest campaign stars? Are the Sussexes about to announce a new partnership with Gap? No (well, not that we know of), but the heavy denim theme of their 2021 Christmas card, released on Thursday, could easily be an advertising image for either of those all-American labels.

Sat on the steps of their Montecito home, Harry, Meghan, Archie and Lilibet look like the epitome of wholesome American glamour. The photograph, lensed by their wedding photographer Alexi Lubomirski, could have been taken at any point in the past 40 years.

What’s especially clever about the styling here is that it’s very difficult to tell whether Harry, Meghan and Archie are in bargain Gap jeans or ultra-luxe designer styles costing hundreds of dollars. They look expensive, but that’s down to the glossy grooming and good lighting, rather than anything obvious in their clothes. Although there is a Succession-esque stealth wealth refusal to brandish a logo at play here, underscored by Archie and his father’s casually undone shirts (note, too, the rip in the Harry’s jeans) and Meghan’s polished navy cashmere rollneck.

The only family member not in denim is Lilibet whose frilly white cotton dress and bloomers is at once charmingly simple and a reminder of the kinds of clothes her namesake, the Queen, was dressed in as a baby of the 1930s – in that sense, she ties in with the rest of her family by working a timeless trend.

This is an image to add the great canon of aspirational denim photography which has permeated fashion culture for decades. It makes me think of a fresh-faced Brooke Shields in her Calvin Klein and Guess jeans in the ’80s, of Anna Wintour’s first American Vogue cover in 1988 when Michaela Bercu was captured in a couture corset and jeans by Peter Lindbergh, her face and hair looking natural and radiant in a way a magazine cover girl’s rarely had before and of Harry’s mother Princess Diana, striding across a polo lawn, down school steps or into a war torn Bosnian village wearing her own beloved Levi’s in decidedly “un-royal” moments.

The plethora of denim on show here is no mistake for the Sussexes. It oozes California ease and rejects royal grandeur. It’s a picture which says “we’re American now” and “we’re relaxed and happy here”. 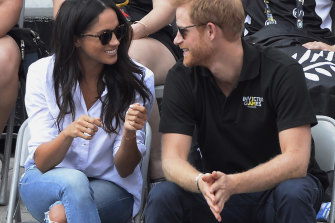 Meghan sporting ripped jeans and a white shirt at the Invictus Games in 2017.Credit:The Canadian Press/AP

It’s also a follow on from other key denim moments from the Sussexes who have long used jeans to semaphore their down-to-earth style.

For her first official appearance as Harry’s girlfriend in 2017, Meghan teamed a white Misha Nonoo “Husband” shirt with ripped, frayed Mother Denim jeans. For the final engagement of a high fashion energy tour of Australia, New Zealand, Tonga and Fiji in 2018, the Duchess dialled her look down in black skinny jeans and a puffer jacket. In 2019, she famously caused a minor storm by wearing jeans to Wimbledon and in 2020, the couple both chose denim when they marked the anniversary of Princess Diana’s death by helping out at a Los Angeles pre-school. 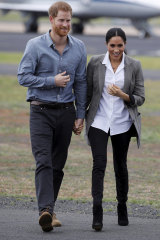 Harry and Meghan wearing jeans is they arrive in Dubbo, Australia, in 2018.Credit:AP

The photograph shows an acute awareness of family branding, something they’ve always been excellent at but really emphasise here. As my colleague who hails from the US points out, “Americans love to take a family photo on the beach in July in denim and matching tops, then save the photo for Christmas”. There will be a million slightly less elevated versions of this image in living rooms and inboxes across the world this festive season. You can imagine the Sussexes recreating it for years to come as a chart of their growing family’s evolution.

The picture will also be a boost for the denim industry which is projected to be worth $US26 billion by 2026. Jeans have suffered in recent years as many of us have swapped the ignominy of suddenly being unable to fit into our favourite skinnies and the awkward faff of pulling them on in the morning for the comfort and ease of leggings or tracksuit bottoms. Meghan and Harry looking laidback, happy and classically casual is sure to send sales rising again.

Who knows what the next year will bring for Meghan and Harry, but if they’re looking to expand their portfolio of business partnerships with something in the fashion space, then this effortlessly glossy advert for dreamy denim California living is the perfect audition piece.