Debbie Turner shows off her Sound of Music masks

The Sound of Music is a musical hit which has remained a family favourite since it was released more than 50 years ago. Speaking on This Morning today, Debbie Turner made a nod to an iconic scene in the 1965 classic.

The Rodgers and Hammerstein favourite tells the story of a nun who looks after the seven children of a widowed naval captain.

Debbie Turner played one of his seven children, Marta von Trapp, when she was just eight-years-old.

Today, she appeared on This Morning via video link and gave a glimpse into her home. 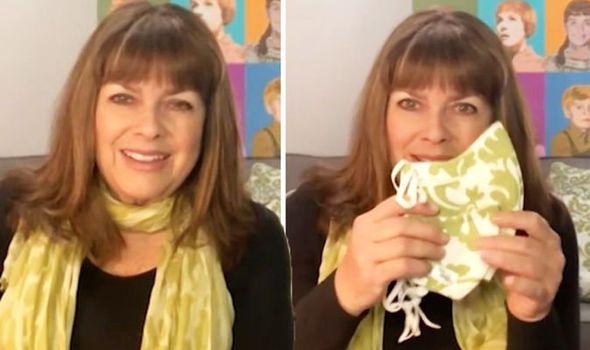 Presenter Holly Willoughby was quick to spot a couple of personal items in the room which made reference to the movie.

Holly said: “I’m slightly mesmerised by what is going on behind you because I’ve spotted the cushions already.

“Is that the same fabric as the dresses that were made from the curtains in the movie?”

The ITV host referenced a scene in the musical where the character Maria makes matching outfits for the family using old curtains.

Debbie replied: “It is. I don’t know if it’s exactly the same but it’s similar.”

The actor goes on to confirm she has used the designs to create a business following her role in the film.

She was asked about her business by Phillip Schofield and continued to show some of her creations.

Debbie held up a selection of face masks which were also made from the same material as the cushions.

The Sound of Music

The face coverings were cream and covered with a lime green floral pattern – just like the outfits in the musical.

The actor was also spotted wearing a chiffon scarf with a design matching the face masks and cushions.

A colourful illustration of The Sound of Music cast was also hanging on the wall behind her.

The child star opened up about what she has done since first appearing in the movie.

She said: “I didn’t do a whole lot after that. I think I just lived the life of a regular kid for the most part.”

Debbie made the television appearance just days after the death of her co-star Christopher Plummer was announced.

The much-loved actor passed away at the age of 91, a statement confirmed on Friday last week.

As well as starring in The Sound of Music, Christopher has roles in movies including The Girl with the Dragon Tattoo and Knives Out.