A BRIDE and groom are sharing photos of them wearing skinny jeans and t-shirts on their big day to prove weddings don't need to cost a fortune to be special.

Rebecca, 26, and Glen Maxwell, 30, wore jeans, personalised 'bride' and 'groom' t-shirts and trainers for both their ceremony and reception. 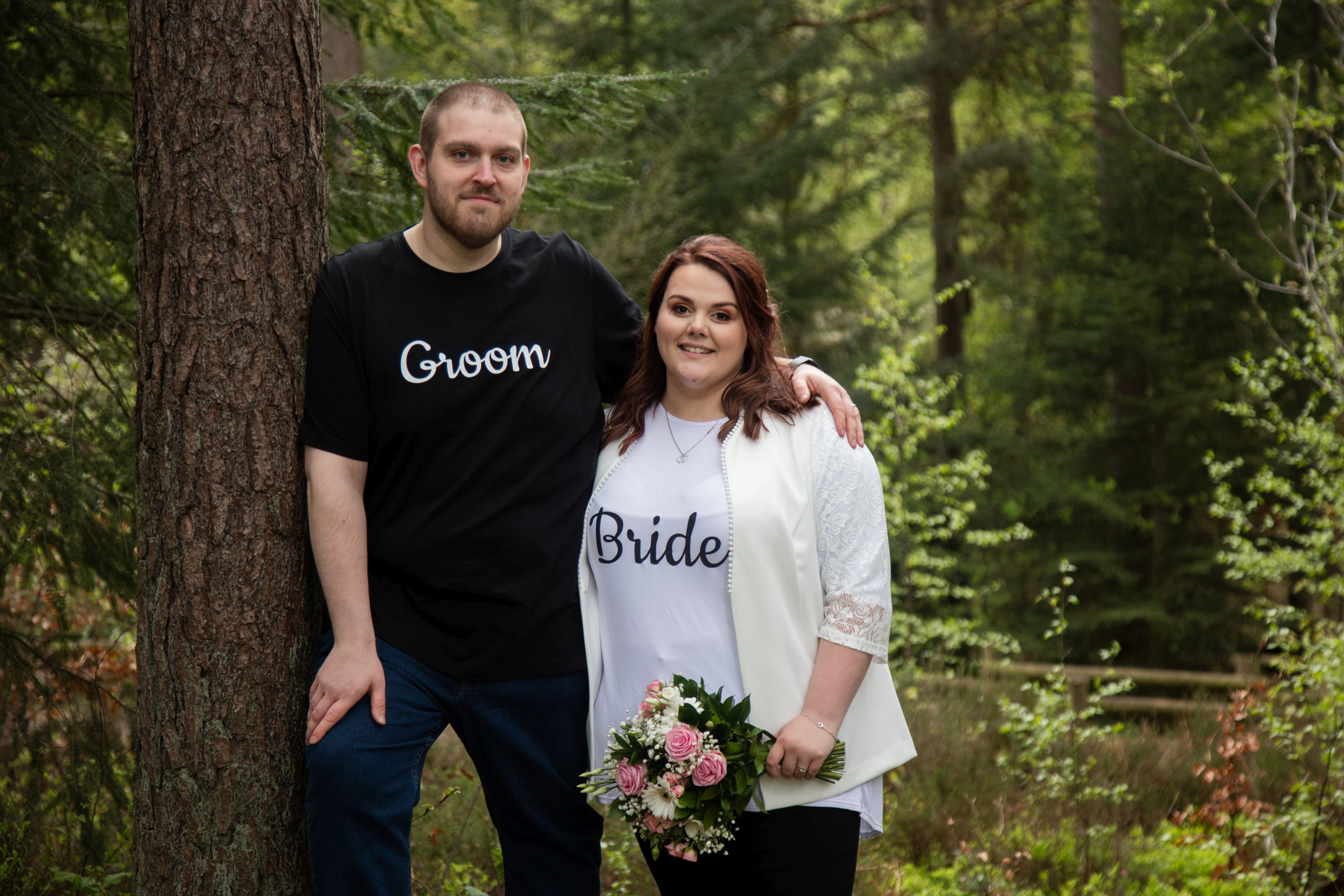 The newlyweds bought similar personalised tops for the bridal party, best man as well as their parents and asked their 40 guests to wear jeans and t-shirts too.

Parents to nine-month-old daughter Eleanor Maxwell, the couple got engaged in August 2016 and started planning a big white wedding.

But the more they planned the more GCSE and A-Level tutor Rebecca and partner Glen, who works in security, knew a 'fancy' wedding wasn't for them.

The mum and dad have never enjoyed lavish holidays or date nights but prefer casual days out, exploring or snuggling on the sofa and spending quality time together. 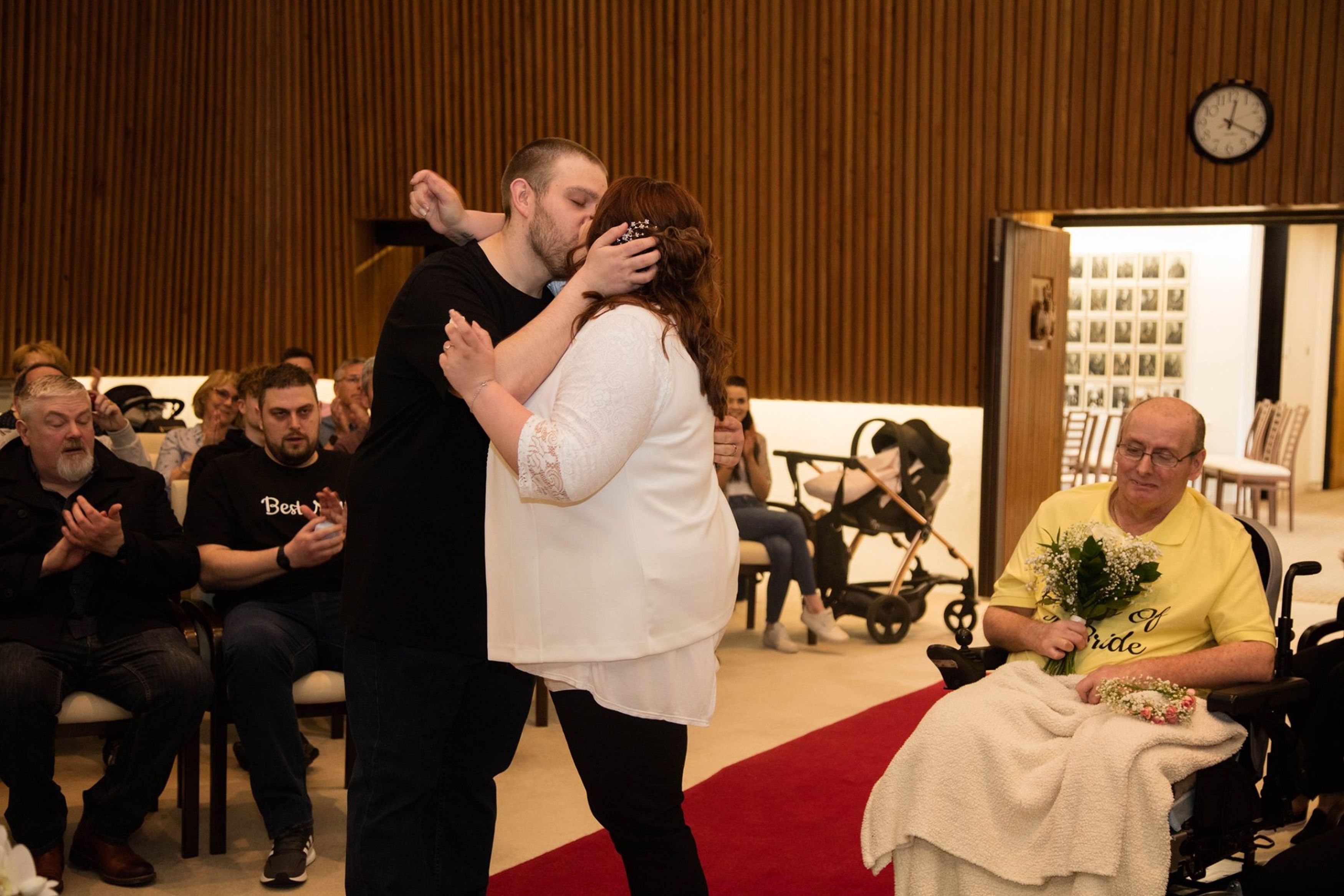 And after pricing everything up, Rebecca and Glen's excitement to get hitched became completely overshadowed by the stress of how they would afford it.

One evening while agonising over the plans and budget, Glen told Rebecca 'we could get married in jeans and t-shirts and I'd still love you' – and that set the ball rolling.

Instead of putting on an 'expensive show' for everyone, the bride and groom decided to be true to themselves and ditch all their extravagant plans for a more relaxed do. 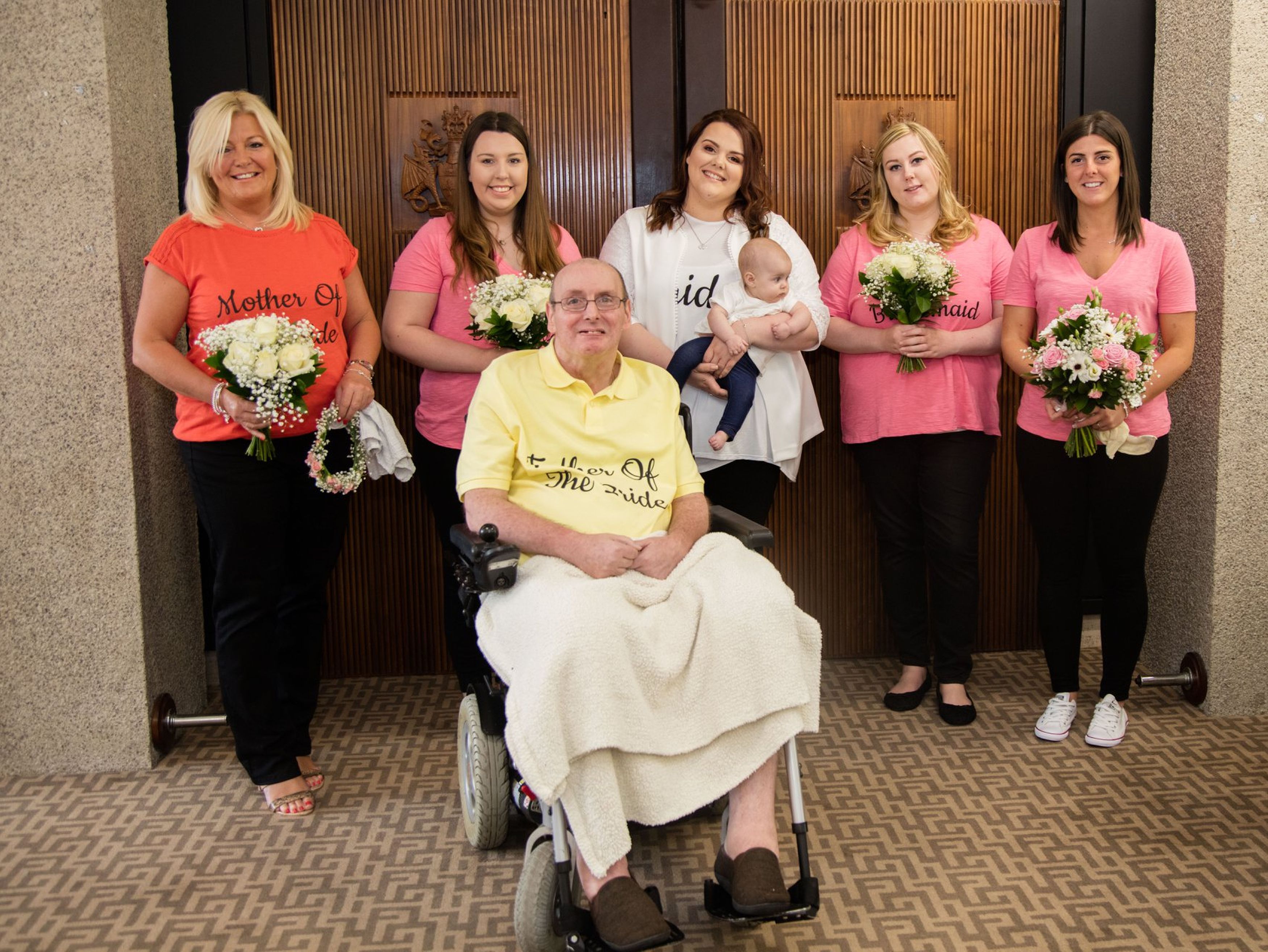 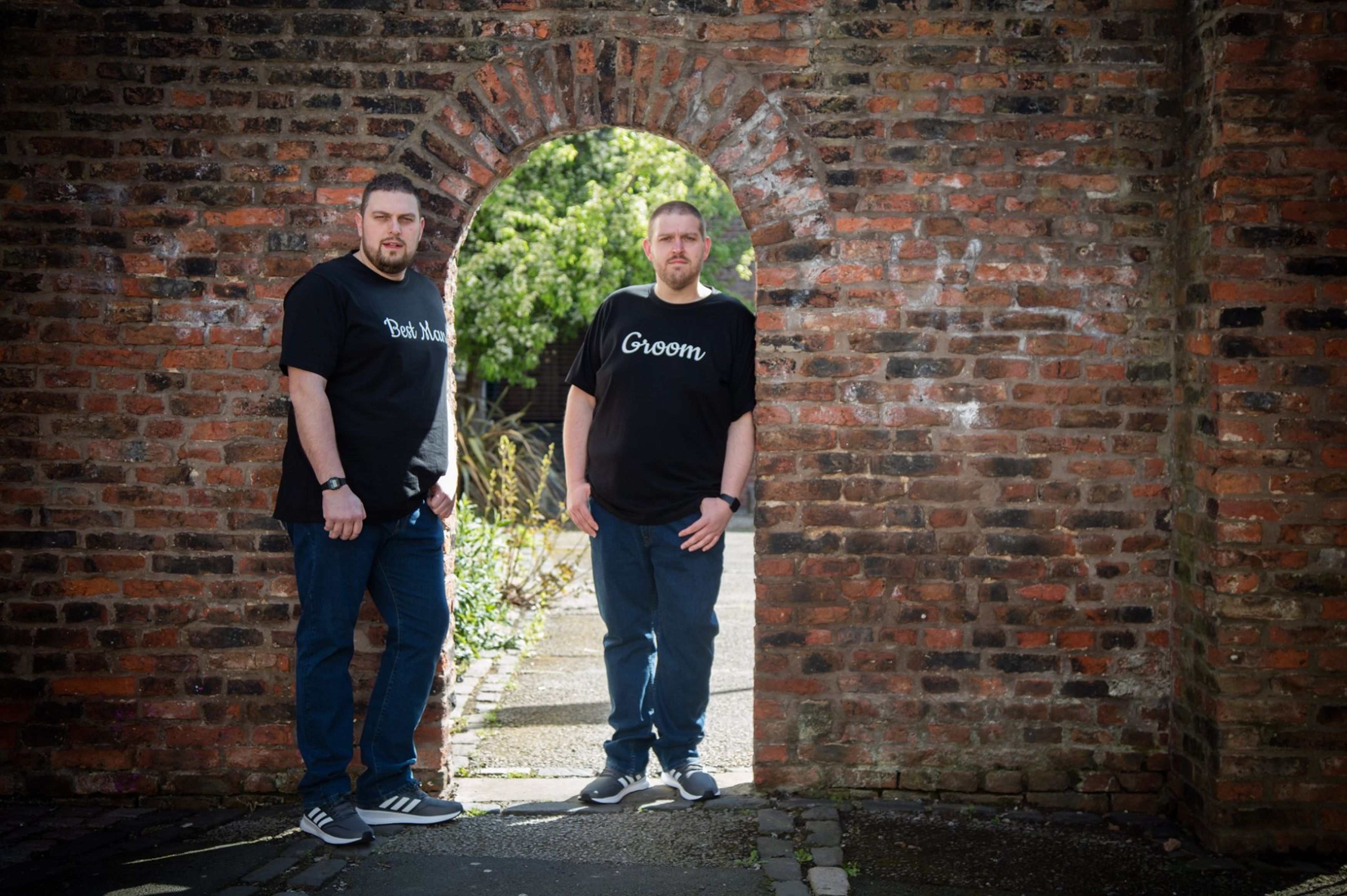 Now the lovebirds are sharing the snaps from their casual wedding to show other couples that their big day doesn't need to break the bank to be special.

Rebecca, of Blyth, Northumberland, said: "When we were planning our wedding, we started doing everything to please other people.

"Our guest list was getting out of hand. You feel like you have to invite people because you don't want to upset them rather than because you want them there.

"We had spent hours looking through Pinterest at all the dresses, cakes and decorations and you do get sucked in. 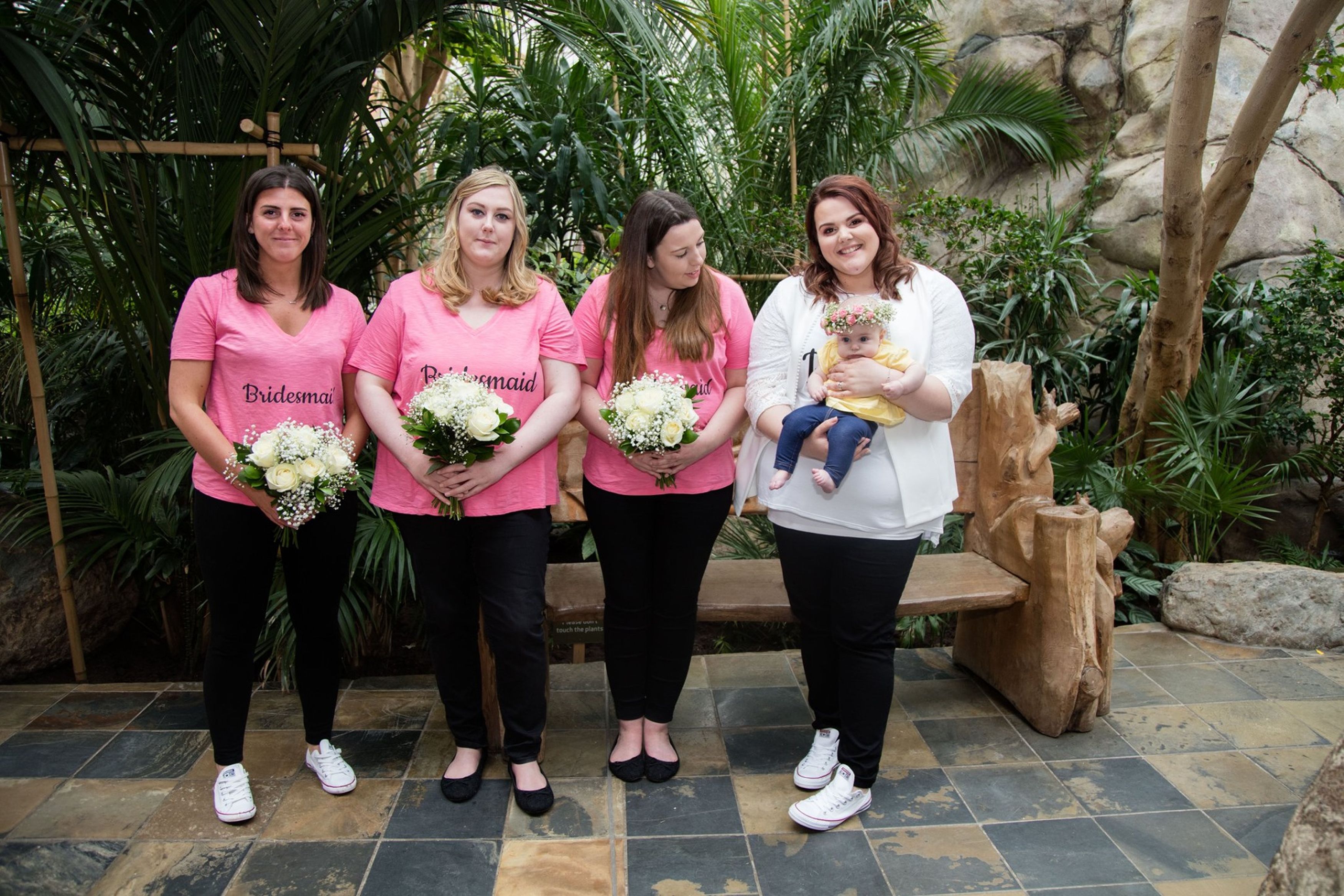 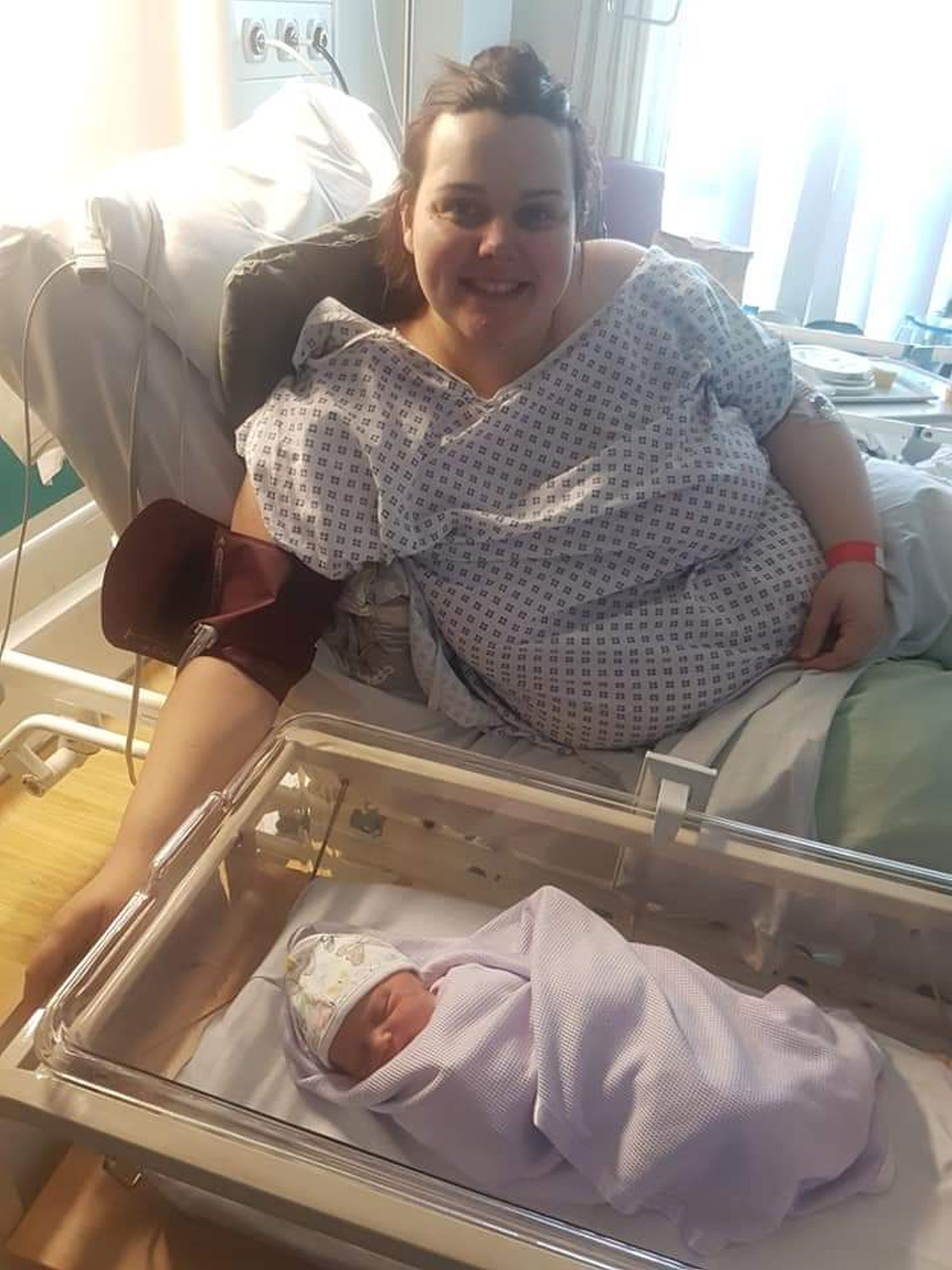 "But at the end of the day me and Glen just really weren't bothered about all of that.

"I had even bought a wedding dress but after having Eleanor I went to try it on again and I ended up crying. It just was not what I wanted at all.

"Glen made a flippant comment, saying 'we could get married in jeans and t-shirts and I'd still love you' and that was that.

"Me and my husband we just like simple things. We don't like big holidays and fancy nights out. We just love each other's company.

"What was special was that we were going to join together and I was going to have the same surname as my little girl.

I want to show other brides that if they don't have a big budget, it doesn't matter. They don't have to spend a fortune or put all that pressure on themselves

"A big dress or fancy day, that all paled into insignificance.

"I want to show other brides that if they don't have a big budget, it doesn't matter. They don't have to spend a fortune or put all that pressure on themselves.

"As long as you marry the person you love, surrounded by people you love, your day will be special.

"Me and my husband are still married just like all those people who are in £20,000 debt.

"I do really believe that so many people lose sight of the real reasons to get married. 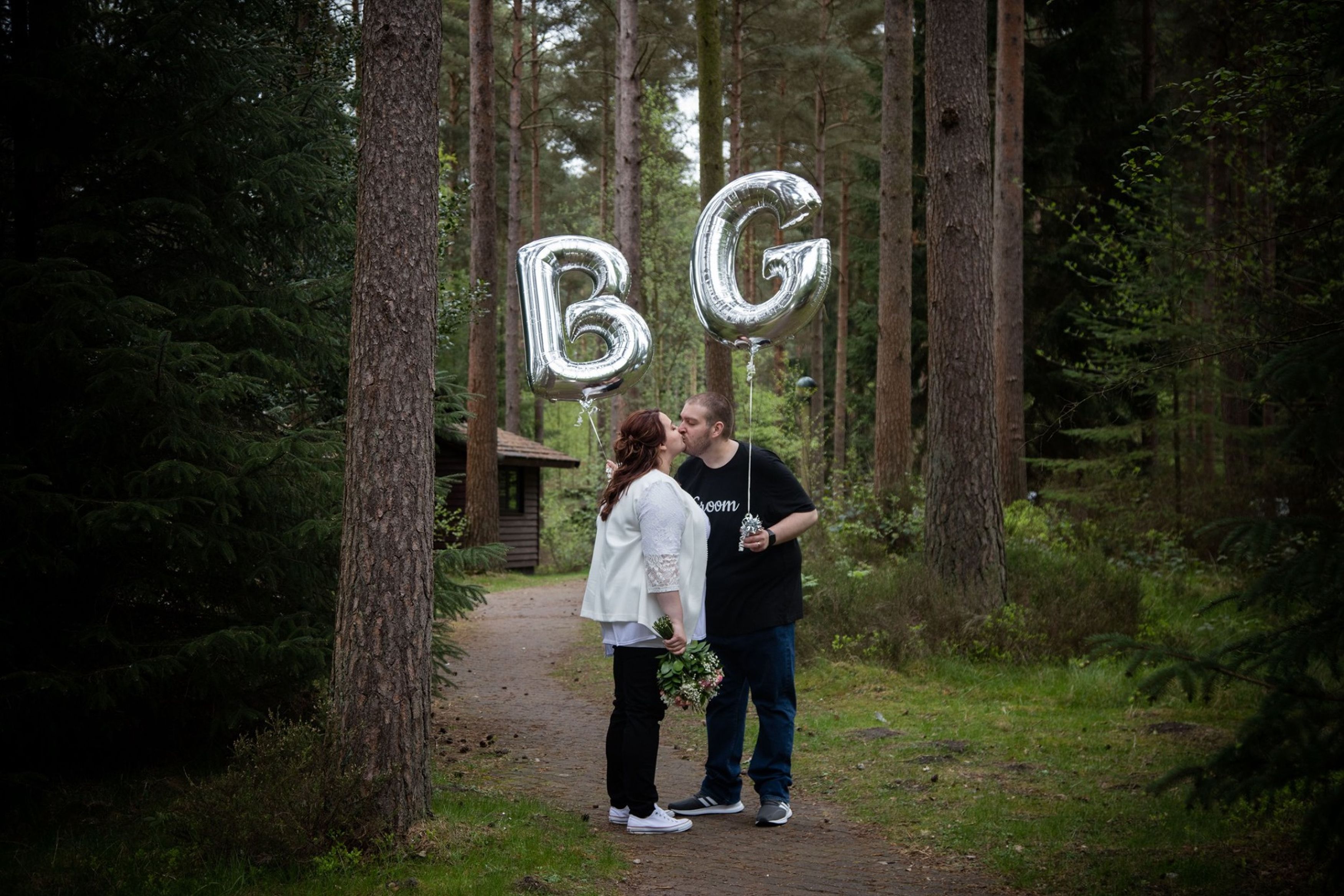 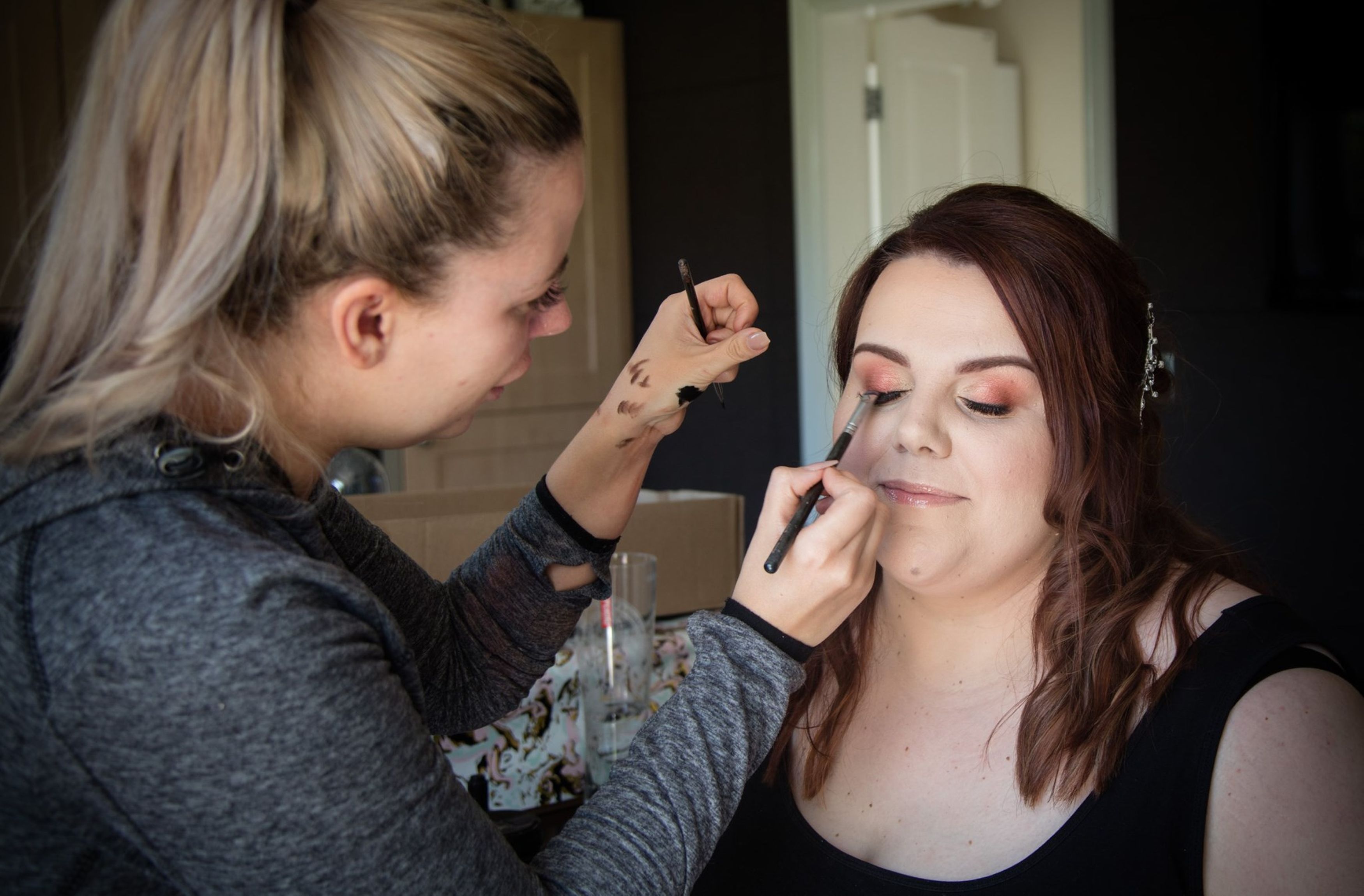 "It becomes like a big expensive show, a production for everyone else and the real reasons are lost in all that.

"It should be about how in love you are. I don't know anyone who gets married just because they think their partner is alright."

After being sucked in by all the picture-perfect weddings on social media, Rebecca and Glen originally started planning a Christmas 2018 wedding at a farm.

As people's expectations for a fancy day put pressure on the couple and their guest list spiralled out of control, their wedding looked set to cost Rebecca and Glen £14,000. 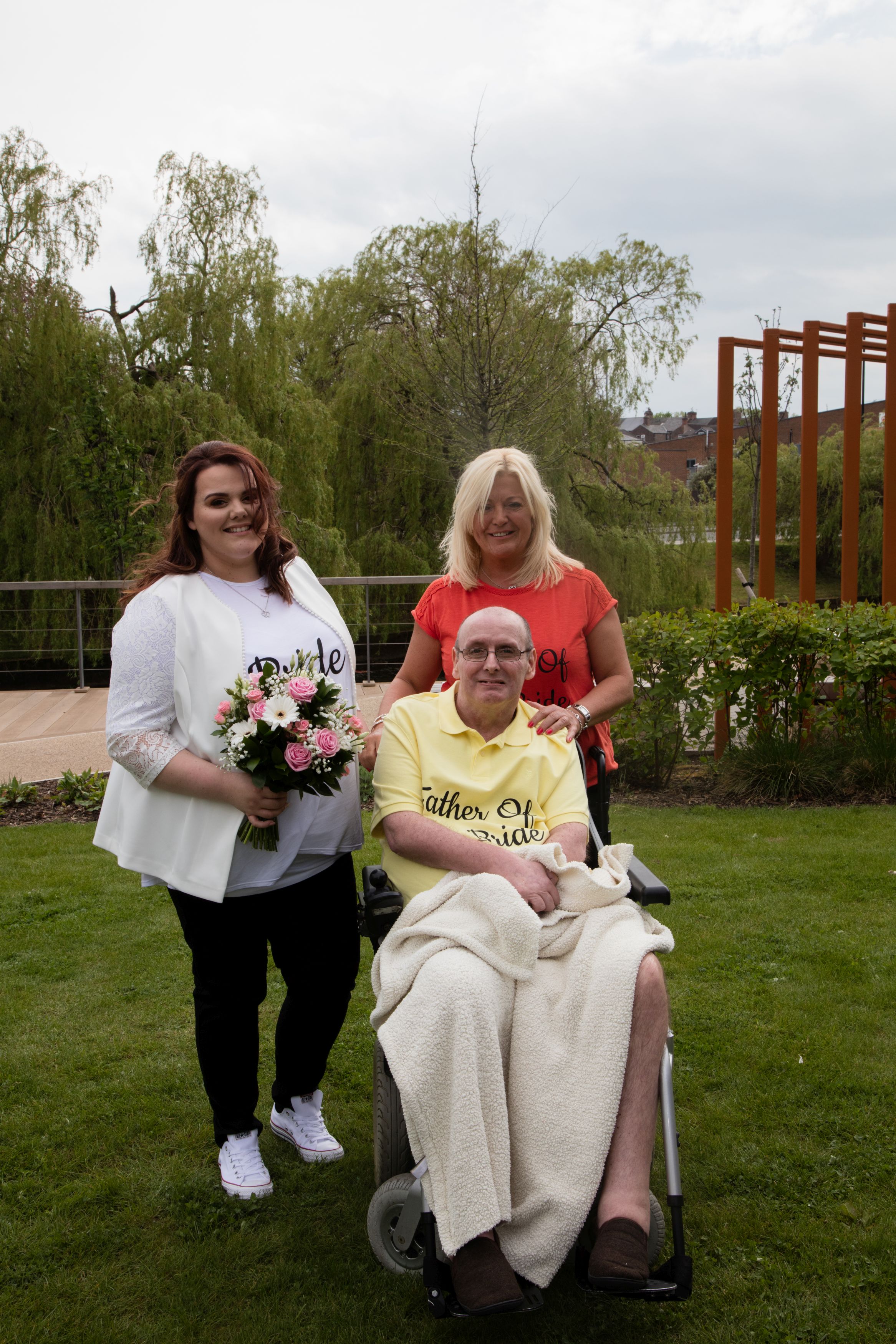 With the average wedding in the UK costing £30,000, many newlyweds are left in staggering debt after their big day but Rebecca and Glen never wanted to be in that position.

Instead, the bride and groom tied the knot at the town hall in Darlington, County Durham, on April 26 2019 with 40 of their closest friends and family members.

Not only did a registry office ceremony cost just £250 but it was the only venue with an aisle wide enough for Rebecca's wheelchair-bound dad Peter Snowdon, 59, to give her away.

After saying their I dos, Rebecca and Glen took their guests to one of their favourite places, Center Parcs Whinfell Forest in the Lake District, for a carvery dinner costing £400. 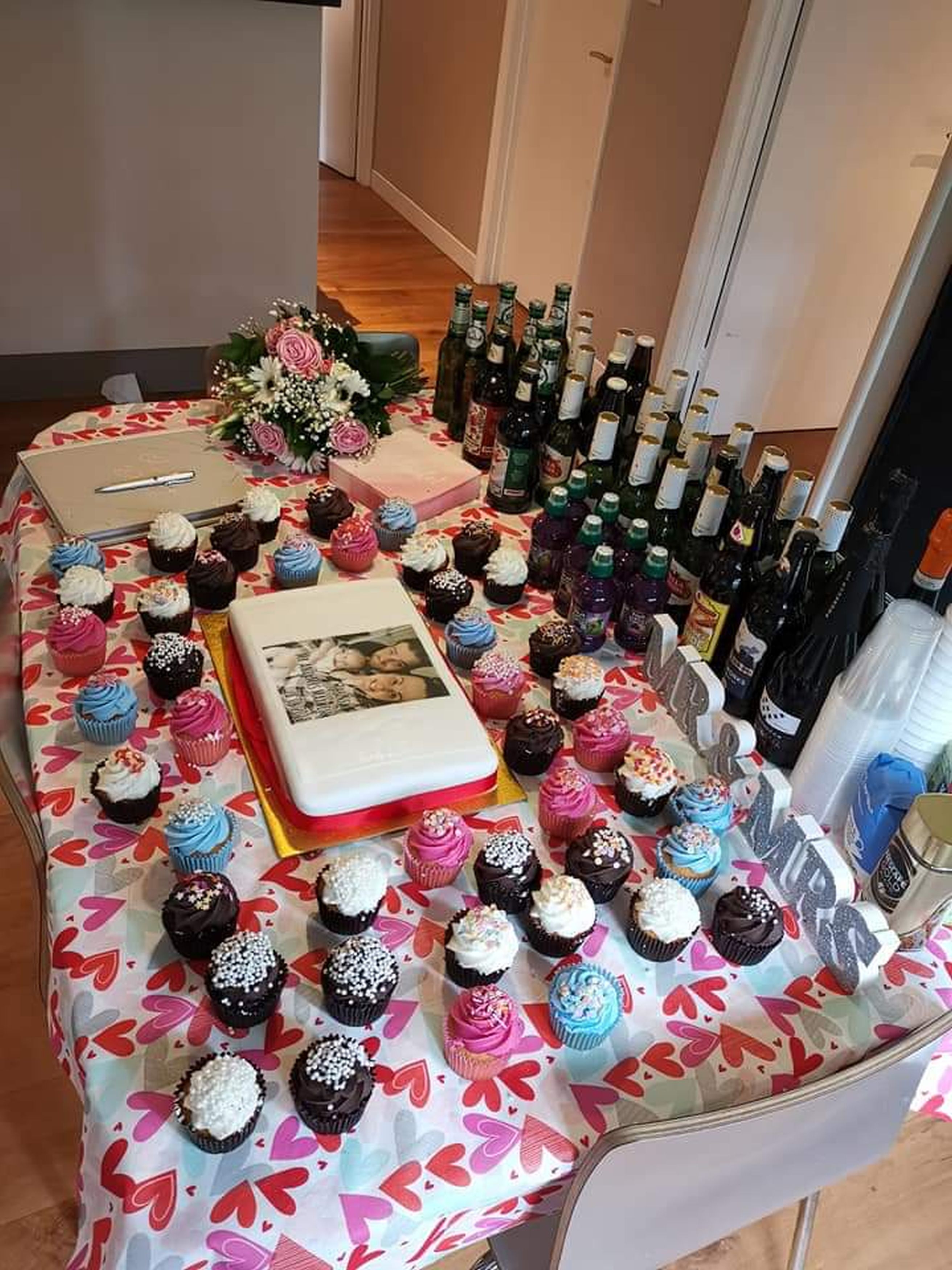 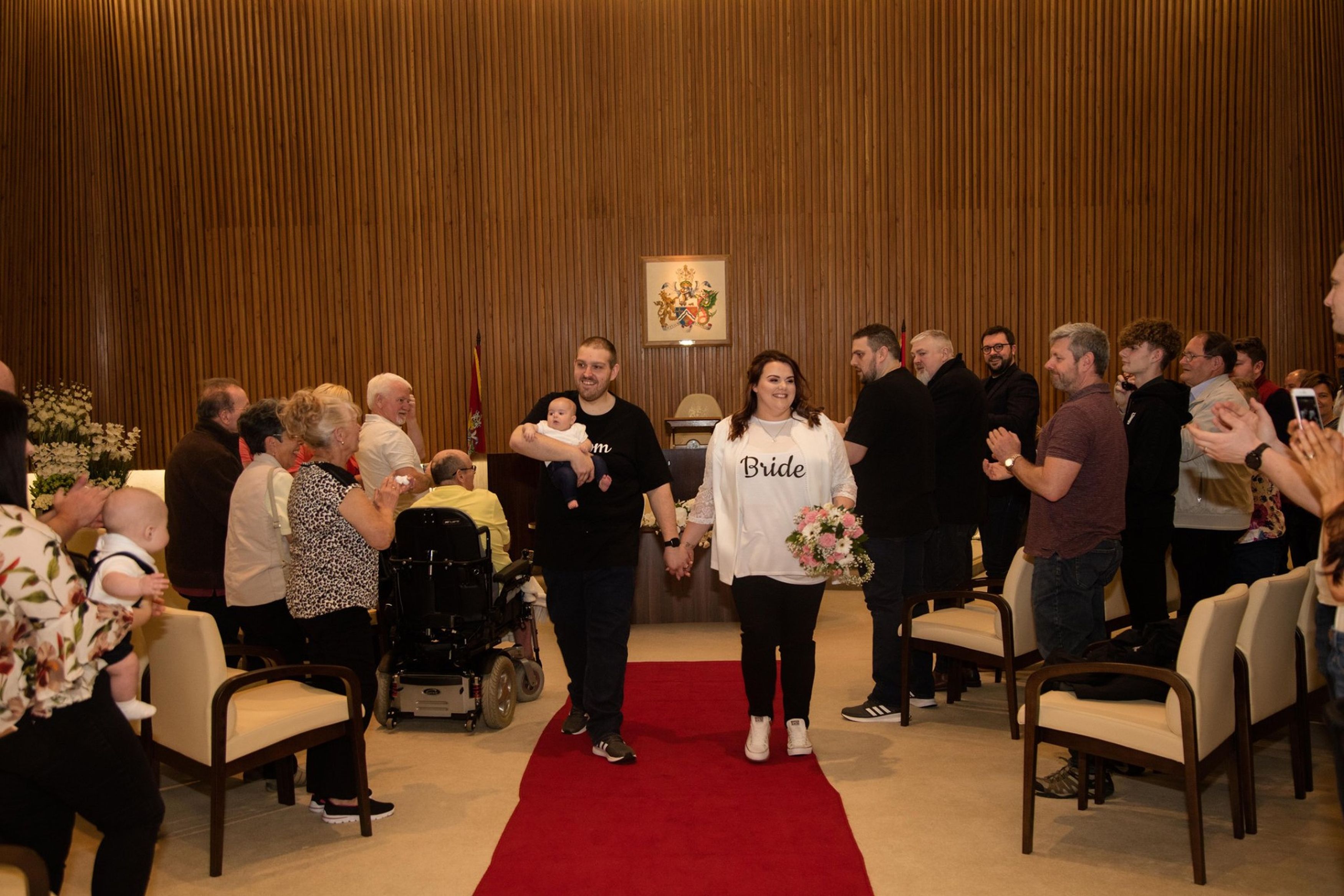 In place of a pricey wedding cake, the couple spent £35 on a selection of Morrisons' cupcakes and a sheet cake with a photo of them and Eleanor on it.

Saving so much on their wedding, meant Rebecca and Glen were left with £6,000 savings which they used to treat their wedding party to a weekend at Center Parcs.

Refusing to bow to pressure not only saved Rebecca and Glen £7,000 but also meant that instead of one special day they got days of fun and quality time with their loved ones. 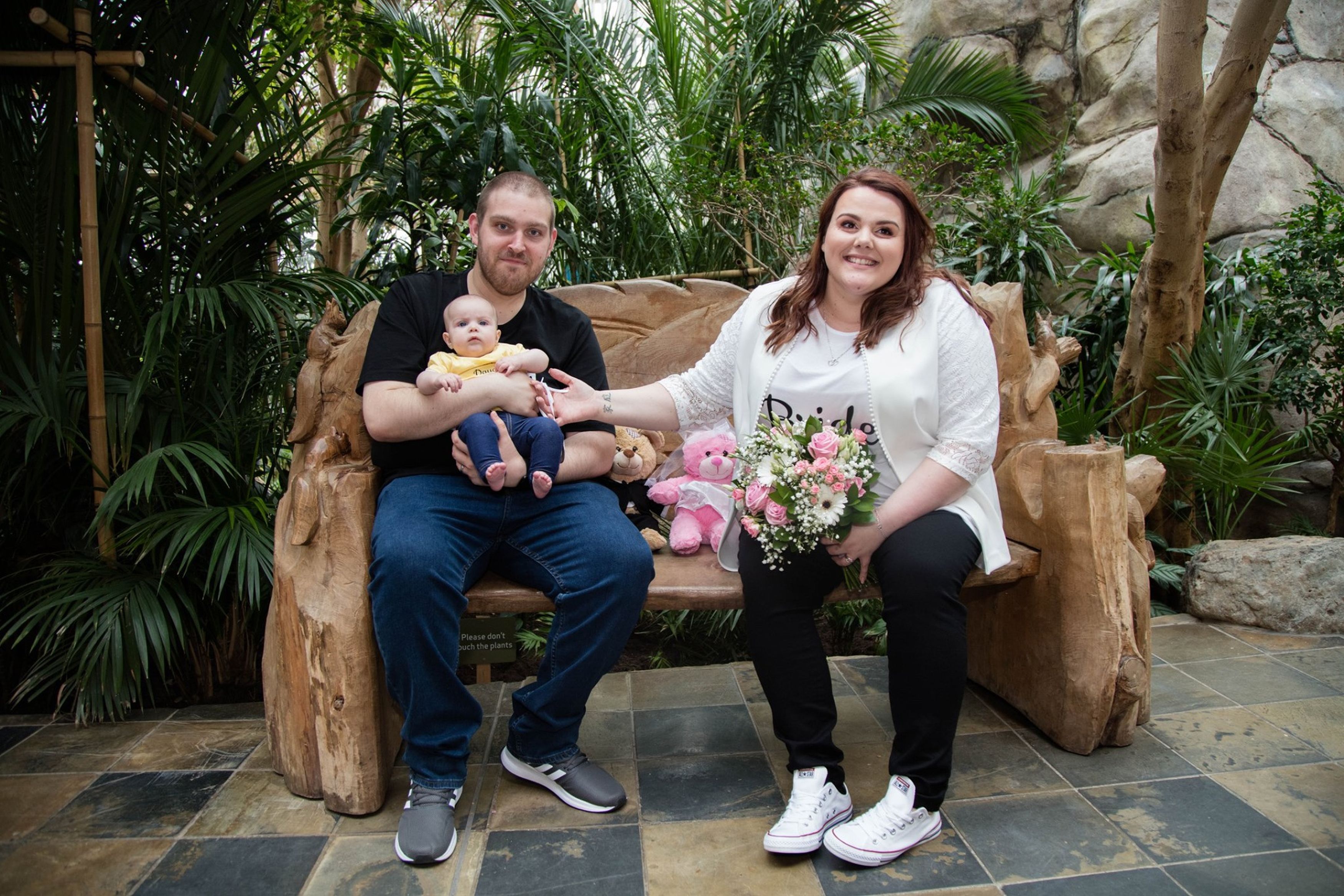 Rebecca said: "When we realised how much our big Christmas wedding was going to cost we just sat together and said 'this is crazy'.

"We couldn't justify spending that kind of money on just one day.

"Suddenly we were thinking 'how are we going to afford all of this?' instead of being excited about it.

"We love Center Parcs so we looked into the prices. We realised we could get married at the registry office with our closest friends and family and take everyone there for half the price.

"We decided to get together the 40 most important people in our lives and have a fun and relaxed weekend.

THE MAXWELLS' WEDDING IN NUMBERS

"I just wanted the people we love there to watch us commit to spending the rest of our lives together. It was lovely.

"I'm so close to my dad and having him walk me down the aisle was so important to me. The wide aisle at the registry office made that possible. It meant the world to both of us.

"Because he's in a wheelchair, just getting dressed let alone getting into a suit is so difficult for him so seeing him comfortable in a t-shirt was so special.

"All day and all weekend, everyone was so chilled out. It was perfect for us. I would recommend it to anybody." 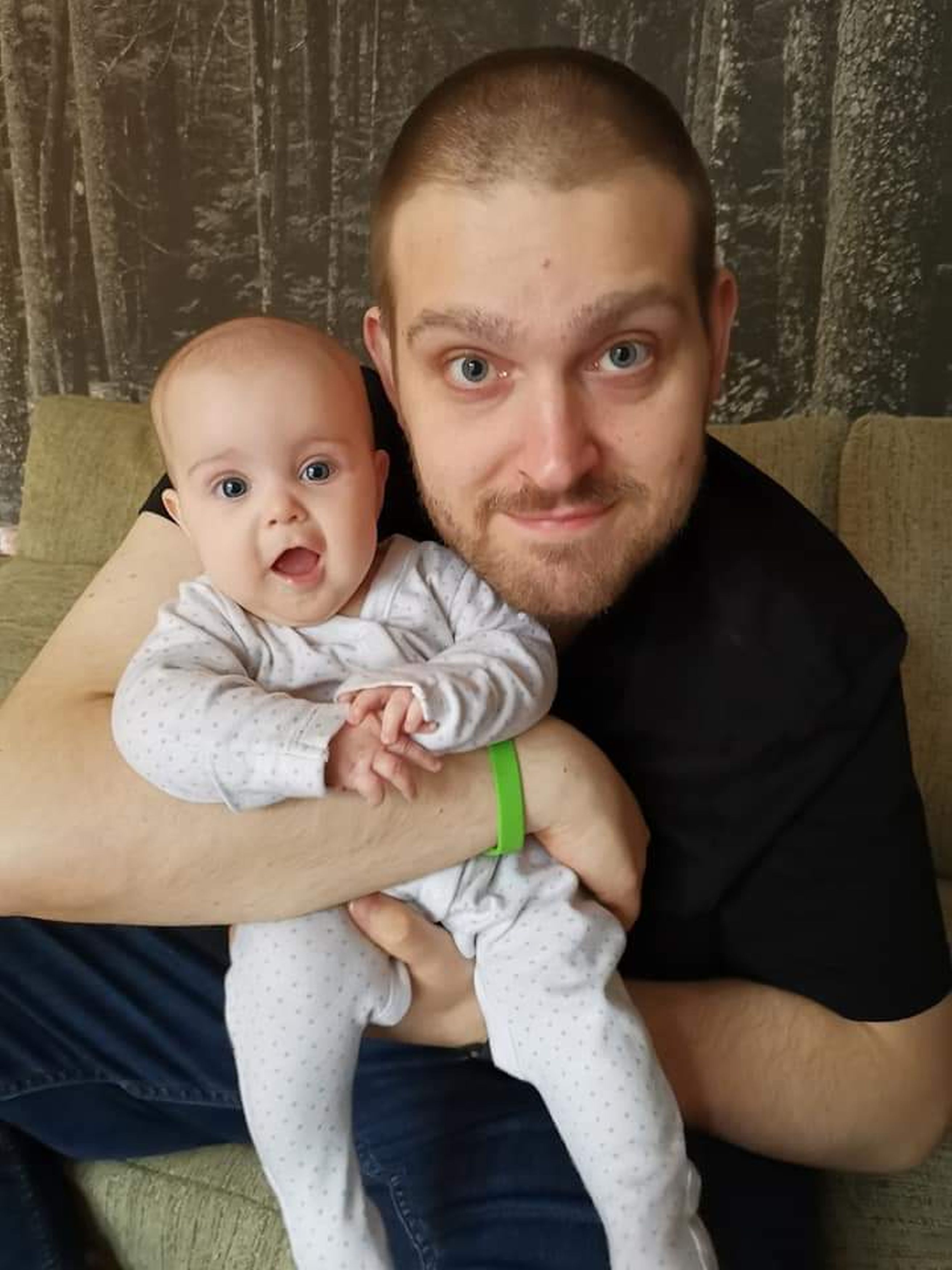 The mum and dad's wedding was booked for February 2019 but they decided to move it to April after discovering they were expecting the arrival of their baby girl in December 2018.

Rebecca had bought a wedding dress even for their more laid-back day but no longer felt comfortable in it after giving birth and didn't know how she would breastfeed Eleanor.

Instead the first-time mum got to be comfortable all day in her casual outfit not having to worry about sore feet from high heels and happily feeding her baby throughout the day.

While she would recommend a jeans and t-shirts wedding to everyone, Rebecca admits she has had mixed reactions to her bridal attire.

Rebecca said: "Being in jeans and t-shirts, it took a lot of the stress away.

I am a wife and a mum and that was fine by my. I didn't need to feel like a princess

"After having Eleanor, I didn't want to be the centre of attention. I wanted to be comfortable and to be able to breastfeed.

"I wasn't walking around thinking 'I wonder what people think I look like' because they see me in jeans and a t-shirt all the time.

"I was so comfortable all day. I didn't have aching feet from high heels and I could breastfeed Eleanor without making a fool of myself.

"I did get mixed reactions. Some people asked me 'don't you want to feel like a princess for the day?' but I didn't want that.

"I am a wife and a mum and that was fine by my. I didn't need to feel like a princess.

"A lot of people who've seen our photos have said how amazing it is and how they wish they'd had the balls to do that.

"Some people haven't been so positive but I'm past the haters now.

"We got to have a fantastic day and a whole weekend with our friends and family. Who are the real winners?"

In other wedding news, we told you how wedding shamers mocked a bride-to-be's multi-coloured engagement ring for looking like the Windows logo.

Meanwhile we revealed one bride decided to throw a fake wedding – then proposed to her unsuspecting boyfriend in a white bridal gown.