IF we ate the same thing for five to seven days every month we might start to question what was in it – and if it was good for us.

Yet when it comes to tampons, most of us will happily use them without even thinking twice about what they're made of. 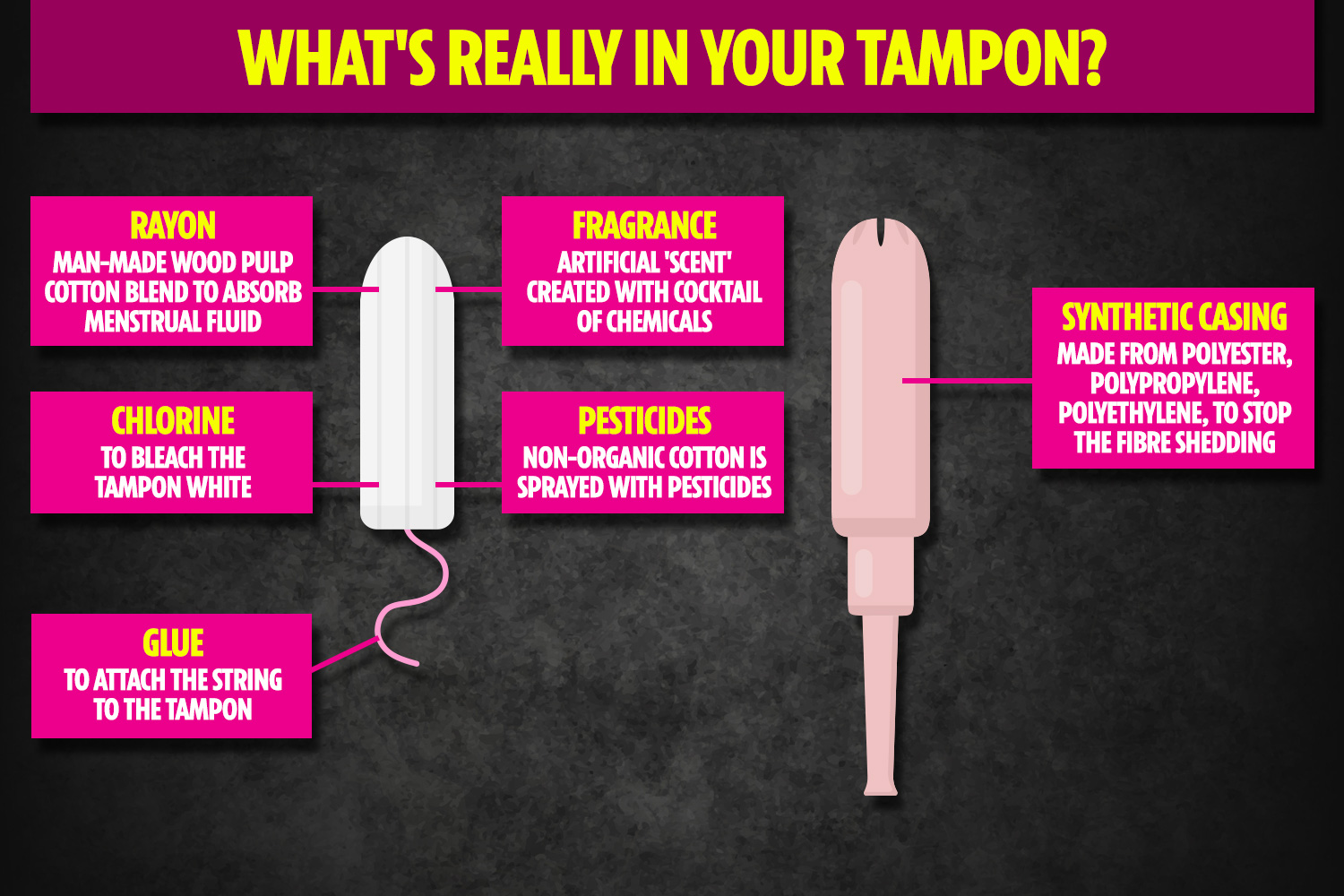 The vagina is the most absorbent part of the body, which means that the ingredients have the potential to make their way into the bloodstream.

And as the average woman uses around 12,000 tampons in her lifetime, it's probably worth knowing what they contain.

Most conventional tampons are made from a mix of synthetic super-absorbent materials.

Dr Alex Eskander, gynaecologist at The Gynae Centre, said: “Tampons usually comprise of absorbent packed cotton and other components to keep them sterile and are safe for use."

He emphasised that most tampons are totally safe to use and the main risk is when bacteria gets into the body.

This can lead to potentially life-threatening but also very rare conditions such as toxic shock syndrome (TSS).

Dr Eskander continued: "Generally, the use of tampons by leading manufacturers do not pose a health concern beyond the potential transfer of bacteria from the outside in, or not replacing tampons regularly enough, which could increase the chances of bacterial vaginosis and TSS.

"However, some women may find that they are allergic to some of the artificial materials, which could cause irritation so they may wish to use other methods.”

While the majority of tampons are safe, scientists have found that some synthetic fibres can remain inside the vagina which could be harmful, according to a 2014 Environ Health Perspect report.

"They concentrate menstrual proteins to a greater degree than cotton and provide 'an incredibly perfect physico-chemical environment' for toxin production."

What's in a tampon?

Natural cotton isn't perfectly white, so some tampons are bleached with chlorine to achieve that pearly white look.

Bleaching is the technical term for fibre purification and is also required to eliminate impurities and clean the fibres.

But chlorine can break down to dioxin – one of the most persistent and toxic chemicals, according to a 2018 report by the Environment Committee.

A tampon itself is made of rayon – a man-made fabric blended from cotton, wood pulp and other synthetic fibres.

According to the Food and Drug Administration in the United States, rayon raw material is produced using elemental chlorine-free bleaching processes.

Leading scientists at Harvard, Dartmouth, University of Wisconsin, University of Minnesota, and the U.S. Centers for Disease Control have conducted extensive testing confirming that rayon and cotton are equally safe, according to Tampax.

As most tampons are made from non-organic cotton, they will have likely been sprayed with pesticides.

Artificial scents are sometimes introduced to make the product smell nice or as an odour neutraliser.

But a mix of chemicals are needed to make the fragrance.

Many are the same as those used in other women's products, but to some they can be harmful.

Some tampons come with applicators, others are wrapped in individual plastic casing.

It's to stop the fibres shedding in the packaging before you can use them.

But these are often created using polyester, polypropylene or polyethylene – the same compounds used to make a plastic bag.

The string, used to remove the tampon, is sometimes attached to the tampon using adhesives.

In some braided designs, a polyester or polypropylene braid may be used.

What is Toxic Shock Syndrome?

Toxic shock syndrome (TSS) is a rare but potentially fatal condition caused by bacteria getting into the body and releasing harmful toxins.

Your condition will deteriorate rapidly and the infection can cause organ failure, or eventually death, if not treated immediately.

How to reduce your risk:

There are a number of ways you can reduce your risk of getting TSS:

If you’ve suffered from TSS before, stop using tampons and female barrier contraception.

Celia Pool, co-founder of organic tampon brand DAME, said: "If these were products we were putting in our mouths, we’d want to know what was in them.

"Why should it be any different if you’re putting it in your vagina?

"Women should be given full transparency around what they’re putting inside their bodies.”