1.The Seafood Salad from Taco Bell 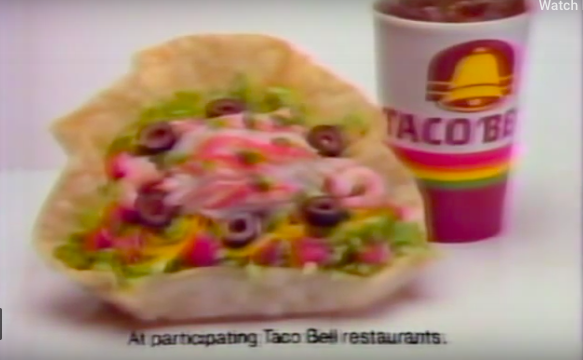 The Seafood Salad was a taco salad with shrimp and white fish instead of ground beef. Though it was on the menu in the ’80s, you won’t be able to find it anymore.

This was a burger, but it was packaged differently. The veggies were on one side of a two compartment styrofoam box to keep them cool, and the burger was on the other side to keep it warm. The McDLT was eventually discontinued due to the environmental impact of the packaging. 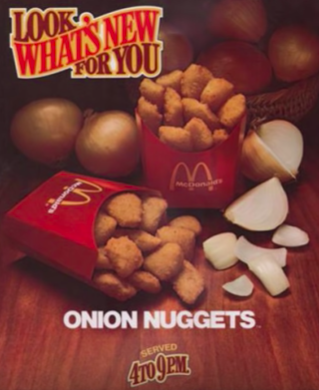 A side item in the ’70s at Mickey D’s, Onion Nuggets were basically onion rings shaped like chicken nuggets, an alternative for people who didn’t eat meat. They were short-lived and eventually got replaced with Chicken McNuggets.

4.The Hula Burger from McDonald’s 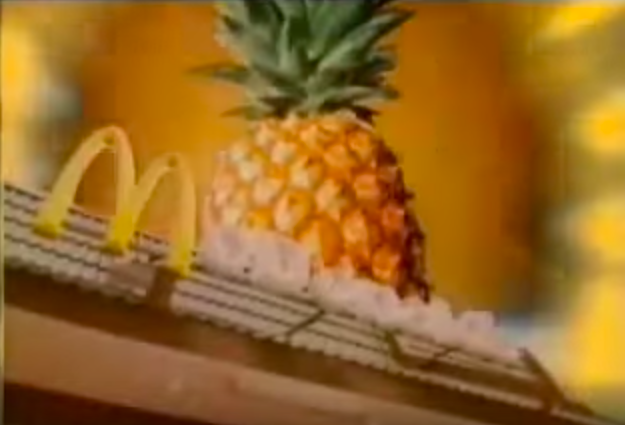 Take a burger, pull out the hamburger patty, then replace it with a huge slice of grilled pineapple. That’s what the hula burger was. It was essentially a pineapple sandwich with cheese. Instead of the Hula Burger staying on the menu as a beef alternative, McDonald’s opted for the Filet-o-Fish.

5.The Whopperito from Burger King 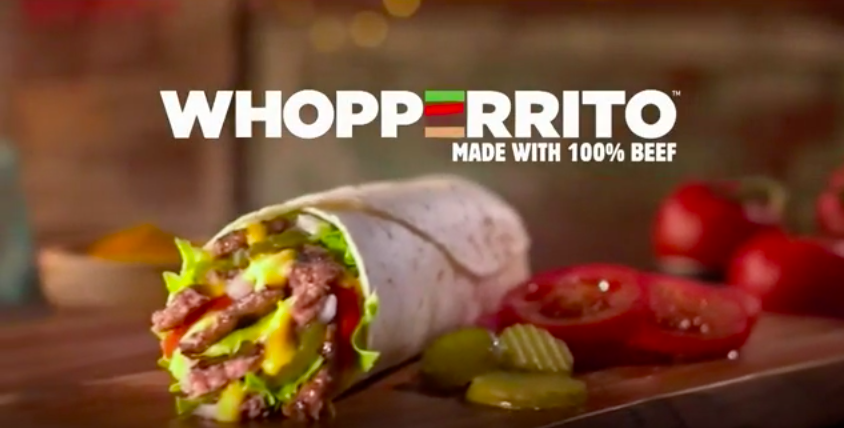 The Whopperito was exactly what it sounds like: a Whopper in burrito form. What was in it? It consisted of ground beef, tomatoes, lettuce, pickles, and a queso sauce wrapped in a tortilla. The beef was also seasoned differently to give it a Tex-Mex feel. RIP Whopperito.

6.The Double Down from KFC

KFC’s Double Down consisted of bacon, cheese, and special sauce sandwiched between two pieces of fried chicken in place of a bun. There were lovers. There were haters. There were critics. Though it was popular and definitely talked about, the Double Down was removed from the menu but has come back a few times for a very limited appearance.

7.The Bell Beefer from Taco Bell 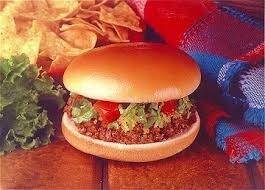 The Bell Beefer was the Taco Bell version of a sloppy joe. It was a bun, lettuce, taco meat, cheese, and sauce. It had a run on the menu from the ’70s to the ’90s. 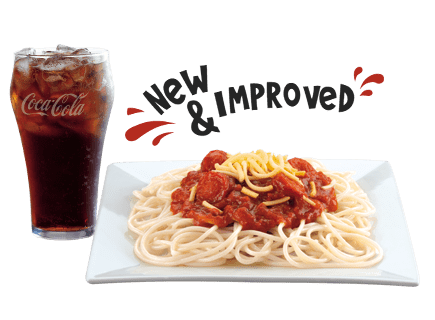 TECHNICALLY, you’re still be able to find the McSpaghetti regularly today. It’s served in the Philippines and one single store in Orlando, FL. If you aren’t in either of those places, your dreams of getting spaghetti at McDonald’s were shattered in the ’90s.

9.The Waffle Taco from Taco Bell 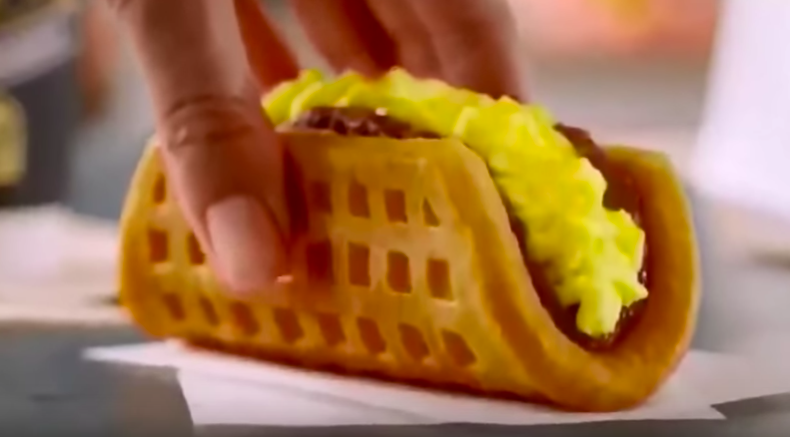 Taco Bell’s Waffle Taco was quirky, but a taco-shaped waffle stuffed with egg and sausage eventually got bumped for it’s biscuit-y relative.

10.The Biscuit Taco from Taco Bell 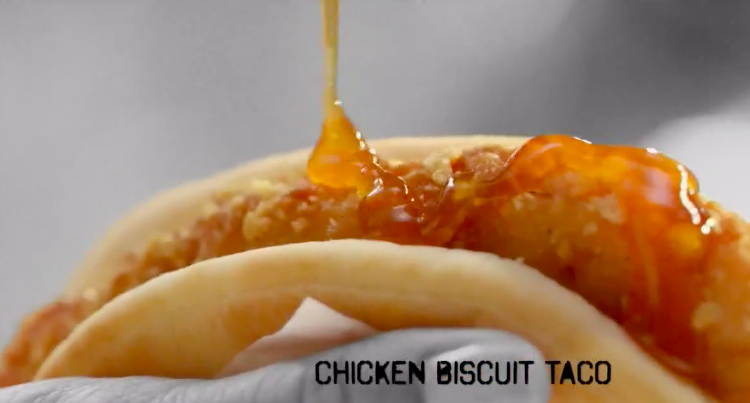 The Biscuit Taco, filled with fried chicken and a jalapeño honey, replaced the Waffle Taco, but it didn’t stay on the menu for long either. Taco Bell eventually found breakfast staples for their menu in the form of their Breakfast Crunchwrap and Grande Scrambler.

Sonic Drive-In used to serve fried pickles! While they’re no longer on the menu, some avid Sonic-goers claim you can still special request fried pickles at select locations.

12.The Breeze from Dairy Queen 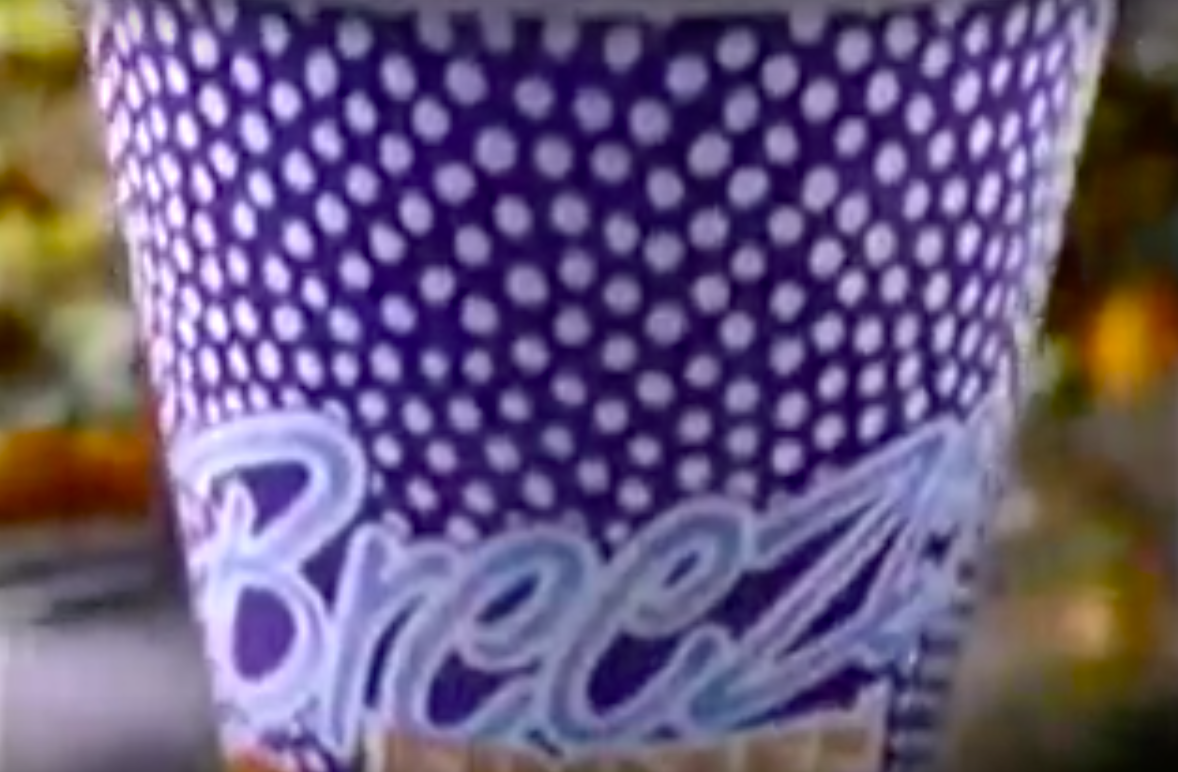 The DQ Breeze was the healthier alternative to the Blizzard, made with frozen yogurt instead of ice cream. Looks like people preferred the good ol’ Blizzard because the Breeze is no longer on the menu.

13.The McHot Dog from McDonald’s

The owner, Ray Kroc, forbade the company from selling hot dogs because he thought the unknown ingredients under the skin contradicted his quality standards. That didn’t stop them from trying it on the menu, even though it was short-lived. 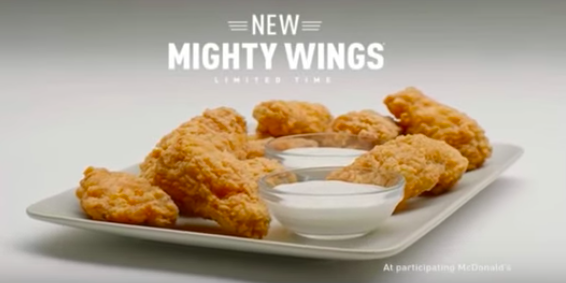 McDonald’s used to sell wings, but they were too spicy for customers and too costly to keep on the menu, so they were scrapped in 2013.

15.The McLean Deluxe from McDonald’s 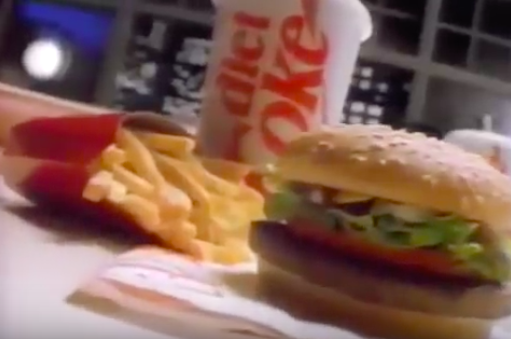 The McLean Deluxe, sold by McDonald’s, was 91% fat-free. It replaced some of that fat with a seaweed-based additive, but it didn’t go over well. 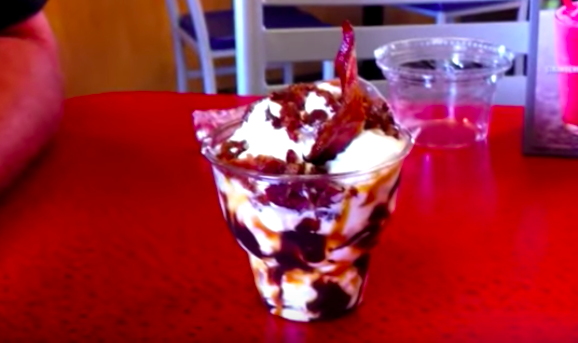 Bacon and chocolate is a thing and I accept that. I can appreciate the salty and sweet combo, but I also can’t stomach vanilla soft-serve from Burger King with chocolate drizzle, caramel drizzle, and bacon bits on top. The frozen delight debuted in 2012, but hasn’t been back since.