New York is known for many foods — like bagels and pizza — probably the sweetest of them being cheesecake.

While there are many bakeries and restaurants that have been recognized for their cheesecakes, Junior's Restaurant and Bakery is something of a legend. Even Senator Chuck Schumer said in a press conference that "It's the best cheesecake in the world."

The cheesecake joint dates all the way back to 1950 with a single location in Brooklyn. Today, it has five locations across New York and Connecticut — two of which are located in Manhattan's Times Square, an area that sees around 400,000 pedestrians per day.

So, as a cheesecake and diner lover myself, I went to eat at the 49th Street and Broadway location to see what all the hype is about.

I hopped on the subway and made my way to Junior's in Times Square where I was going to try one of the best cheesecakes in New York. 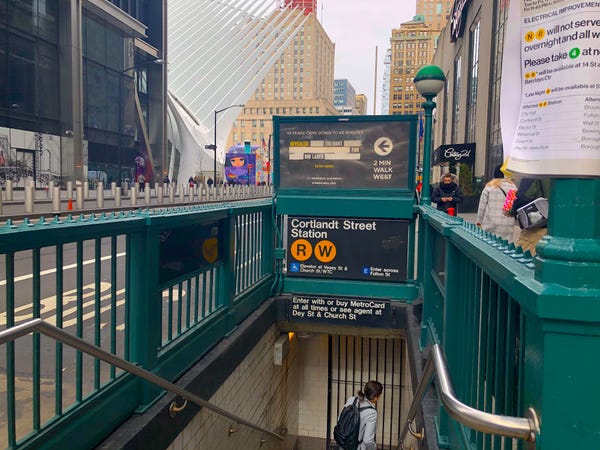 Junior's has five locations spanning New York and Connecticut. The original location is in Brooklyn, but I kept it local and visited one of the two Times Square locations for this review.

I walked up to the marquee-like signage and immediately thought this would either be really legit, or really gimmicky. 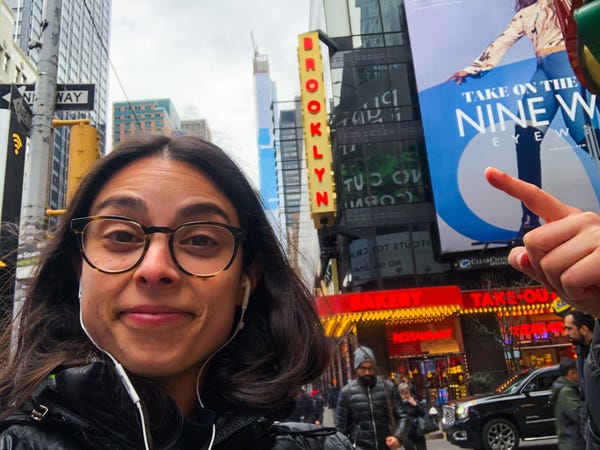 I'm always skeptical of trying anything in Times Square simply because it's a tourist hub.

In my experience, restaurants and attractions in tourist hubs around the world don't always have the best or most authentic foods. And even when it is good, it's usually overpriced.

That being said, I have definitely had some great food in heavily toured areas — it's not impossible, just unusual.

When I first walked in, I came face-to-face with the dessert case. 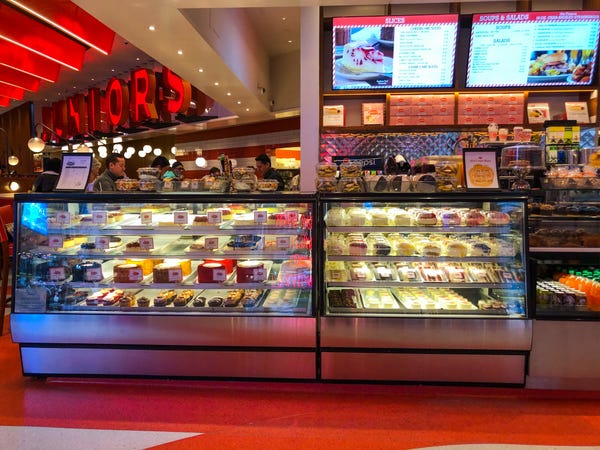 It was beautifully overwhelming. There were large cakes, single slices, cookies, and other pastries as well.

Then I noticed something that, to me, is the true sign of a New York diner-type restaurant: Dr. Brown's soda. 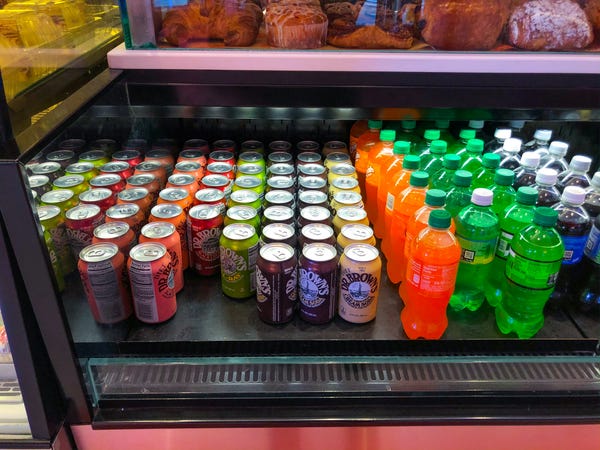 It may sound strange, but seeing this drink that I consider to be a classic put my mind at ease. It made me think that this would, in fact, be a legitimate New York experience.

The restaurant was giant compared to the typical restaurant sizes I've seen in my city, but it didn't feel too big. 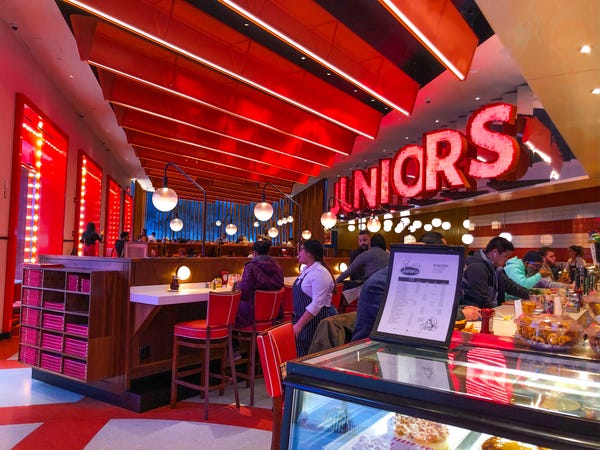 I felt like I was in a large, recently redone diner in the suburbs with the counter space and dual-tiered seating areas.

Even though most restaurants in Manhattan are tiny, there are a number of Times Square eateries that are just as large as this one.

I took a spot at the counter, because I always do, and was greeted with a smile and a menu. 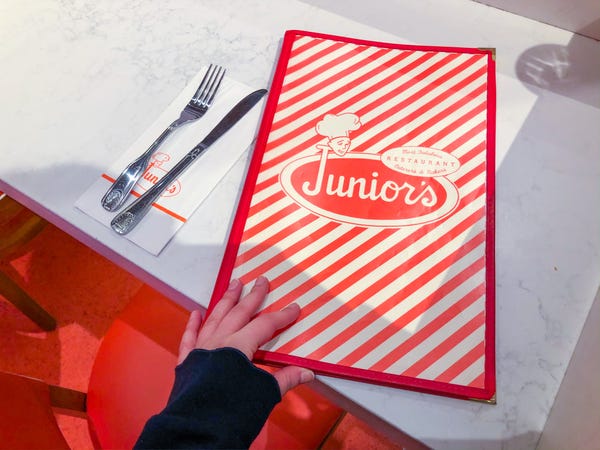 I love sitting at the counter at restaurants and diners because it allows me to interact with other diners. It also guarantees quicker service as there's typically always someone behind the bar.

At this Junior's location, there was a bar-facing counter and a dining room-facing counter. I went with the bar so I could ask the bartender questions.

My narrow view also helped me to forget how large the restaurant was, and it made me feel like I was at a smaller NYC diner.

I visited in the middle of the day on a Friday, and there were a few other people eating next to me. 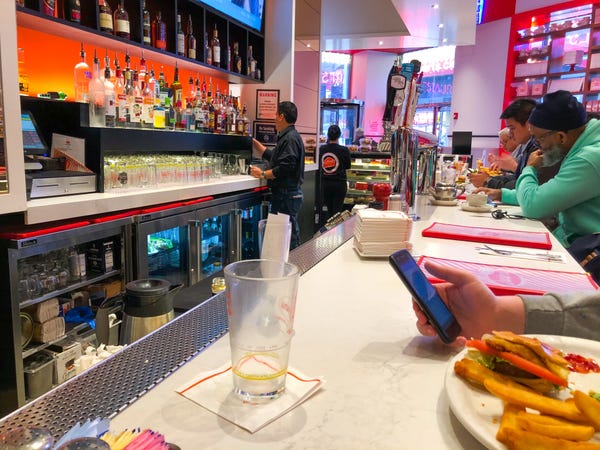 They were having lunches of burgers, wraps, and salads, but I was there for one thing and one thing only: the cheesecake.

I ordered "a slice of cheesecake," to which the bartender replied, "Classic?" with a smile. He knew exactly what I wanted. 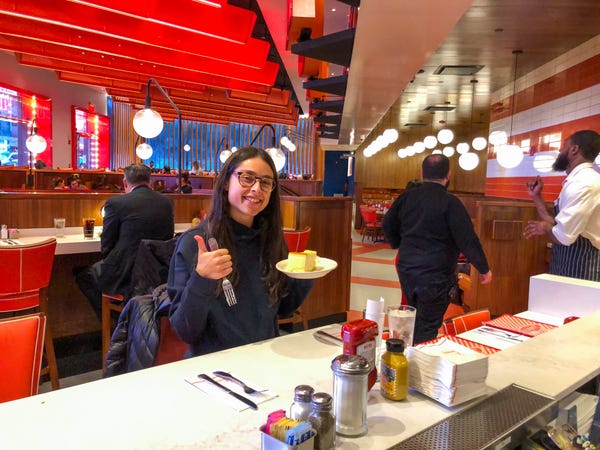 The slice of cheesecake came to my place setting a few minutes later. It stood there on its dessert plate, tall and strong. Unwavering in the face of a quickly-moving carrier.

Examining the slice I noticed that it was essentially crustless. 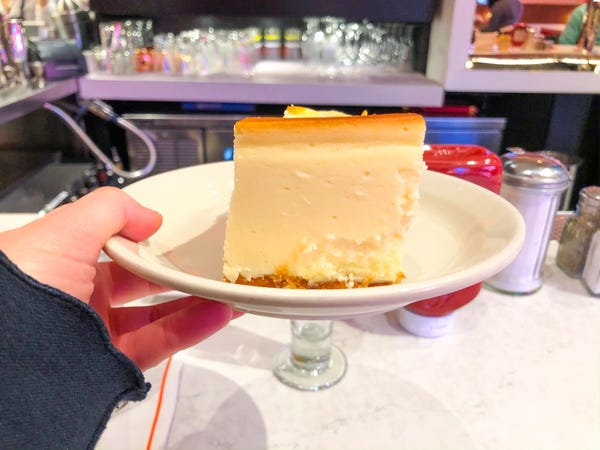 While there was a thin layer of cake on the bottom of the slice, that hardly classifies as a crust, in my opinion.

I glided my fork through the silky cake and took my first bite. It was dense and sweet. 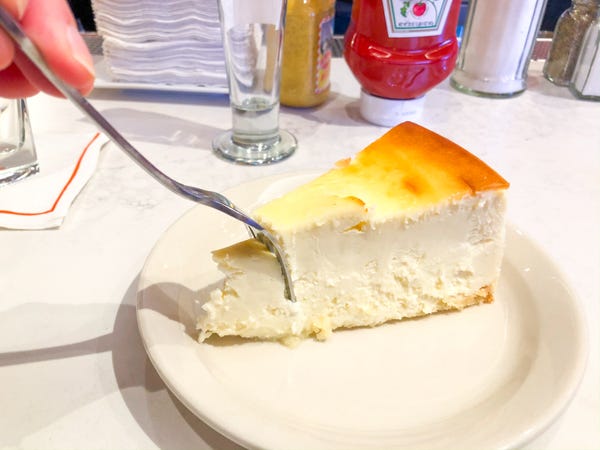 The first thing I thought was, "Wow! This is a heavy cake."

It was so dense that I kind of felt like I was eating a brick of cream cheese. But that wasn't necessarily a bad thing.

The next thing that hit me was how sweet it was. I didn't think it was too overwhelming, but I already knew there was no way I could finish the entire slice myself.

The combination of the sweetness and the density made this dessert heavy on the cheese, light on the cake.

The flavor was pretty distinct, and I felt like I could taste the different ingredients. 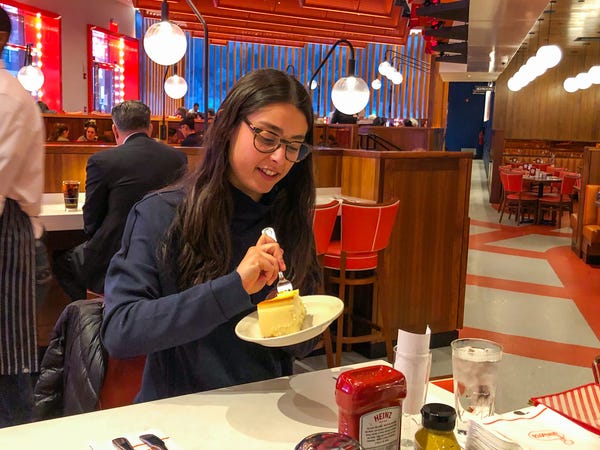 It tasted first and foremost like cream cheese. Then, I got — more specifically — flavors I recognized from sweetened condensed milk.

It turns out that sweetened condensed milk might not be part of the recipe, according to the restaurant. Junior's lists "premium cream cheese, fresh heavy cream, eggs, and a touch of vanilla" as the ingredients for its cake.

The bottom of the cheesecake slice was more cakey than crusty and it had an extremely familiar taste. I thought it closely resembled the cake-like bottom of a black and white cookie — another diner classic — if it were moist.

The bright orange color scheme throughout the restaurant was pretty iconic. 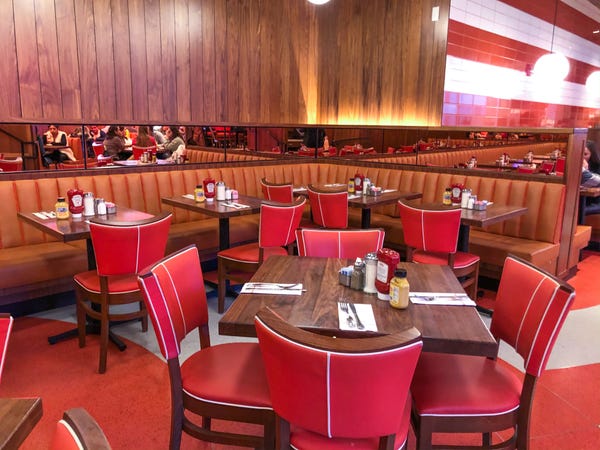 Everything from the signage to the take-away bags to the chairs was slathered in this bright orange color.

The consistency kept the entire restaurant on-theme and gave it, again, a true diner vibe, in my opinion.

I thought the cheesecake was good, but I think dining in is what really made the experience. 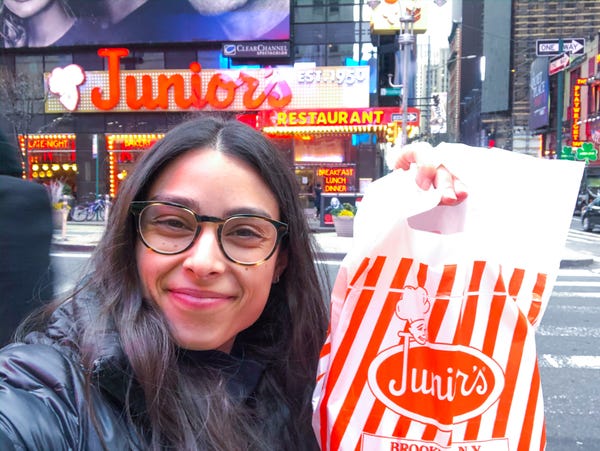 I still thought the cheesecake was tasty when I had my last bite back at my office, but I think it was more memorable when it was part of the experience of eating at Junior's restaurant.