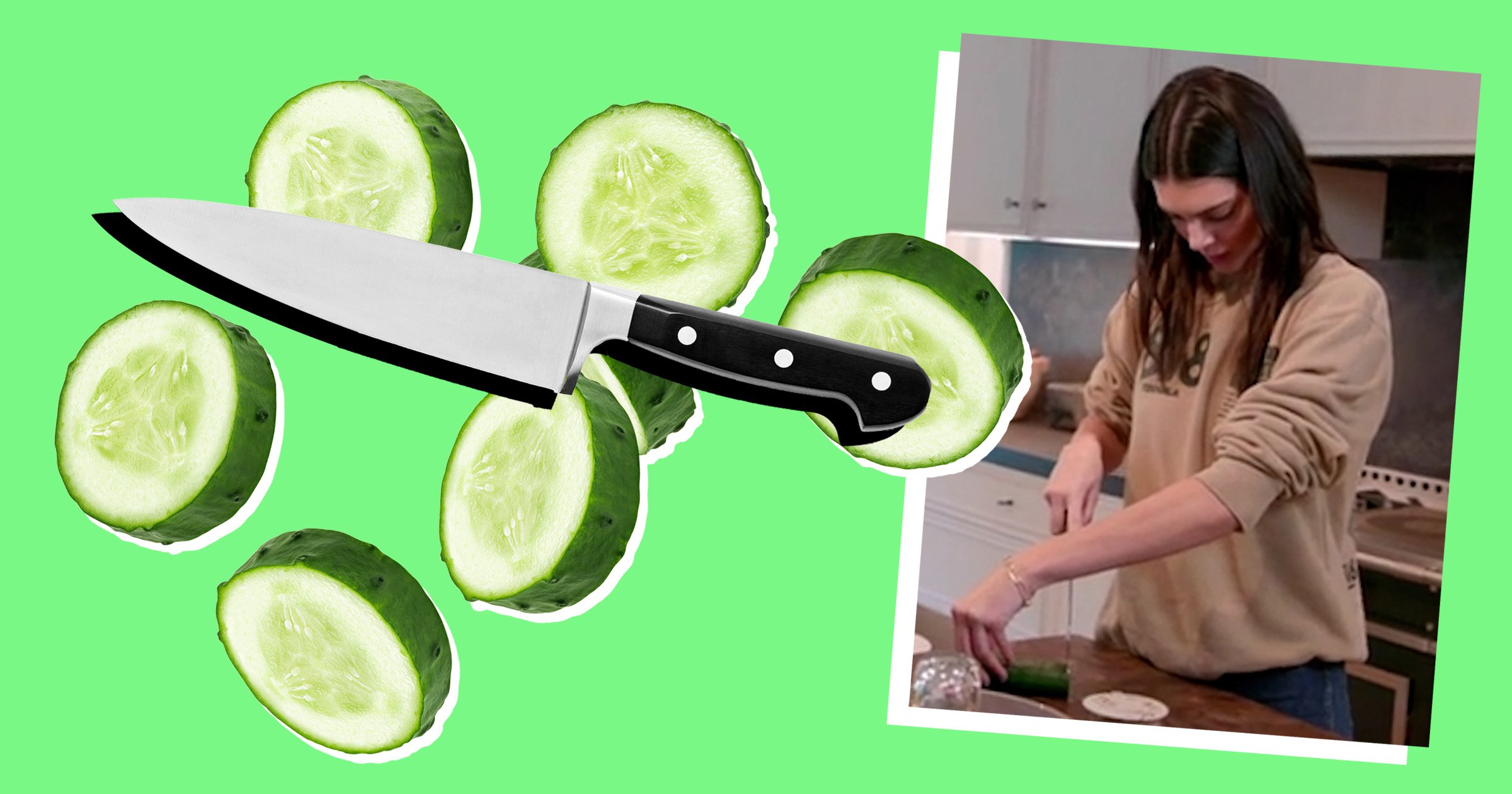 Sometimes it’s the simplest things that remind us that celebrities are just normal people, like us.

You’ve probably seen it by now, but the latest episode of Keeping Up With The Kardashians has got the internet talking, as viewers watched Kendall Jenner try, and fail, to cut a cucumber.

In fact, the said clip has sent the internet into meltdown.

The 26-year-old model can be seen in the kitchen with her mum, Kris, who asks: ‘Do you want the chef to make you a snack?’

To which she replies: ‘I’m making it myself. I’ve just got to chop up some cucumber. It’s pretty easy.’

But what follows is what can only be described as an unusual – not to mention pretty unsafe – way of preparing the vegetable, as she criss-crosses her arms to hold it, with one hand on the end of the cucumber and the other holding the knife.

If, like Kendall, you could do with brushing up on your cucumber-cutting skills, we’ve asked top chefs to share how to do it.

Asimakis Chaniotis, who is the executive chef at Michelin-starred Pied à Terre, says there are a few different ways you can cut cucumbers – but he stresses the importance of creating a flat base to steady the veg.

He tells Metro.co.uk: ‘With regards to cucumbers, we have a couple of ways – because a cucumber is a round vegetable and it’s quite slippery to cut.

‘So one way would be to cut it length-ways, so cut it in half to create two hemispheres – so you have a base which you can then slice, or cut again length-ways.

‘It’s very hard to dice cucumber because it’s so slippery, so you need to make a base – so you cut it in half or into quarters.’

You may have realised that this is where Kendall went terribly wrong.

Asimakis says there are a few other ways you can cut it, too.

He adds: ‘Another way would be to use a mandolin to have nice round, thin slices.

‘Then sometimes if you don’t want to use the seeds, you do the same thing as before. You cut the cucumber in half length-ways, to make a base, and use a spoon to de-seed the cucumber. And then cut it in half and cut it into pieces.’

In terms of general safety tips Shaulan Steenson, the executive chef at TEMAKI in Brixton, has a few, too.

He says: ‘The most important part of preparing any vegetable is to use your non-dominant hand as a guide, with the majority of the vegetable behind your guide hand and slice through the vegetable – rather than chopping down, and bursting the cells.’

If you’re feeling more confident, you can also try getting a little experimental with it.

Shaulan adds: ‘As with all vegetables, different techniques are used for different results to suit different dishes.

‘For sushi, we mainly shred cucumbers by peeling the cucumber with a knife into a long, thin sheet discarding the core, then slicing it into fine threads.

‘But this is probably the antithesis of Jenner!’