When you hear Idaho, you probably think of potatoes. You can even sleep inside one there!

So it didn't come as a huge surprise to me, on a recent trip to Boise, when the Boise Fry Company kept coming up as the city's most beloved fast-food spot.

As its name implies, the Boise Fry Company is all about fries — its slogan is even "Burgers on the side." The menu has six different kinds of potatoes to choose from, as well as five different cuts, like curly or shoestring. It also has a whopping nine different homemade dipping sauces and a variety of seasonings.

Never one to back away from a challenge, I visited the Boise Fry Company and tried every potato, cut, and sauce for the ultimate taste test.

The Boise Fry Company kept getting suggested to me as a spot that locals love. 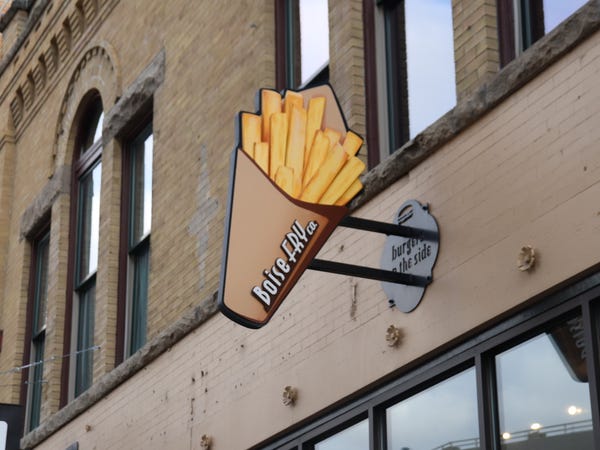 It has five locations, all of them in or around Boise.

Bright-orange stools, exposed brick, iron beams, and patio lights made the place feel less like a fast-food joint and more like a fast-casual spot that happens to have counter service. 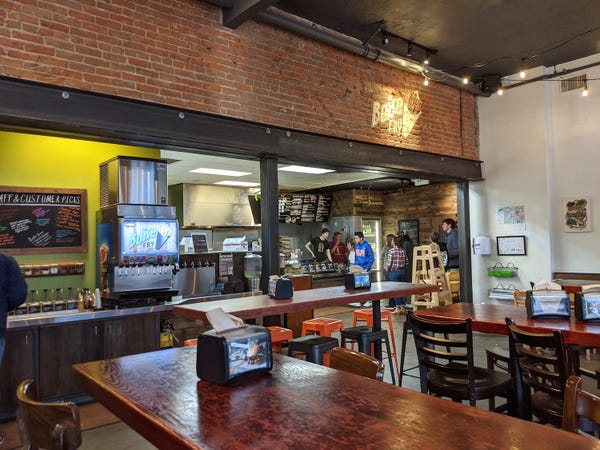 It felt more like a pub than a fast-food spot, and also served a bunch of beers on tap.

The menu is extensive, and while it also features burgers, salads, and a somewhat random poutine, they're really all about the fries. 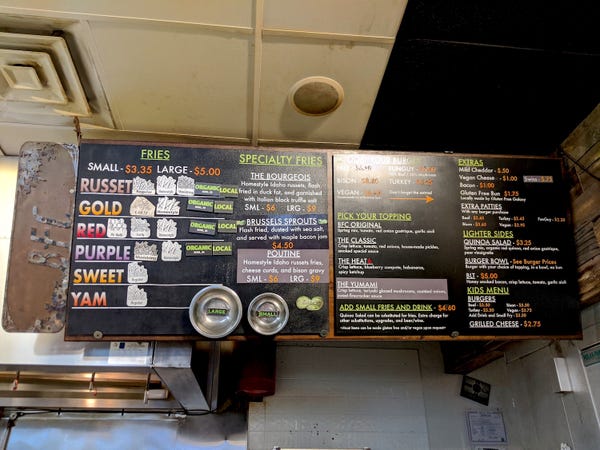 The slogan is "burgers on the side," so I chose to just stick to fries for my order. And I steered clear of the poutine, having eaten more than enough on a recent trip to Quebec City.

There are six kinds of potatoes and five different cuts to choose from. 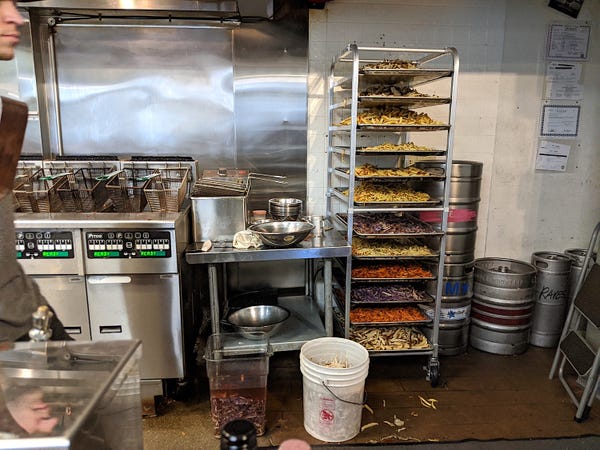 Not all potatoes come in all cuts, however. For example, sweet potatoes and yams only come in a regular cut, while russet potatoes can be ordered as regular, homestyle, or shoestring. 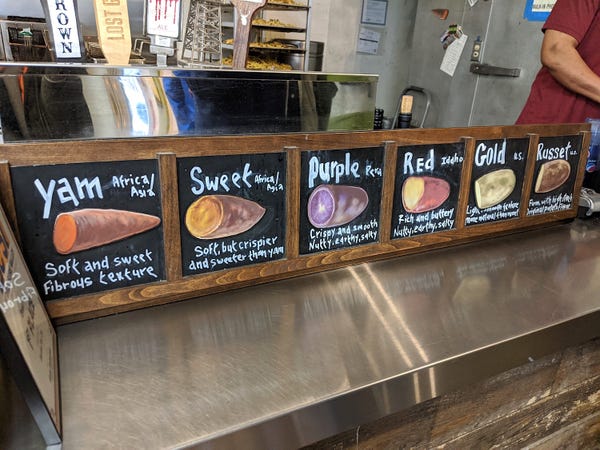 I liked that the Boise Fry Company tells customers where the potatoes are sourced and gives details on their taste and texture.

I ordered the russet potato as a homestyle fry, the gold potato in curly form, the red potato as po' balls, the purple as shoestrings, and both the sweet potato and yam as a regular fry. 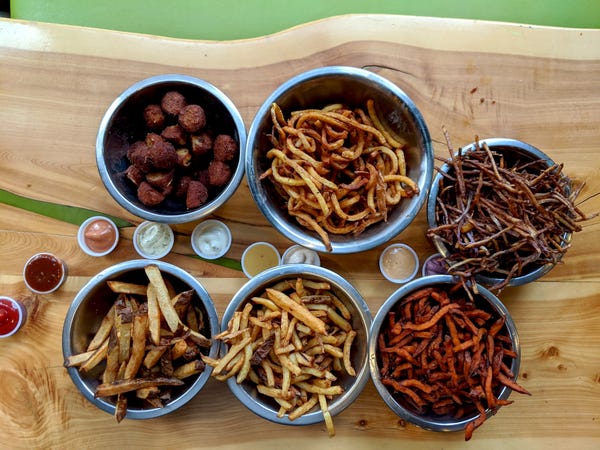 Next time, I'd test my taste buds by trying all the different potato variations in the same cut to see if I can taste the differences between them.

There were nine dipping sauces and a variety of additional seasonings and flavored salts. 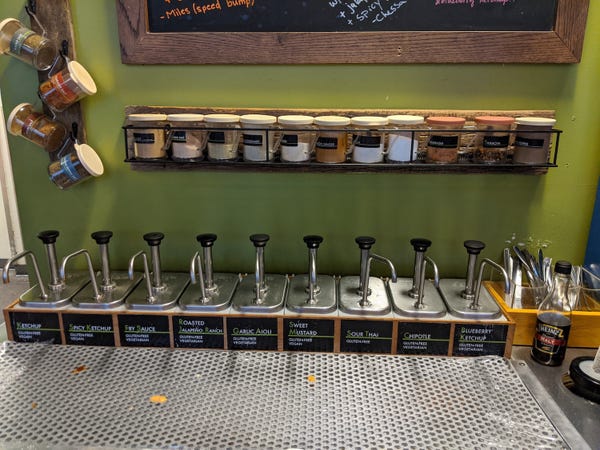 I didn't mess with the seasonings because I had enough varieties to keep track of, but staff and customer suggestions on a chalkboard included garlic and rosemary russet fries with garlic aioli, and red homestyle fries with togarashi salt and sweet mustard.

Between the potatoes, cuts, seasoning, and sauces, the combinations feel endless and fries are fully customizable. 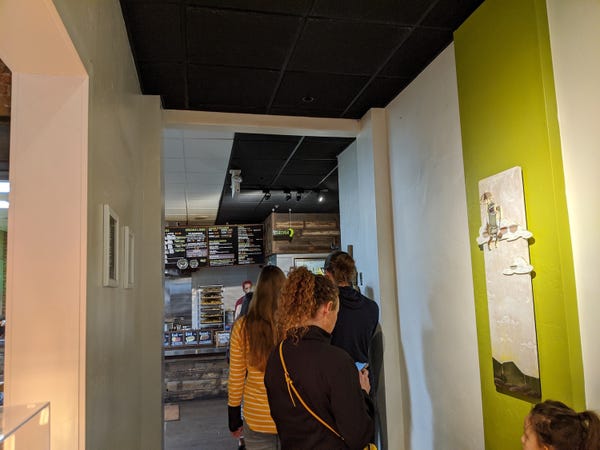 No wonder people love this spot. There was a lengthy line when I visited. 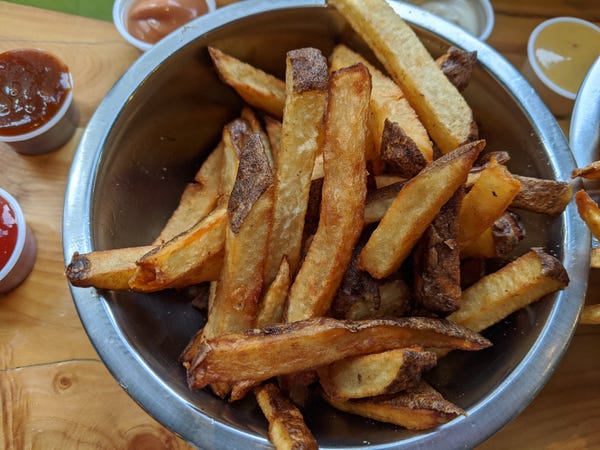 It tasted a bit bland to me without salt, and could have probably used some seasonings. However, these homestyle fries were a reliable standard, and had a nice amount of skin left on that added both flavor and texture.

The curly gold potato fries were a bit of a disappointment to me, and didn't look that curly to me. 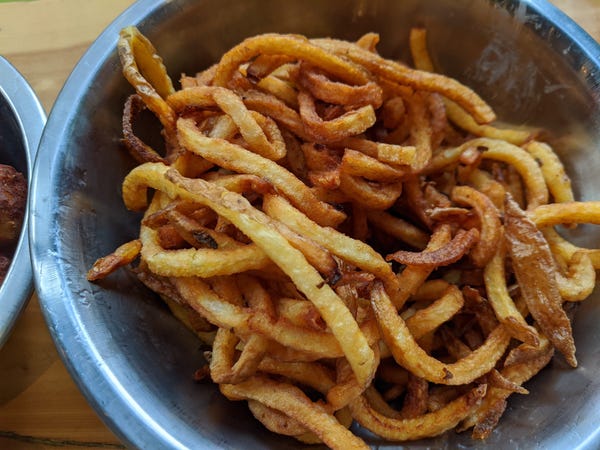 I love a good curly fry, but these displayed none of the spring I expected them to have. Instead, I found them a bit limp and soggy, and a touch more greasy than the rest of my order.

The red potato po' balls were basically croquettes: lusciously creamy on the inside, and perfectly crisp on the outside. 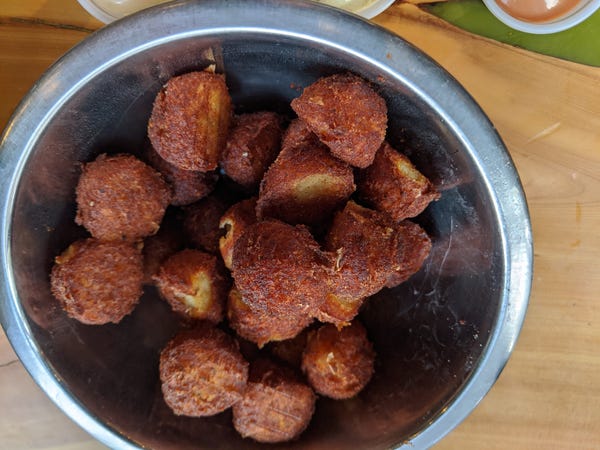 I liked them a lot, though they were a bit much for me: No one needs an entire bowl of croquettes. This felt more like an appetizer to split rather than a side dish.

The purple shoestring fries were my least favorite. In my opinion, there were all crunch and no potato meat. 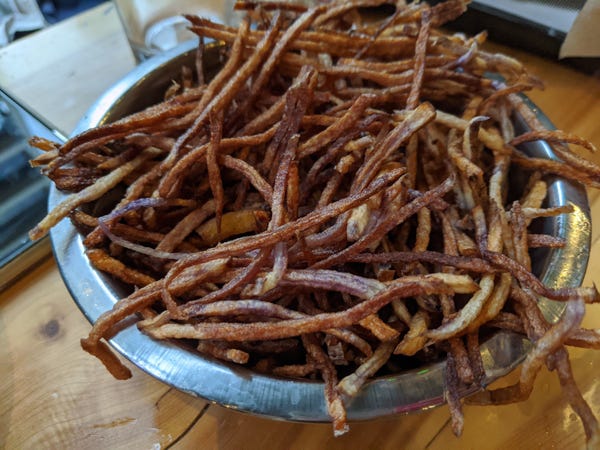 This one wasn't for me, and I felt like I was eating crispy potato skins. You might like them, though, if you're big on potato skin.

The sweet potato fries were perfectly soft and chewy, but with a nice crunch. 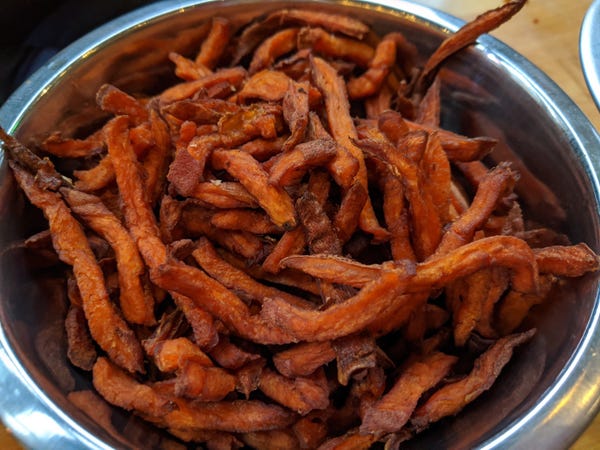 They were exactly what I want and expect of a sweet potato fry: sweet and delicious, and full of flavor. They were my favorite of the bunch until I tried the next dish.

At first, I found the yam fries tasted a little too starchy and plain-tasting, but upon further tasting, they became my No. 1. 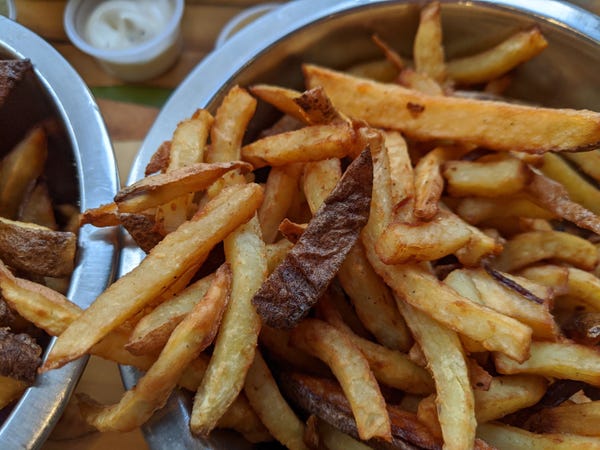 They initially reminded me of yuca fries and felt heavy, however, I found that I began liking them more and more and ended up eating most of the bowl, cementing them in first place for me.

In my very subjective opinion, especially considering that most potatoes had up to three cut options, the yam fries were in first place, followed by the sweet potato fries, russet homestyle fries, red po'balls, gold curly fries, and purple shoestring fries. 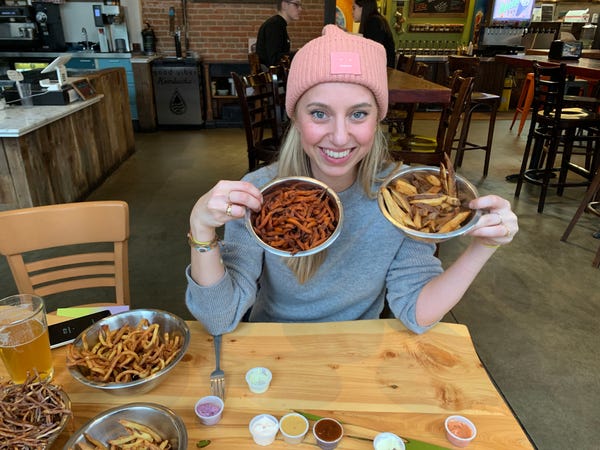 Again, next time I'd like to focus on the actual potatoes by ordering them all in one cut.

But halt! I also tried all the different sauces. 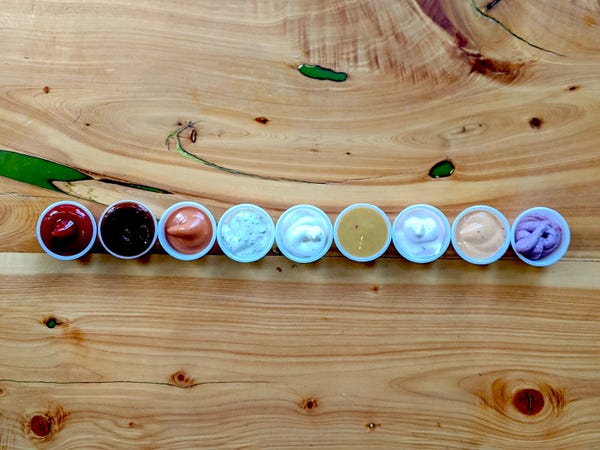 All the sauces are homemade — no Heinz ketchup here.

After trying them all twice, my favorites were the spicy roast jalapeño ranch, as well as the garlic aioli, which was thick and lush, and intensely garlicky but without giving you bad breath or a lingering after-taste.

Both ketchups were a little vinegary for me, the sweet mustard belongs on a pretzel, in my opinion, and the sour Thai didn't taste like much.

The chipotle was spicy and smoky, and the fry sauce, another Idaho specialty, tasted like ketchup sprinkled with curry powder. Good, but not for me. I also did not care for the blueberry ketchup which was very sweet, and had a thick and chunky consistency that was almost more like cream cheese than a sauce.

In general, the fries were tasty, but I would have liked them to come out a little bit hotter. They were a little lukewarm, in my opinion. 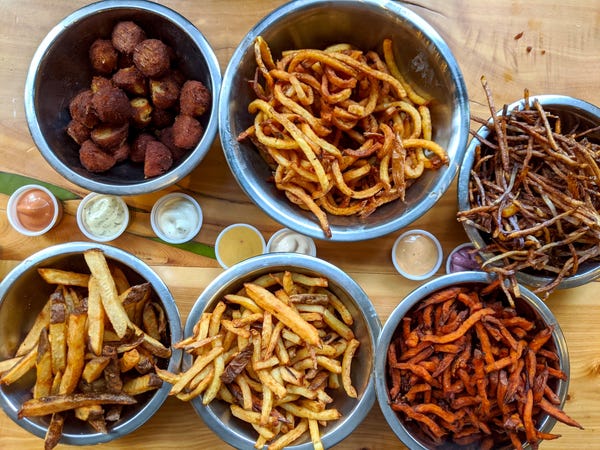 I also felt like the fries could have used salt, but I guess that's what the wall of seasoning was for. Upon further research, I found on their website that they leave fries "unsalted so customers can choose." However, I couldn't see this mentioned on the menu, and wasn't made aware of it when ordering.

I love fries (who doesn't?) and really enjoyed the fact that there were so many variations to choose from, though that comes with a small caveat. 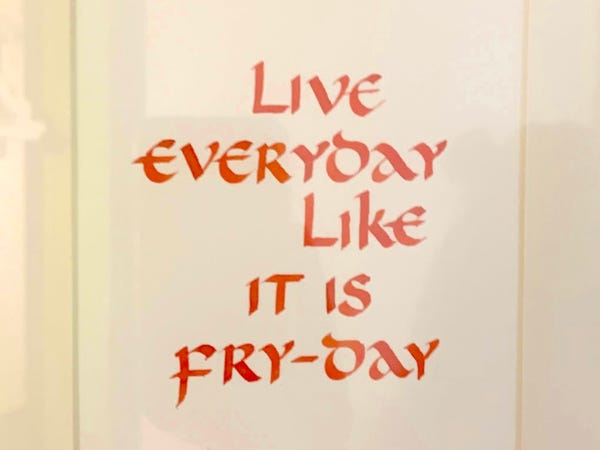 It's really on you to customize your fries and make them what you want, so there may be some trial and error. Better to go in seeing what you're served as a blank slate in need of some work than a finished dish, which can be intimidating to some.

Personally, I would have also liked a few tried-and-true pre-mixed options to choose from.

This story is part of our Next Stop series, in which Insider visits the 10 hottest US destinations for 2020. Click here to read more and see all the places we're exploring.