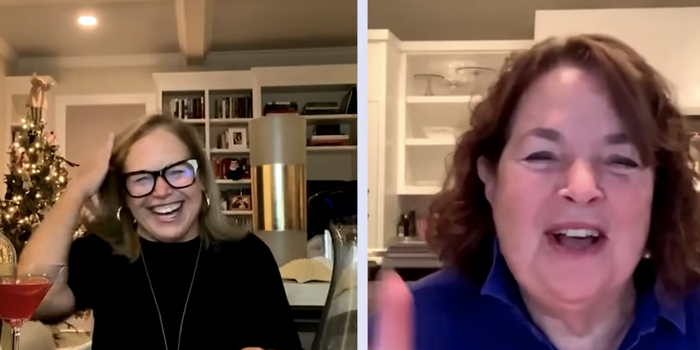 With the couple's 52nd wedding anniversary less than a week away, Garten showered nothing but praise on her husband during Katie Couric's Instagram Live series "Happy Hour-ish" last week.

Garten, 72, told Couric that she and Jeffrey constantly send affectionate texts to each other — but a recent message went hilariously awry.

"He texts me all the time, " Garten told Couric, adding that texting helps keep the couple connected when they're in different places because of their successful careers.

"We had this funny thing. He sent me a text but unfortunately it went to some woman in California. It wasn't a sext, but it was close," she added.

Garten, who released "Modern Comfort Food: A Barefoot Contessa Cookbook" in October, said that Jeffrey quickly apologized to the woman, who was a business acquaintance, after discovering his accidental text.

But Garten poked fun at the mix-up and joked that that the woman may have been a bit envious of the texts.

"So she, a little jealous I think, showed it to her husband and said, 'Look at the text that Jeffrey sends to his wife.' And he goes, 'Oh nobody sends those texts to their wives. That was for his girlfriend but he was embarrassed to tell you that,' Garten said, laughing along with Couric.

During the 55-minute interview, Garten also shared the 'surprisingly simple' secret to keeping their marriage alive

"That each person feels that they're the most important thing in the world to the other person. Jeffrey could be in China or Peru […] but if anything happens with me, I know he'll drop everything and come home immediately," Garten told Couric.

Garten has previously spoken about how Jeffrey's unwavering support inspired her to start her influential business, Barefoot Contessa, a specialty food shop in East Hampton.

In 1978, Garten worked on nuclear energy policies for the White House, but had dreams of working in the culinary world instead. Garten quit her Washington, D.C. position just after she turned 30, and the rest is history.

"Jeffrey said, 'If you love it, you'll be really good at it and that's the best advice anybody ever gave me,' Garten told New York Times' Sam Sifton during their October virtual chat.

You can check out Couric's full interview with Garten in the video below: