Now that Eat Out to Help Out is over, don’t forget that there are still some amazing restaurants offering fresh food straight to your door.

With a 10pm curfew for bars and pubs already in place in the North East and a two-week second lockdown potentially looming for the rest of the UK, it could soon be time to hunker down and rely on the restaurants we all craved the first time around.

From burgers and middle eastern meze platters to gourmet haute-cuisine, being at home doesn’t mean you have to forego the eclectic options of eating out.

Honest Burgers is now delivering from all its premises, including Bristol, Manchester and Liverpool. To celebrate, it’s brought back a few one-off specials, which change weekly.

Expect the likes of the Honest chicken burger or the chimichurri (Honest beef, chorizo, manchego cheese, home-made chimichurri and chipotle mayo) alongside classic menu items. All with rosemary fries, natch.

A taste of Italy

Renowned Edinburgh restaurant and deli Contini is letting customers experience its delicious dishes in their own living rooms. You can make it a more formal affair with a three-course meal for £24pp (including the likes of fresh mozzarella di bufala from Campagnia, chicken Milanese with Amalfi lemon, and tiramisu), or graze on platters of charcuterie, cheeses or arancini. The online larder stocks plenty of pasta, sauces, Italian coffee, wine and more.

Middle Eastern food specialist Arabica has launched a new menu, including meze and vegan meals, for delivery to your door. You could have a feast on your magic (living room) carpet piled with fattoush, chicken, moussaka, and pistachio kibeh, feta and spinach boregi, finished off with baklava and Turkish delight.

London chef Adam Handling recently launched his delivery service Hame in the capital and it’s proved so successful he’s taking it nationwide. The menu features some of his best-loved recipes from his restaurants The Frog Hoxton, Frog By Adam Handling and Adam Handling Chelsea, and a few developed while cooking at home during lockdown. 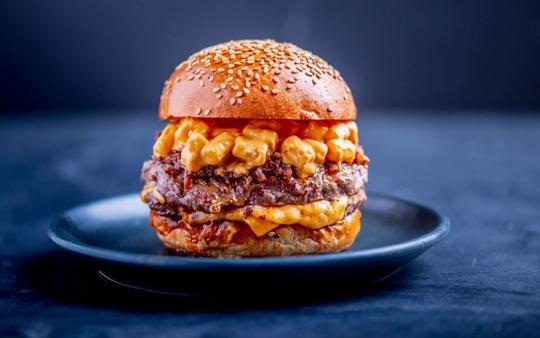 London and Oxford’s Dirty Bones is delivering DIY boxes nationwide, equipped with all the ingredients and instructions needed to make it feel like you’re tasting it fresh from their kitchen.

Options include meat and vegan burger kits (£30) with enough indulgence to station you straight on the sofa afterwards. Add in a lamb fries kit (£15) or wash it all down with a set of three different cocktails for up to four people, for £40. 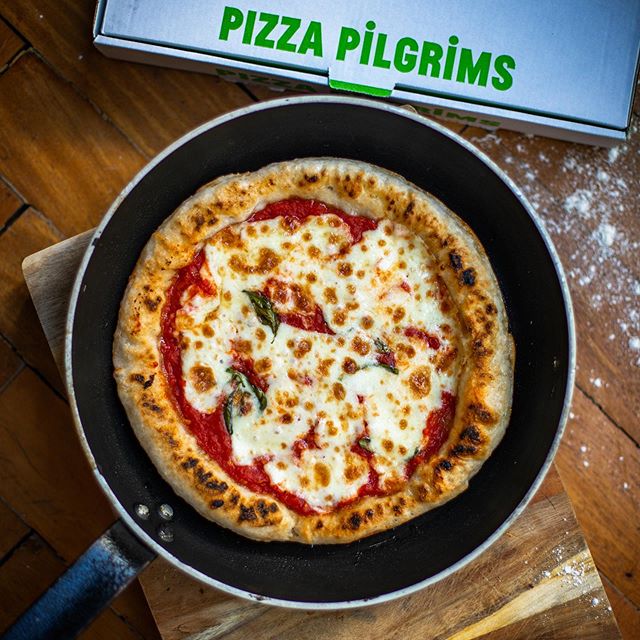 Two options here for Pizza Pilgrim lovers. Order a kit to make two frying-pan Margherita or Nduja (or combo) pizzas (from £15). It includes essential pre-made marinara, Parmesan, basil and the like, sourced directly from Naples.

Or, for those who live in London and want a little less fuss, simply order classic menu items via Deliveroo. As they say, “In Crust we Trust”.

Delivery: Within a few mile radius of HQ in Old Spitalfields Market via Deliveroo.

Dumpling Shack have a menu full of fresh handmade, authentic Chinese dumplings, wonton and noodles available on Deliveroo, from its Spitalfields base. Grab a selection of items, opt for one of the two meal deals or stock up on pantry items like Mala Chilli Oil. Perfect for those craving good Chinese cuisine.

From Bombay to home

London-based Bombay comfort food connoisseur Dishoom is offering its services on Deliveroo, specifically, it says, those that cope well with more travel. This includes Biryanis, Ruby Murrays and House Black Daal among other options.

Alternatively, the chain launched its first ever DIY kit (£16) for customers to make bacon naan rolls and chai tea while staying home. With every kit the restaurant donates a meal to Magic Breakfast charity, who provide free meals to schools.

All scream for ice-cream

Delivery: Thursday to Sunday 3pm-4pm, to all London postcodes. Slots for next day delivery close at 3pm. Pre-order pick up available Wednesday to Sunday.

Don’t forget to end on something sweet. The Soho gelateria is offering delivery or pick up for its fresh gelato, made to order less than a day before delivery.

Don’t forget the booze… on wheels

The Forest Road Brewing Company has created its very own pint-mobile to deliver ice-cold draught beer door-to-door to punters. Stocked with three of its own brews — Posh Lager, Work IPA and Easy Pale Ale — it is currently delivering within a three-mile radius of London E8.

Bacardi has teamed up with Deliveroo Editions to bring cocktails from your favourite bars to your front room. The Cocktails At Home virtual bar gives you the chance to support local bars in London and Manchester, with signature drinks from the likes of Callooh Callay, Artesian, Mr Fogg’s and Grind.

Drinks brand Funkin has just launched a Funkin House Party Pack, which includes 12 cans of nitrogen-infused cocktails (to provide that ultimate, barman-shaken feel) for £24. Those who buy in will get four each of Passion Fruit Martinis, Espresso Martinis and Pina Coladas.

Get in touch by emailing metrolifestyleteam@metro.co.uk.

MORE: How to make a Pumpkin Spice Latte at home

MORE: London Cocktail Week is back for an entire month with £6 cocktails across the capital