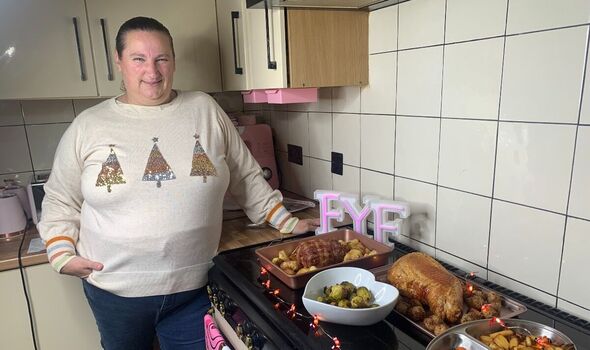 Despite rising food costs, Lorna Cooper from Paisley has revealed how she can feed her family of eight for less than £6 each. This includes all the trimmings, as well as enough leftovers to last for days after Christmas.

Lorna said that Christmas is her favourite time of year and she wanted to show others that it is possible to enjoy the seasonal festivities without breaking the bank.

To keep costs low, Lorna used a turkey hamper from online healthy food retailer MuscleFood, costing just £45. There was enough food left over from the hamper to make a turkey and leek pie.

Lorna has cooked Christmas dinner in this way the last two Christmases. She shared her top tips with others, saying: “After the last couple of years, it’s more important who’s around the table than what’s on it.

“Christmas is a big tradition in our home, on Christmas Eve we all help out to prepare the food for the next day and then in the evening we sit by the fire with a cup of hot chocolate.

“My kids get involved in peeling the veggies and wrapping bacon around the sausages which we use from the MuscleFood hamper.”

The savvy mum continued: “The daily price changes are mental – they seem to be rising every week and not just by a few pence. Even the own branded supermarket items are going up.

“As hard as it is, managing your Christmas budget means being realistic about what you need in the run-up, so if there’s anything reduced on the shelf, freeze it and use it for the meal.

“If I know most people coming over don’t like Brussels sprouts, I simply won’t cook them as it’ll be a waste of money.

“When family come over, there’s nothing wrong with asking them to bring a dish to the meal, as it can be quite expensive trying to feed everyone at the table.

“Snacks can also drive the prices up – parents need to be savvy and hide the snacks from the kids and also from yourself.”

She said: “Instead of spending £12 on a yule log, get two cheap Swiss rolls and cover them in chocolate buttercream to save £10 on ingredients, and get the kids involved as a cheap family activity.

“I made a family-sized portion of pigs in blankets which we used as part of the dinner, but there were so many leftovers, we decided to leave some for the day after and then freeze any extra portions.”

On Boxing Day, Lorna said she likes to use the leftovers from the Christmas dinner and make them into meals for the rest of the week.

She explained: “If we have leftovers such as chicken, I make it into chicken fried rice and freeze it for the week.

“But I also love to make a pie so if I’m using a turkey, I’ll make a turkey and leek pie.”

Lorna went on to explain how best to freeze turkey, in order for it to last longer. She said: “A tip for freezing turkey is to make use of the carcass – boil it in the slow cooker with the bones, skin and in water, then add the veggie peelings and cook overnight.

“Strain it and keep the stock – the first lot can make a delicious soup and the second or third time you get turkey stock to use for gravy.”

“Another fun budget idea to get the kids involved is to make homemade reindeer food which consists of edible glitter, oats and then mixed in a bag with marshmallows.

“You can even make your own DIY toffee vodka – simply pop toffee into the vodka, leave it to sit for a week and then shake it before the party begins.”