Once you get past the fact that a reporter flown to London to interview Adele hadn’t listened to her new album (and that he admitted it to her), the most remarkable thing about Seven’s bungle over its package with the English singer is that it reportedly paid $1 million for it.

A million bucks for a package headlined by a tell-nought sit-down interview with Oprah Winfrey, plus a mini-concert, is a lot of money. Even with the sweetener of a 30-minute interview between Adele and reporter Matt Doran (who said he hadn’t seen the email containing the album), it’s a chunk of change, especially when her label Sony prevented the interview from going to air. 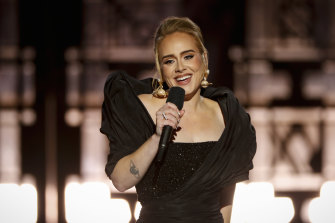 Adele: One Night Only was a tightly managed package, and an extreme example of the dynamic often seen in entertainment “journalism” these days.Credit:Cliff Lipson

How, you might ask, did it come to this, where a news organisation pays for access to talent already on the promotional trail? Where that organisation cedes editorial control to the label/publisher/studio that stands to benefit most from the interview being published or broadcast? And where that price tag doesn’t even guarantee the right to actually air the resulting puff piece?

The answer is we got there via a thousand cuts, incremental concessions that have contributed to, and reinforced, the idea that mainstream media is often little more than another marketing arm of the global entertainment industry.

Interview offers frequently come with terms and conditions designed to ensure the almost total lack of newsworthiness of the resulting story: no personal questions; controversial past statements/behaviour/incidents are off-limits; ask only about the album/TV show/book/movie in question, no matter how dull it may be.

Agreeing to these conditions isn’t compulsory (though you might lose the interview) or necessarily binding (journalists will often sneak in the prickly questions towards the end) but they do tend to set the tone for the discussion.

I once had to send a long list of questions ahead of time (a not uncommon request) and agree to ask about a diet formula she was promoting before being granted access to Kim Kardashian. Neither she nor her team looked at those questions before the interview began, but when I asked her about the lawsuit being brought against her over claims of false advertising associated with the diet formula they were all ears and flapping arms as they tried to shut it down. 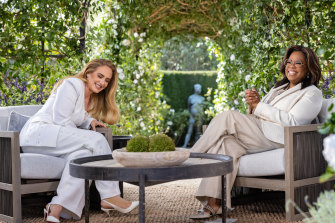 “A double whammy”: Adele’s interview with Oprah Winfrey was a meeting of A-listers rather than reveaaling Q and A. Credit:Joe Pugliese/CBS

It is rare for money to change hands for a celebrity interview, but then this is not the standard offer. “Adele is an enormous superstar – and Oprah Winfrey is too,” says celebrity agent Max Markson. “It’s a double whammy.”

In some ways, he says, there’s nothing unusual about Seven paying $1 million (if that is what they actually paid) for the package. “The two-hour prime time interview with Oprah is what they paid for,” he says. “A million in the course of their year’s budget, so what? They’ll get some shows cheap and some expensive.”

Despite assigning a former crime reporter the job of flying across the world to interview the singer, it makes more sense, Markson argues, to see this offering alongside the likes of Dancing with the Stars or Big Brother. “There’s a distinction between what’s news and what’s entertainment, and this is right in the entertainment space.”

As for Sony refusing to release the footage, that could be down to two things: either a risk of legal action for breach of the contract signed by Seven, or the fact that Seven’s crew didn’t actually film the interview.

I have occasionally done filmed movie-related interviews where the studio provides the crew, and afterwards gives the journalist or media outlet a SIM card, USB or some other device containing the footage. There are legitimate reasons for it – they can ensure the lighting and camera angles are optimal and can churn through many more interviews with only one camera crew set-up – but not being in control of the footage is far from ideal, as Seven has discovered.

Occasionally, a publicist might “suggest” that a particular story ought to be written by a writer who they think might be “sympathetic” to a subject, and to blacklist others they fear won’t be.

Ultimately, these restrictions and demands come down to the same thing, control. And agreeing to or rejecting them is a matter of who needs it more, the artist or the outlet (a dynamic that can shift enormously, and in more than one direction, over the course of an artist’s career).

With the proliferation of media channels and the ability of artists to speak directly to their fans, the media no longer plays the central role it once did. It is now reduced to fighting for scraps – the 12-minute interview, via Zoom but without the camera on; the round-table with a bunch of other journalists from around the world all getting the same answers; the Q&A via email – in order to satisfy its insatiable appetite for content. This masthead is not immune from it. None of us are.

It’s so rare for a tightly controlled interview to yield anything of actual interest that the media would be better off to collectively just say no. But no outlet will do that lest it gives its rivals a competitive advantage. Unless, perhaps, we could get everyone to sign a binding contract…