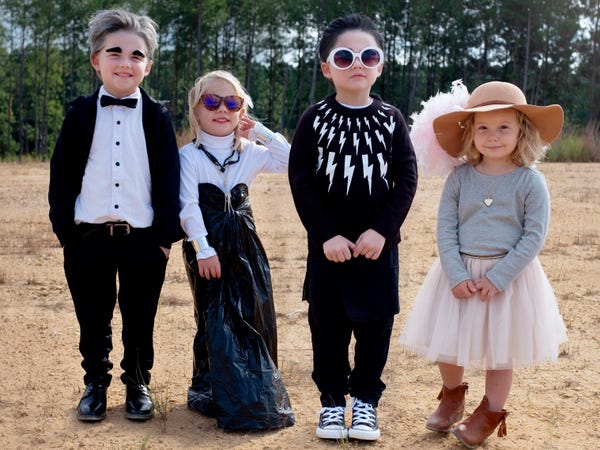 As if taking care of three toddlers and working full-time during a pandemic wasn't time-consuming enough, Lauren Mancke has been hard at work producing some of October's most viral photos.

The 35-year-old mom of three from Columbia, South Carolina, is making a new set of elaborate Halloween costumes for her kids every day this month and sharing pictures to her more than 20,000 Instagram followers with the hashtag #manckemonthofcostumes.

The most popular picture she's posted so far this year is her three kids — 6-year-old Fox (pictured twice) and her 3-year-old twins Marigold and Lera — dressed as the Rose family from "Schitt's Creek." The post has earned over 28,000 likes and resulted in Mancke's largest boost in social media followers since she started the annual tradition in 2015.

Ew, David, we like won all of them. 😁🤣 An unbelievable and well deserved sweep of the Emmys last night for one of our favorite shows, “Schitt’s Creek”. Such talent! This also happens to be a sneak peek of our month long costume craziness. When I thought maybe we shouldn’t do #manckemonthofcostumes this year, I just kept thinking, but we just have to do @schittscreek. As Moira would say and with the vigor of a wartime radio operator, the show must go on! Be sure to follow along for DIY costumes every day in October using @primarydotcom clothing. . . . #yestoprimary #SchittsCreek #emmys #emmys2020 #DanLevy #EugeneLevy #CatherineOHara #AnnieMurphy #DavidRose #JohnnyRose #MoiraRose #AlexisRose #primarydotcom #halloweencostumes #schittscreekmemes #primaryhalloween2020

"It's one of my favorite shows and so I wanted to lead with that one," Mancke told Insider. "You know, they got all the Emmy wins [and I wanted to] congratulate them. I really wasn't expecting everyone to love it so much, but I think they love the show so much, and I feel like kids really unknowingly nailed the poses of the characters."

Mancke, who has always loved Halloween, started making costumes for her kids in 2015

Mancke said that she's always made costumes for herself and friends; she saw motherhood as an opportunity to continue her crafty hobby. In 2015, when Fox was 14 months old, she started dressing him in simple homemade costumes like a striped shirt and overalls for "Dennis the Menace" and the hobby quickly snowballed.

She took a year off in 2016 while pregnant with her twins but, in 2017, "once the twins were born everyone was like 'Are you gonna do the costumes? You gotta do the costumes, what's better than one baby? Two babies!' So we did it again that year and People magazine picked it up."

Mancke said she's come up with the costumes for older movies and shows, like "Wayne's World" and "Friends," but her children share ideas too.

Party Time, Excellent! We’ve done so many #manckemonthofcostumes that I think I’m gonna hurl! Jk! 🤣 We had to bring back an old classic for today’s post because these two make the perfect Wayne and Garth from Wayne’s World. I’d definitely watch this public-access show. We’re not worthy! . . #waynesworld #waynecampbell #garthalgar #kidscostumes #partytimeexcellent #snl #primarydotcom #primaryhalloween2020

On average, the costumes take half a day to put together, but some of the more detail-oriented costumes can take much longer — this year's "The Mandalorian" costume took a week. Mancke said she normally works on a costume in the morning, shoots the photos in the afternoon, and posts them to Instagram the following morning.

The process also depends on how quickly she can get her kids dressed and camera ready.

"It's three toddlers so you can imagine how a photo shoot goes," Mancke told Insider. "But they're used to taking a picture, so they all relatively get in line and say cheese and do a little pose and they all hold them."

After doing so many shoots, Mancke's kids have developed their own styles and poses, which she says helps bring the characters to life.

Mancke says the whole point of the series is to have fun with her children, but she also hopes the photos bring strangers joy, too

This year it carried an extra meaning — Mancke lost two grandmothers, one to the coronavirus and the second to other causes. With the coronavirus negatively impacting so many people and derailing much of 2020 (including Halloween in some areas), she hoped this year's costumes would give her followers something positive to focus on.

"This year kind of sucked. We're hoping to bring some joy to people, make people smile," she told Insider.

Ladies and gentlemen, it’s the starting lineup for the Tune Squad. At small-forward, Lola Bunny and the point guard, standing 3ft 3”, 4ft if you include the ears, the Doctor of Delight: Bugs Bunny! Marvin the Martian is refereeing today’s game in this Space Jam inspired #manckemonthofcostumes. 🏀 I really always wanted to be Marvin the Martian. If you have time to kill today, go look at spacejam.com. #spacejam #looneytunes #bugsbunny #marvinthemartian #kidscostumes #diycostume #90scostume #halloween2020 #primaryhalloween2020

Even though traditional trick-or-treating is up in the air near where Mancke lives, it's no doubt that her kids have their choice of some of the best Halloween costumes in town. Right now they're pulling for "The Mandalorian," but that could all change once she makes another popular set of costumes for the kids.

"Right now, as of 10 days out, they all want to go as ["The Mandalorian"] but you know how kids, they change their mind and I haven't done the 'Frozen' costume yet so I'm pretty sure the girls might want to switch to 'Frozen' once they see that one."