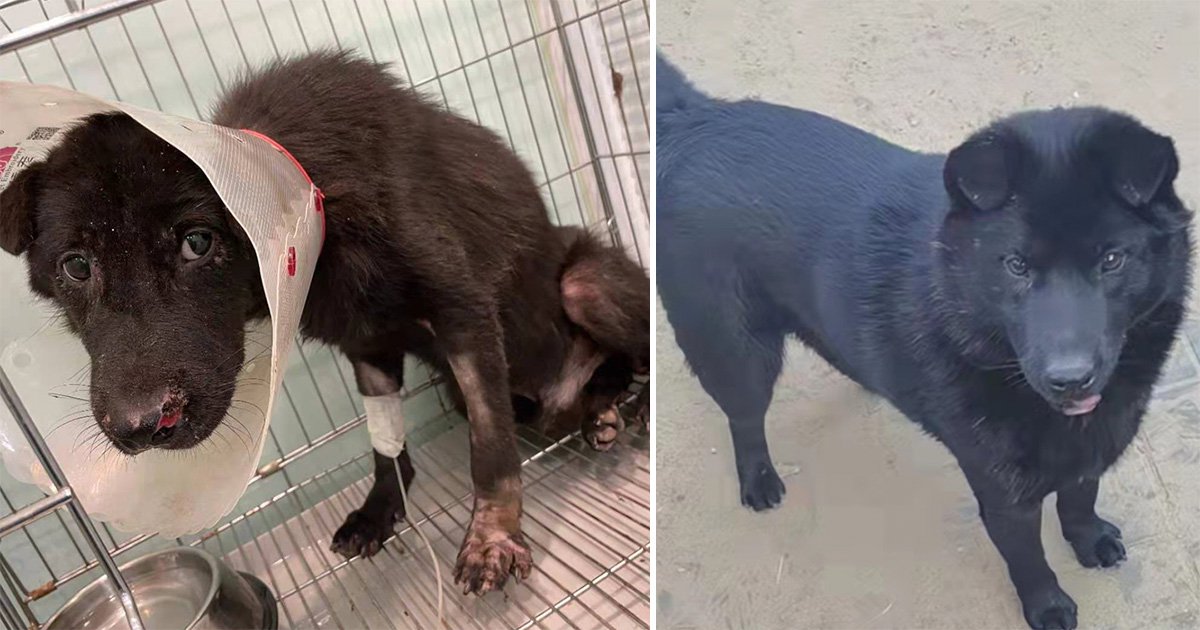 Cain had a rough start to life, but is now looking for a kind new owner – who can show him the love he deserves.

He is one of the lucky few dogs rescued from the Yulin Dog Meat Festival, in China, last summer.

Charity NoToDogMeat was able to negotiate his release from a butcher – along with 20 other dogs – but Cain was in quite a bad way.

Thankfully, the NoToDogMeat team have nursed him back to health, and the pooch is now looking for a forever home.

NoToDogMeat’s CEO Julia de Cadenet told the DailyMail: ‘We have no idea where he came from, but from the deep sadness in his eyes, it was clear he has been suffering for a long time.

‘The butchers were so arrogant and uncaring.’

According to Julia, most of the dogs were ‘lethargic and weak’ and made little eye contact with the volunteers. She also stresses how difficult it was to pick which ones to save.

Speaking about the condition they were found in, Julia adds: ‘Outside they [the butchers] had a stall promoting dog meat, it was one of the few remaining places now still killing dogs just a few metres away from the stall.

‘The dogs were kept in a bare holding pen with no light, food or water and they were being dragged out one by one, killed and immediately blowtorched, the dead beside the barely living.’

Many of the dogs were also thought to be stolen pets, as they were still wearing collars.

After his rescue, Cain then faced another blow, as his health deteriorated in December – leaving him fighting for his life.

But thanks to the veterinary team, he is now doing well and is hoping for a new home in 2022.

Julia adds: ‘We are continually amazed by the fighting spirit of these wonderful animals, and they all deserve the very best care and support.’

The work of international organisations – such as NoToDogMeat as well as Chinese organisations and activists – means progress has been made in working towards an end to the brutal dog meat trade.

Last month, two illegal dog slaughterhouses in a northern province of China were permanently shut down after local activists collaborated with authorities.

For more information on rescue and adoption visit: notodogmeat.com