Warning: This story contains the name and images of a deceased Indigenous person. David Dalaithngu’s image has been reproduced with his family’s consent. His family has requested he be referred to as Dalaithngu rather than his more commonly-known name.

A riveting presence on screen. A rock star without a band. A national treasure. 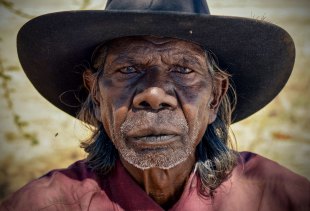 The great Indigenous actor David Dalaithngu, who has died at the age of 68, is being remembered as a trailblazer for other Indigenous actors and filmmakers as well as a compelling talent on screen for more than 50 years.

The star of films including Storm Boy, Crocodile Dundee, Rabbit Proof Fence, The Tracker, Australia and Charlie’s Country went from a largely tribal childhood in Arnhem Land to international acclaim after British director Nicolas Roeg cast him in the 1971 film Walkabout.

A Yolngu man of the Mandjalpingu clan who was also a dancer, singer and painter, Dalaithngu’s acting has brought acclaim and awards ever since.

“I don’t pretend,” he said of his performances in this year’s documentary My Name Is Gulpilil. “I don’t have to go and act. I just jump in and stand there and the camera sees me.”

After being given six months to live when diagnosed with lung cancer in 2017, Dalaithngu lasted another four years during treatment with “white fellas’ medicine” near Adelaide. 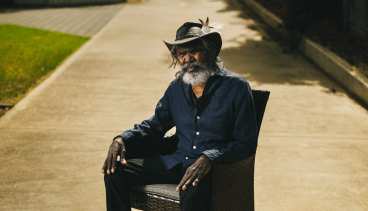 David Dalaithngu recounted a life of extremes in Molly Reynold’s documentary My Name Is Gulpilil.Credit:Miles Rowland and Bing Rowland.

At one of his final public appearances for the Adelaide Festival premiere of My Name Is Gulpilil in March, an audience of 1500 gave him a minute-long standing ovation when he arrived on stage in a wheelchair looking frail. He rose to his feet and, in an unscheduled speech, told them: “Today I will think of you and you will think of me”.

“He was the most enigmatic legend, just an empowering person,” he said. “Whether he was walking in the room or standing in front of a camera he just took control of everything; he owned it.

“He was a really genuine human being, who struggled in life and made the best of it.”

Thornton described Dalaithngu as “a leader” for being one of the first Indigenous people on screen in the 1970s.

“For us to play ourselves, to be acknowledged that we are part of this country, was so empowering, because before that it was just kookaburras and didgeridoos,” he said. “His legacy will live on. The body may die but the spirit never will.”

“When you cast him, he brings a whole history of not only film culture but the Country to the role,” he said. “That’s the thing about film: it’s immortality, so his presence will continue and he’ll continue to shape this country through the work he’s done.”

Sen said part of Dalaithngu’s rich talent was how he could communicate non-verbally on screen.

“He didn’t have to actually say things,” he said. “He communicated with his eyes. There are a few roles where he wasn’t given much weight by the scriptwriter but he delivered that weight by his visual and physical presence.”

Sen, whose other films include Beneath Clouds and Mystery Road, said seeing Dalaithngu in Storm Boy was inspiring for an Indigenous kid.

Writer, director and actor Leah Purcell, who has been winning acclaim for the film The Drover’s Wife The Legend Of Molly Johnson, said she learnt subtlety from Dalaithngu.

“It wasn’t until I watched [him] that you go ‘that’s acting’,” she said. “There will never be another David … his intelligence, his knowing, his cheekiness.” 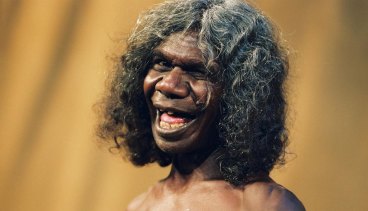 “Whether he was walking in the room or standing in front of a camera he just took control of everything”: David Dalaithngu.Credit:Heidrun Lohr

There were tributes from non-Indigenous filmmakers including Baz Luhrmann, who called him “a unique person and a unique Australian”, and Phillip Noyce, who called him “the world’s most prominent embodiment of Australian Aboriginal culture for 50 years” and a “national treasure”.

Director Rolf de Heer, who collaborated with Dalaithngu on Ten Canoes, The Tracker and Charlie’s Country, called him a genuinely great actor with an “uncanny ability to engage with the camera and treat it like a friend”.

Olympic track star Cathy Freeman tweeted “Thank you for the inspiration”. Nicole Kidman, who starred with him in Australia, called his death “deeply, deeply sad” and said it was “an honour to know him and to work with him”. Co-star Hugh Jackman posted that he joined Australians around the world in mourning the loss of a man whose “contribution to film was immeasurable”.

Knowing the end was near, de Heer and partner Molly Reynolds, who directed My Name Is Gulpilil, pledged to return him to his beloved Country, Gulparil in Arnhem Land.