The ABC announced the planned redundancies on Wednesday as part of the digitisation of much of its audio and video collection and the rollout of systems that reporters and producers would use to source their own archival material. 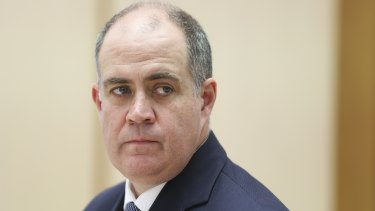 “We don’t believe it will compromise our ability to tell local stories … we value our archives,” Anderson told media after attending an event at Parliament House on Thursday.

“It is a change that we’re putting in place that is transformational for the future.”

The ABC, which last year converted about 90 per cent of its audio content and 35 per cent of its videotape collection to digital files, said technology meant content could be collected, managed and reused more efficiently and as a result, some roles were no longer needed.

It is proposing to remove about 58 roles and introduce 30 new ones and says the final number of redundancies will be determined after consultation.

“The ABC has developed this proposal before it has even consulted with program makers about what they need from the ABC archives in order to do their work,” Ealy said. “This proposal is tech-driven not content-driven, which is highly problematic when it does not have a realistic take on where the organisation is at presently.”

Under the Archives Act, the ABC transfers its recordings to the National Archives, the agency charged with preserving Australian history. Anderson said the redundancies would not jeopardise the broadcaster’s obligations under the law.

Asked how viewers and listeners would respond to the decision, Anderson said the ABC was “always there for all Australians”.

“Telling stories is what we do and this is an initiative that we’ve thought through carefully and, again, we’ve announced that we’re in consultation. We’ll take feedback from people, answer people’s concerns that they might have through this period of time,” he said.

The organisation said that, under its enterprise agreement, staff were last month given the opportunity to volunteer for redundancies and could do so until the middle of June.