It is important to remember, in politics, that authority is always a kind of magic spell: a fiction, in which everyone more or less agrees to act as though somebody has power, or doesn’t.

In the recent multiple ministries brouhaha many commentators reminded us of the literal truth of this – the fact “prime minister” is mentioned nowhere in the constitution – but mostly it is a matter of perceptions. And so one of the most interesting facets of the first 100 days of the Albanese government (107, to be precise) has been this transformation in perceptions. 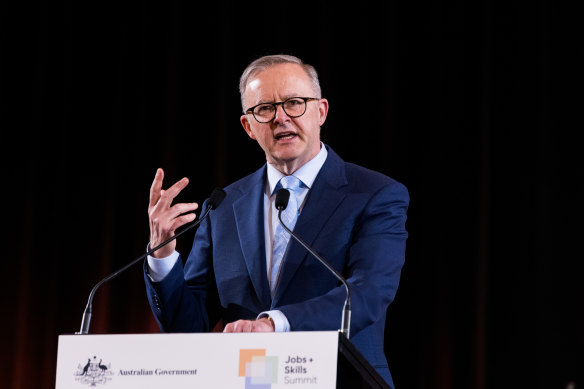 Immediately after the election, the focus seemed less on Labor’s victory than on its declining primary vote, as though this rendered Anthony Albanese somehow less powerful. A combination of factors – time, a majority in the parliament, and Labor’s confident performance since – has shifted this. So the most significant result of last week’s jobs and skills summit might be the way it both illustrated this shift and cemented it.

It is clear already that consensus was not quite as happy as it appeared just a few days ago. Various business figures have been keen to make clear they are not very keen at all on multi-employer bargaining lest anybody make that mistake based on the deals that were able to be done at the Summit.

John Kehoe in the Australian Financial Review reported that business leaders have plenty of disagreements with the government, but chose mostly to speak (publicly) on the areas where there was agreement. They did so for the same reason the BCA and the Council of Small Business Organisations very publicly reached agreement on certain matters with unions despite reservations: everyone wants to look like they are working in concert with the government. 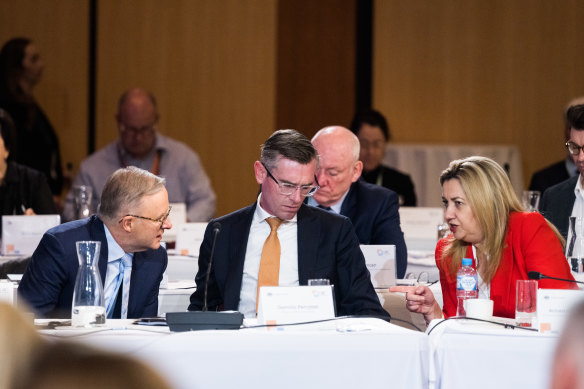 Long-time readers will already know one of my favourite political quotations, passed down through Labor figures and best put by Laurie Oakes: “You get power by exercising it.” That is because, by acting as though you have authority, you burnish the fiction: you give others reason to keep on believing what they already believe.

The truth of the summit was that Albanese already had “the numbers in the parliament”, as one business leader told Kehoe.

Albanese didn’t need business, nor unions, nor any type of consensus – he could have exercised his power in the parliament, which in turn would have bolstered his authority. But Albanese is up to something more complex. The way he is using that power is by seeming to give it away, knowing that the others involved have a stark choice: work with him, and look as though they share in that power, or decline the choice, and look powerless. Of course, they chose the first. The result is that Albanese looks more powerful too. He isn’t really – his numbers in the parliament are what they were – but at the same time he is. Fictions are powerful and complicated things.

The other notable fact about the summit was its acknowledgement of crisis. The pithiest description of Australia’s current state came from Danielle Wood, of the Grattan Institute, who in her keynote address said our economy “like all of us, looks increasingly older, fatter, and slower”.

At a significant meeting of leaders of a nation that thinks of itself as both clever and fair, she called out the “poor policy design” we have suffered, not unrelated to the destructive power of lobbying, which hurts not only integrity but economic success. Wood drew together topics that are too often treated separately: the way that house prices and the decline of our social safety net also harm the capacity of our young people for risk-taking.

Ross Garnaut, having declared in his speech several times that we must “stop kidding ourselves” – about our economy, taxes, inequality, climate and the budget – said, “the realities facing Australia are much more dangerous than revealed to the electorate in May this year.”

Which is mostly the politicians’ fault, but not only. Journalist Paul Karp made the point last week that Labor’s announcement of a set of significant IR policies so soon after the election shines a damning light on the focus of much of the press pack during the campaign.

After all, multi-employer bargaining was mentioned in the party’s policy platform, but was largely ignored by journalists in favour of quizzes and trivialities. But the point goes beyond this specific policy. Our national debate ignored many complex developing crises, in May and in the years before, in favour of problems with solutions that could be easily summarised – like a single government submission on wages, say, or tax cuts.

Not that we have entirely rid ourselves of this habit. Pressure is building on the government – slowly – to scrap the stage 3 tax cuts. They should be scrapped, as I have written before. But it is also worth noting that they seem, increasingly, to have become a placeholder for all the more complicated problems the government is facing. Because the money that would be saved could be spent on X or Y, as long as the tax cuts remain, there is the potential that X or Y might soon be dealt with. Or, to put this another way, they have become a repository for the hope that was invested by some in Labor before the election; the expression of the desire that Labor will eventually deliver everything dreamed of.

Hope, that beautiful thing, is also a danger for progressive governments. This iteration of Labor is well aware of that, and has always limited both its rhetoric and its promises. But in politics, it is always, eventually, your strengths that become your weaknesses.

This is why political failure is so hard to guard against because it always comes from the direction you least expect, the fatal blow delivered by the thing you thought would save you. And so, it is possible that the greatest danger to Albanese’s government will end up being not the grandness or over-promising it worries about, but a kind of tinnyness – or tiny-ness – if it insists only on incrementalism in the face of our many massive difficulties.

This was the real message of the summit, if the government cared to hear it. And perhaps the government did hear it, and provided an answer of sorts. Albanese’s commitment to the Uluru Statement from the Heart has been the strongest sign he is prepared to be bold. Heading towards multi-employer bargaining, despite widespread opposition from business, is an early hint that this boldness may extend to economic matters. It will need to.

The Opinion newsletter is a weekly wrap of views that will challenge, champion and inform your own. Sign up here.