Almost one-third of adult Australians say they are unlikely to be vaccinated against COVID-19 in a new sign of concern over the nation’s troubled plan to shield most people from the coronavirus by the end of this year.

Doubts about vaccine side effects top the list of reasons for the alarming level of vaccine hesitancy, but a new survey also shows many people believe there is no rush to take a jab while the international borders are closed. 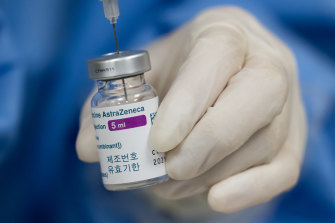 Close to a third of Australians surveyed are worried about getting the COVID-19 vaccine.Credit:Bloomberg

In the middle of a heated debate about when to open Australia’s borders, 15 per cent of adults surveyed said they were “not at all likely” and 14 per cent “not very likely” to be vaccinated in the months ahead.

Only 14 per cent of total respondents said they were “extremely likely” and 8 per cent “very likely” to take the jabs, with another 13 per cent “fairly likely” to do so.

The exclusive survey, an initiative of The Sydney Morning Herald and The Age with research company Resolve Strategic, found vaccine doubts were stronger than in Ipsos polls carried out in February and September, before an official ruling in April about blood clots linked to AstraZeneca doses for people under 50.

“The problem is partly the practical access to vaccines, partly a nervousness about side effects and partly a risk judgement about whether they need to be vaccinated given the low risk right now,” Resolve director Jim Reed said.

Prime Minister Scott Morrison has escalated his warnings about the global danger from COVID-19 but has not put a target on the vaccine rollout, a crucial milestone in the federal budget plan to open borders in the middle of next year.

Mr Morrison also admitted on Tuesday the government needed to “step up the performance” on vaccinating people in disability care, while the rollout to aged care homes is months behind schedule.

Voters are taking a cautious approach to the opening of international borders, too, amid a fierce debate about when to make the change.

Forty-four per cent of those surveyed in the latest Resolve Political Monitor said it was “about right” to open from the middle of next year, while another 33 per cent believed it was “too optimistic” and 14 per cent were unsure. Only 9 per cent believed the timetable was “too pessimistic” despite calls from state and business leaders for a clear road map.

The new signs of vaccine hesitancy highlight the challenge of achieving some sort of herd immunity to the coronavirus, with NSW Premier Gladys Berejiklian aiming to have 75 to 80 per cent of the population vaccinated before borders reopen.

“I’m keen to see our population vaccinated as soon as we can because that gives us freedom to have these conversations [about border controls] and exercise choice about what we do moving forward,” Ms Berejiklian said on Tuesday. “We can’t do that until we have the majority of our people vaccinated.”

Victorian Acting Premier James Merlino said progress depended on federal action on the vaccine rollout and quarantine, including Commonwealth funding for the new quarantine hub the state government has proposed for Melbourne’s north.

Mr Morrison has not set a target for the vaccine program but United States President Joe Biden this month said he wanted 70 per cent of adults to take at least one jab by July 4, while British Prime Minister Boris Johnson said he wanted all adults to be offered their first dose by the end of July.

When those who were hesitant about vaccines were asked why, 50 per cent said they were concerned about side effects.

The nation’s peak medical experts, in a group known as the Australian Technical Advisory Group on Immunisation, declared on April 8 that people under 50 should take the Pfizer vaccine due to the very small risk of blood clots from the AstraZeneca vaccine.

Respondents could nominate multiple reasons for not wanting a jab, with 21 per cent saying there was no rush when international travel was not allowed.

Only 4 per cent said they were opposed to all vaccinations, showing the doubts were broader than the “anti-vax” campaigns rejected by scientists.

As well, 14 per cent said there was not enough vaccine supply and they could afford to wait.