Happy Fishmas! We’ve had the festive three-bird roast… but are we really ready for the Waitrose’s three-FISH version on the shelves this Christmas?

First it was the turducken – a three-bird roast consisting of a chicken cooked inside a duck inside a turkey.

Now there is a pescatarian twist on this festive delicacy – as both Waitrose and Marks & Spencer offer a trio of fish as centrepieces for their Christmas menus.

Waitrose launched its version last week, with a dish that comprises a silver-skinned filleted side of salmon stuffed with boneless cod fillets and smoked haddock wrapped around baby spinach with lemon and dill butter.

Martyn Lee, executive chef at Waitrose, told The Mail on Sunday: ‘We wanted to create a beautiful centrepiece that would suit the growing number of our customers looking for a meat alternative who like to eat fish. 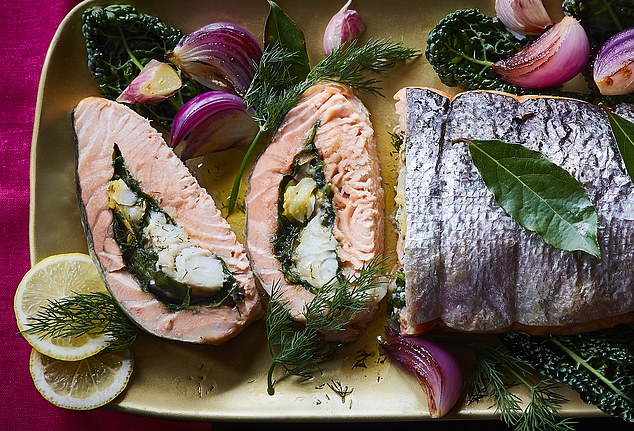 Waitrose launched its three-fish roast (pictured) ast week, with a dish that comprises a silver-skinned filleted side of salmon stuffed with boneless cod fillets and smoked haddock

‘The three-fish roast offers a stand-alone dish that will sit comfortably on the table alongside a traditional turkey or rib of beef.

‘The key is that this dish takes away the pressure of Christmas cooking. It has all been done and is easy to carve.’

Prices for both the Waitrose and M&S versions start at £30 and they are likely to attract growing numbers of people looking for alternatives to meat.

Celebrity TV chef Rosemary Shrager, currently mentoring comedian Johnny Vegas in ITV’s Cooking With The Stars, said: ‘I have never heard of a three-fish roast and have never made one. Stuffed fish, yes, but not three different fish.

‘I think it’s a really lovely idea. I’ve got two pescatarians for Christmas and I may make this myself.

‘I think I would use a salmon on the outside for its wonderful silvery skin and then put in some lemon sole and some prawns.’ 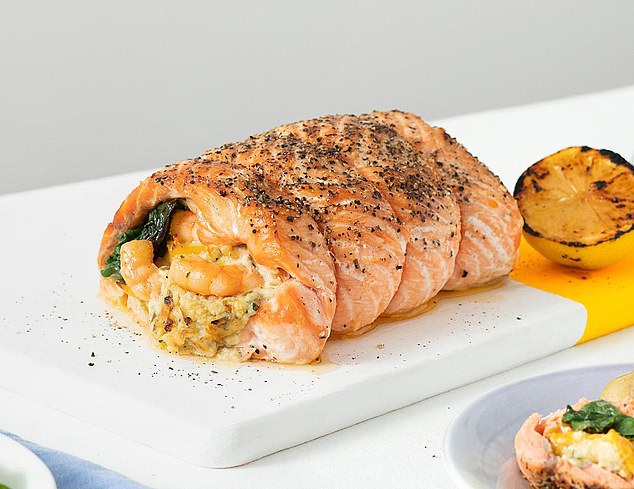 M&S launched its three-fish roast two years ago. It comprises a flaky salmon fillet, succulent king prawns and smoked haddock, and is stuffed with a rich cheddar cheese stuffing

She added: ‘It really is great what the supermarket chefs are coming up with.’

Waitrose chefs perfected their new dish in their own kitchens during lockdown and were initially trying to create an alternative to beef Wellington.

But Mr Lee said that concept was eventually ditched as the pastry used for the ‘Wellington’ became too wet in home ovens because of the moisture from the fish.

Outside the US, the turducken is popularly known as the three-bird roast, although a version called the gooducken is sometimes cooked in the UK with the turkey replaced with goose.

Food historian Ivan Day said there has never been a British tradition of using three fish in one dish.

He added: ‘The only dish I know about is from a manuscript recipe of 1699 for a pike stuffed with pickled herring, then roasted on a spit. This recipe was from a cook called Elizabeth Birkett, who lived in the Lake District.

‘There is also a similar recipe from Izaak Walton in his 1653 book The Compleat Angler, which suggests filling a pike’s belly with oysters. I have tried both recipes and they’re equally good.’