Hundreds of Australia Post’s senior employees were among those to receive hefty bonuses during the pandemic, as the company spent more than $92 million rewarding its workforce last year.

A total of 345 employees earning between $200,000 and $500,000 shared in $28.2 million worth of bonuses during the 2019-20 financial year, according to data provided by Australia Post in response to a Senate estimates question on notice. 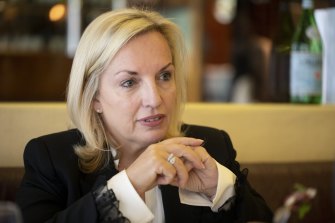 It amounts to an average salary top up of almost $82,000 each for those employees, and marks a contrast with the $5000 former chief executive Christine Holgate spent on Cartier watches as bonuses for four senior employees in 2018. Ms Holgate ultimately resigned in November as a result of the ensuing controversy.

Labor communications spokeswoman Michelle Rowland said the figures amounted to a double-standard in the treatment of Ms Holgate.

“Why did the board of Australia Post approve these lavish bonuses given their standing down of the previous CEO over purchasing $20,000 of watches?,” Ms Rowland said.

Ms Holgate reached a $1 million settlement with Australia Post earlier this month, following a long-running feud with the company’s board over the fallout of the watches scandal. She alleged she was illegally stood down last October, and accused chairman Lucio Di Bartolomeo of acting under pressure from the federal government, which he denied. At the time, Prime Minister Scott Morrison declared in Parliament that she should stand aside for an independent investigation or “go” from the company. The investigation subsequently cleared her of fraud or dishonesty, but concluded that Australia Post did not have any policies in place that supported recognition of executive performance with Cartier watches.

In a statement, Australia Post said its senior managers are paid performance-based remuneration and are eligible for an “at-risk” short-term incentive component.

“Senior managers are only rewarded when delivering performance that is aligned to the Australia Post strategy, helping to create long-term value and strong financial returns to the government,” the statement said.

“Remuneration is regularly benchmarked externally and must be positioned competitively to attract, motivate and retain highly-skilled senior managers. It reflects their responsibilities, performance, qualifications and experience.”