Victoria had its second worst day of the pandemic on Friday, with 627 new cases and eight more deaths.

Late on Friday evening, a government spokesperson confirmed the state's Emergency Management Commissioner, Chief Health Officer and Police Chief Commissioner will be given greater influence over the government's effort to bring the state's coronavirus crisis under control. 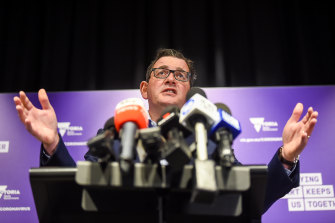 Victorian Chief Health Officer Brett Sutton said the panel faced "impossible decisions" that could cause widespread economic ruptures with the closure of non-essential businesses, tougher restrictions on high-risk workplaces and tighter limits on movement between suburbs of Melbourne and Mitchell Shire.

Professor Sutton said tougher restrictions would bring "really significant consequences" but admitted that after a record 723 new cases on Thursday and 42 deaths since Sunday, a tougher lockdown appeared unavoidable.

“It may be the case that an intervention in a certain area [such as high-risk workplaces] will make a difference. It may also be the case that we look at restrictions in areas that are not a driver of transmission,” Professor Sutton said.

“The impact on businesses, the impact on people’s livelihoods, on their psychological and emotional wellbeing are all part of those considerations. I’ve said before, these are impossible decisions in lots of ways. We are balancing harms.” 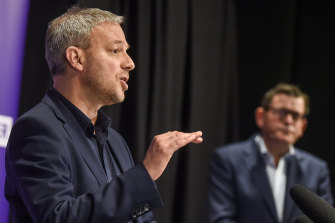 Chief Health Officer Brett Sutton will speak with his state and federal counterparts on the AHPPC on Saturday.Credit:Justin McManus

Five months after COVID-19 took hold in Australia, Victoria Police Chief Commissioner Shane Patton and Chief Health Officer Brett Sutton have been appointed to be part of the State Control Centre meetings, which will now be chaired by Emergency Management Commissioner Andrew Crisp.

The Department of Health and Human Services secretary, Kym Peake, has been appointed to the role of State Controller for Health. Professor Allen Cheng, from The Alfred hospital, Professor Rhonda Stuart, from Monash Health, and Professor Paul Johnson, from Austin Health, have joined the DHHS as Professor Sutton’s deputies, after Deputy Chief Health Officer Annaliese van Diemen decided to return to her former role of managing other communicable diseases, including the avian flu.

"We're halfway through the proposed six-week lockdown – it is almost certainly going to be tighter and longer," Professor Blakely said.

Victoria's aged care and healthcare concerns continued on Friday, with aged care residents comprising more than half of 928 active cases linked to nursing homes on Friday while there were 614 healthcare workers infected with the virus and thousands more colleagues in self-isolation.

Victoria had 349 people with coronavirus cases in hospital, including 36 in intensive care, while Friday's eight deaths included two men in their 50s and four aged care residents.

Geelong has recorded its first COVID-19 death, with a patient who was receiving palliative care passing away overnight on Thursday.

Mr Andrews said Victoria was fighting to overcome a bind where the majority of cases were occurring in essential industries such as aged care, healthcare, meatworks and distribution, which would not normally be shut down in a widespread stage four lockdown.

"So it may well be the case … that we need to take further steps, that the steps we've taken are not enough to pull ths up."

The Premier revealed that one in four people who had tested positive to coronavirus were not home when Australian Defence Force members knocked on their door to conduct contact tracing on Thursday. He said those 130 people were referred to Victoria Police to locate them as soon as possible.

About 400 of a total 1300 positive cases visited by the ADF since their doorknocking began eight days ago have not been at home.

“It is just not acceptable,” said Mr Andrews.

“No element of this strategy will be successful if, when we door knock you, we are finding one in four people are not home.” 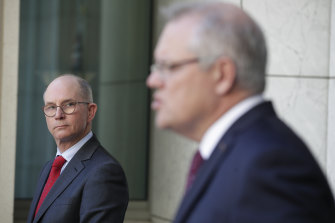 The AHPPC, chaired by Australia's acting Chief Medical Officer Paul Kelly and comprising chief health officers from each state and territory, met on Thursday but could not reach a decision on what extra measures should be introduced in Victoria

Professor Sutton said as well as outbreaks in high-risk settings such as aged care and healthcare, he was concerned by Victoria’s levels of community transmission with an unknown source, which increased by 94 on Friday.

He said Victoria would not necessarily replicate New Zealand’s lockdown, in place for a month, which closed schools and all businesses except for essential services such as supermarkets, pharmacies, banks and medical services.

After the Prime Minister reiterated on Friday that Victoria’s level of community transmission remained unacceptably high, Mr Andrews said Victorians should take comfort that he and the Prime Minister were in lock-step in canvassing a stricter lockdown.

“There is a complete acknowledgement that there can be no economic recovery until we deal with this public health challenge,” the Premier said on Friday.

“It is incredibly difficult, in fact it’s almost impossible for us to see businesses recover unless and until we get these numbers down. That will mean there is a significant imposte. It may be that there will be further support that is needed for businesses and workers.”

Mr Andrews called the figures “rather disturbing” but said he did not yet have plans to increase punishments for positive cases who leave home without good reason.

Professor Sutton added that nine days after masks became compulsory, their effect appeared promising but was not yet fully clear. Fifty-three people were fined for not wearing a mask on Thursday.

Meanwhile, the first witnesses to give evidence at the inquiry into Victoria's hotel quarantine program were confirmed on Friday.

Director of Infectious Diseases and Microbiology at Austin Health Professor Lindsay Grayson, Director of the Microbiological Diagnostic Unit Public Health Laboratory at The Doherty Institute Professor Ben Howden and Dr Charles Alpren, epidemiolost from the Department of Health and Human Services, will all give evidence on Thursday.