Growing up in Melbourne’s western melting pot, Alice Pung never felt threatened by the drug culture among the migrant kids around her, but she was very much aware of it.

Though a self-confessed “anxious and slightly depressed” girl, the author-to-be could recognise even then that Asian kids using and selling heroin were from families which, like her Cambodian-Chinese refugee parents, had escaped trauma. 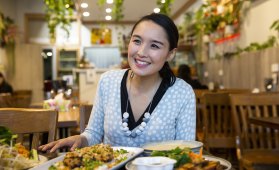 Alice Pung lives on campus at Melbourne University as a college artist-in-residence, but her roots are still firmly in Footscray.Credit:Paul Jeffers

“Right now the news media like to talk about ‘African gangs’ but back in the ’90s, we were the gangs; the ‘Asian gangs’. A lot of young men with whom I went to school who were drug-dependant had very adverse life circumstances, they grew up in [refugee] camps, some came here as minors,” says Pung, at the vegan restaurant she has chosen in her childhood stamping ground of Footscray. “The drugs were a way to ease their pain.”

As an established author whose published work includes three novels, including her latest, One Hundred Days, and as a mother of three who works both as a state government legal adviser and a university artist-in-residence, Pung’s life seems a world away from her Braybrook and Footscray roots.

Lately, she has done a glossy fashion shoot for this masthead’s magazine Sunday Life; then, “older ladies” would come into her father’s now 35-year-old Footscray electricals store and ask, “politely, never rudely” if rather than having the young Alice serving them they could have “an Australian”. 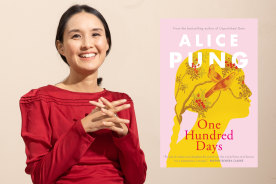 “I was born here, but I never thought [to say] that, I would just get Jo who was Italian, or Jim who was Macedonian, who were white,” says Pung, her nine-month-old daughter, Celeste dandling adorably on her lap. “I was conscious of it, but I didn’t know what racism was.”

She is able to relate these episodes benignly, perhaps in part down to her Buddhist upbringing and practice. She also recalls, without a hint of drama, hearing “the ambulances go past a couple of times a day” ferrying young overdose cases who she could easily have known from one of five high-schools she attended.

“You weren’t fazed by that, because people who were drug dependent left you alone, you weren’t part of their world,” she says. “Footscray was a great suburb to live in, multicultural in an unassuming way”.

Unassuming is the perfect word to choose for a writer whose popularity on the shelves and at the coolest literary events is soaring, but whose lack of ego makes her a delightful lunch mate. 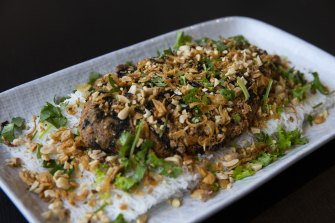 ‘Flounder’ is in this case completely fish-free.Credit:Paul Jeffers

She has chosen Huong Viet, a no-fuss but busy spot not far from her dad’s shop, where vegans can find delicious versions of classics such as “Peking duck” pancakes and “Sweet and sour deep fried flounder”. The latter arrives looking decorative and tasting like real fried fish, as part of a DIY rice paper rolls main course.

Pung has chosen the restaurant because its soups here are the only thing she could hold down while pregnant with her three children with husband, Nick, a Melbourne University project manager. The older two are six and three.

Issues around motherhood feature heavily in One Hundred Days, which is written from the point of view of a pregnant 16-year-old, Karuna, whose over-protective mother confines her in their housing commission flat for 100 days to keep her away from trouble. It is a tradition in some cultures, and one Pung says her mother, Kien, a former Cambodian factory worker, considered around the time of Pung’s first birth — but which did not proceed as her baby son came early. 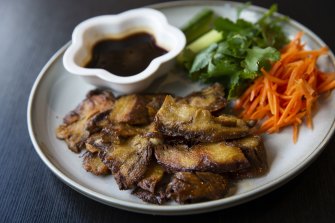 Peking duck pancakes look and tastes like authentic duck but are vegan.Credit:Paul Jefferes

The book has divided readers, some of whom consider Karuna’s treatment to be abuse, while others, including Pung, see it more as “a practical kind of love”.

Pung refuses to condemn this manifestation of maternal commitment: “There is no physical abuse in the book, but the camp is divided. Half my reviews say it is about fierce and protective love and half say it is about cultural abuse and shouldn’t be condoned. I make no judgement because, I don’t know, it’s hard to judge people with whom you’ve grown up.”

Like her own mother, who is now a huge support with child-minding but also still works in the family’s shop, Karua’s mother “did what she had to do”. Pung believes some mothers are scrutinised more closely than others: “Especially mums of a certain class; they yell at their kids – that’s the only way of managing, they’re stressed all the time.

“When you are really stressed as a mum, you can’t help but use control as your primary parenting method. Some can sit the kids down and tell them why it was bad to run across a road just then, but if you’re a stressed, out-working mum in a garage you grab your kid and smack them and tell them not to do it again.

“And then you get back on the sewing machine. We tend to judge them more harshly than any other.”

Her relationship with the serious business of motherhood began decades earlier than many her age, when she was often left to care for tribes of toddlers plus other young children while her mother and aunties worked. She was only 12 or 13 herself.

“We were lucky no neighbours felt the need to intrude and call the cops on my parents who just had to work [her mother worked long hours with dangerous chemicals, making jewellery in a backyard shed]. One of my sisters was a toddler, another was about four and there were a whole bunch of two-year-olds that belonged to various aunties,” she says.

Pung has discussed how much stress it caused her to be left with so many little children, and says one reason she became a writer was as an outlet: “I wrote because Mum told me never to shake babies when I was angry because it was dangerous.”

She is amazed at the women’s level of trust in her, but used the tension it caused in her writing. “I just had writing … because we didn’t have Facebook then, the internet wasn’t a big deal then and I was very lonely growing up. As the eldest, I was home all the time. We’re going through lockdown now, but basically my childhood was one big lockdown – unless I was in Footscray, when I was free to roam, which is ironic!”

Pung’s father, a plastics factory manager before he was forced into the killing fields to bury bodies of men and women murdered by Pol Pot’s regime, was also protective of her. This prompted her choice to move out of home into the first women’s college in the southern hemisphere, Janet Clarke Hall college at Melbourne University, where she worked as a live-in tutor. This was a culturally acceptable way to go into the world without being married.

She met Nick on campus and the family lives in three converted student rooms in the college, where Pung is now artist-in-residence after 17 years there. They eat with the students for the seven months of the year that the college kitchen is open, and thoroughly enjoy spending time with the young residents, she says. 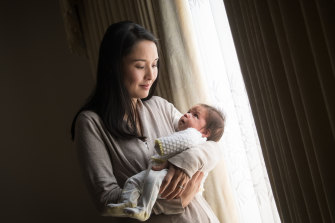 Alice Pung had baby Celese in the 2020 lockdown.Credit:Justin McManus

“It’s a wonderful life at Janet Clarke Hall [which is no longer single-sex]. To this day more women apply than men, so it’s a gentler college.”

Her mental health is now strong, which Pung puts down to having achieved power and control over her own life. Still, she is conscious not every young woman is able to achieve this. “I had a friend sharing the same bed as her mum until she married, and a friend locked up when pregnant [by her family]. You still hear about schoolgirls from Sudan who get locked in the flat because their parents think they will be good girls if they’re cooking and looking after their siblings,” she says. 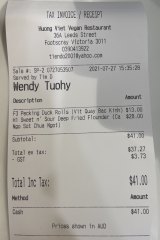 “[Some] migrant parents have no idea what to make of this new world in which they’ve found themselves. If you’ve been in a refugee camp where the safest place was to stay inside all the time, that is what you perpetuate isn’t it.”

Finishing lunch, in which Pung has been able to discuss and digest even the most fiddly subjects – and dishes – all while wrangling her baby, the author says she still loves the streets of her childhood. They have changed, of course, the “poor people, mostly Asians and migrants” have been somewhat displaced.

This transformation has gone as far as the family shop. “My dad reckons you know how we talk about gentrification, he calls [newer arrivals] the ‘educated young people’. He reckons they’re the best because they buy electrical appliances without bargaining until you’re sweating your brow off.

“They don’t need to pinch pennies. They’re kind and you don’t experience racism because they’re hipsters; they’re never asked for another salesperson to sell them an item heavily discounted. They’ll buy things near retail price.”