Former parliamentary staffer Brittany Higgins, whose allegations that she was raped in Parliament House prompted national debate about Canberra’s workplace culture, has signed a major non-fiction book deal worth an estimated $250,000.

The contract was agreed with publishers Penguin Random House Australia after a three-way auction involving Allen & Unwin and Hachette last month. Her publisher will be Melbourne-based non-fiction specialist Alison Urquhart. 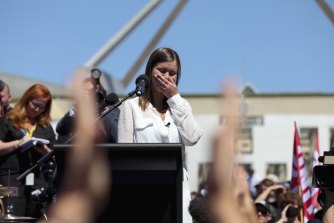 Brittany Higgins speaks at a rally on March 4.Credit:Dominic Lorrimer

The memoir will take in Higgins’ account of her alleged rape in the office of then-defence industry minister Linda Reynolds in March 2019 and her role in the subsequent movement for greater protection for women in Canberra, and workplaces more generally.

Higgins has started writing the book, which is due out next year. Industry sources, who were not authorised to speak on the record, said the key factor in her choice of publisher was not the size of the deal but rather how much time she would have to write the book. Higgins was not keen on having to deliver a manuscript hastily so it could hit bookshelves in time for Christmas as other publishers had hoped.

Higgins, whose accusations prompted Prime Minister Scott Morrison to apologise and launch reviews into the complaints process and treatment of women in Parliament House, had a firm idea of what she wanted to write and met staff at Penguin Random House before signing the contract, insiders said.

The advance is considerable in Australian terms, although not at the level that a major sportsperson or prime minister would attract. Higgins has made a contractual commitment to give part of the proceeds of the book to the Canberra Rape Crisis Centre.

Higgins was supported by author Peter FitzSimons, a columnist for The Sydney Morning Herald and The Age, who volunteered in the role of de facto agent, facilitating the auction and brokering the deal.

The pair have formed a close friendship after being introduced via FitzSimons’ wife, journalist Lisa Wilkinson, who interviewed Higgins about her alleged rape on Sunday’s The Project in February.

The conversations with publishers started after Higgins delivered an emotional address to protesters outside Parliament House during the March 4 Justice rally.

“This isn’t a political problem. This is a human problem. We’ve all learnt over the past few weeks just how common gendered violence is in this country. It’s time our leaders on both sides of politics stop avoiding the subject and side-stepping accountability. It’s time we actually address the problem,” she said in her speech.

News.com.au’s political editor Samantha Maiden, who reported the story of Higgins’ alleged rape earlier this year, is working on a broader book about sexual misconduct in Canberra.

Australian of the Year Grace Tame, an advocate for sexual assault survivors, is also believed to have had preliminary conversations about writing a book, but may be less interested in penning a classic memoir and may wait until her time in the position has finished.

Penguin Random House would be hoping for sales of up to 80,000 copies for Higgins’ book if printed as a trade paperback book.

As a market comparison, Julia Gillard’s My Story has sold 77,000 copies across three editions for Penguin Random House and former Australian of the Year Rosie Batty’s A Mother’s Story (HarperCollins) has sold close to 50,000 copies across two editions, without taking into account e-books or audiobooks. Bri Lee’s personal experience of the justice system and sexual assault, Eggshell Skull (Allen & Unwin), has sold 35,000 copies.

Catch all the day’s headlines

At the end of each day, we’ll send you the most important breaking news headlines, evening entertainment ideas and a long read to enjoy.  Sign up to The Sydney Morning Herald’s newsletter here, The Age’s here, Brisbane Times’ here, and WAtoday’s here.