Boy, 16, refuses his mother’s ‘creepy’ request to take his sister, 13, on a ‘practice’ date before she goes out with a boy her own age – but is accused of being ‘immature’

A disgruntled teen has become embroiled in a row with his mother after he refused her request to take his 13-year-old sister out on a ‘practice’ date.

The young man, 16 believed to be from the US, took to Reddit to explain that his mother had asked him to take his sister out so she could learn what to expect from the real thing.

However, he refused, saying the idea was weird and pointless, seeing as he would not treat his sister the way he would a girl he was dating.

When he refused, his mother had called him a ‘brat’ and told him that the task was ‘classic big brother stuff’.

Commenters were divided with some branding the idea ‘creepy’, while others said he’d missed an opportunity to do something lovely for his little sister. 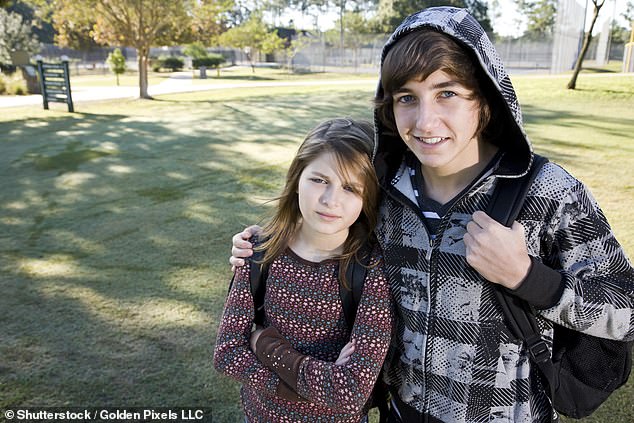 A brother, 16 and believed to be from the US, explained his mother asked whether he could take his sister, 13, on a ‘date’ after a boy her age asked her out. Pictured: a brother and sister, stock picture

The teenager explained his mother wanted him to show his sister what to expect on a date, and ‘basic etiquette stuff’ after a boy her age had asked her out.

‘I’m obviously not going to treat my 13-year-old sister the same way I would treat a girl my age that I was trying to date for real, so I don’t even think she would learn anything from it,’ the 16-year-old said.

Some people, including women, were immediately alarmed by the unusual ask, saying it was weird for a big brother to take his sister on a date.

‘I agree that this is cringeworthy. As the youngest sibling (female), if any of my older brothers did this when we were younger I would feel so weird and grossed out. This is not normal sibling behavior,’ one said. 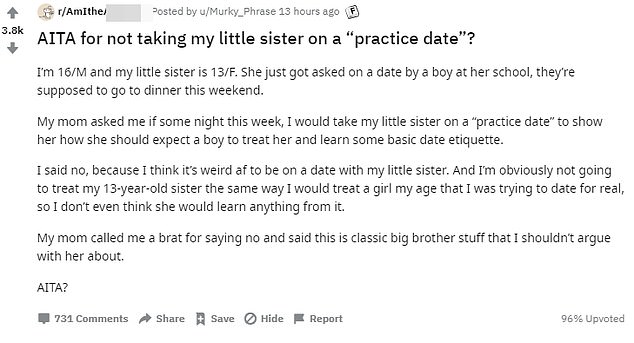 The teenager shared his story on the Reddit sub-forum Am I the A******, asking whether he had been right not to take his sister on the date

‘That is weird as f***. You’re her brother. Going out to eat with you would be nothing like going on a date, or it shouldn’t be. I’m an older sibling, and this is absolutely not “classic big brother stuff”, it’s creepy incest stuff,’ another wrote.

‘A strange request, have her practice date with your mom or one if her friends. I would die if my brother took me in a practice date,’ said one.

However, others claimed the teen was being dramatic, because his mother had only asked her to show his sister what to expect and not to really date his sister.

‘You just needed to eat dinner with her, and be a respectful man. Teach her how she should expect a gentleman to treat her. You had an opportunity to be a good big brother, and you missed,’ one said.

Some thought the mother’s ask was very strange, and that a big brother should be taking his sister on a date

One person explained that while the ask sounded strange on principle, going through with the date could have been beneficial for the sister.

‘I get why you think it’s weird. It sounds weird as hell off the bat,’ they started.

‘But I also think I get what your mom is trying to do. She wants your sister to go through the basic mechanics of a date so she feels more confident on the date itself.

‘Less about “Treat your sister like you’re on a date” and more like “walk her through the motions so she knows what to expect”. Like, from answering the door to who pays the check, etc.

‘Man up – take her out for a dinner on your parents – make her feel loved, special and respected. Set the standard that you want future dudes in her life to meet. No one is telling you to treat your little sister like a girl your age you want to date,’ said another.

Some pointed out that while the respect sounded weird, the teen was over-interpreting what his mother had asked him to do

‘Realistically you could talk her through it also, but actually going somewhere and going through the motions on a dry run can definitely help people with nerves.

One person said the misunderstanding could come from the poster’s age.

‘Like others said, the mom likely wanted a walk-through, not a date-date. OP is kind of a d*** for not seeing that, but most 16 year old boys are.

‘I hope he realizes what his mom was asking and is on board, especially if there isn’t a dad figure around.’