When one of my daughter’s birthday presents turned out to be clothes with the tags cut off I wondered if they’d been cheekily regifted.

It turned out they had. Without a hint of embarrassment, the mother told me that she’d bought the clothes for her own daughter who didn’t like them. So, the mother decided to give them to my daughter instead. 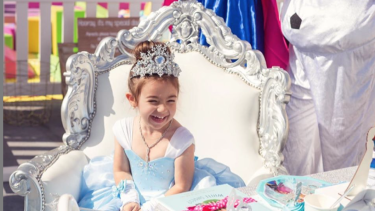 At first, I was a little shocked at her honesty. And then I was super impressed.

My daughter wears the clothes often and couldn’t care less that they had been regifted.

It’s strange that regifting is taboo given that it fits perfectly with many of our values about reducing consumption and limiting waste. The speed and volume at which so many must-have kids’ presents end up in landfill would surely make even the most ardent Ayn Rand-reading fan of capitalism pause a moment and wonder if there wasn’t a better way.

Surely our love for our kids would be far better expressed in preserving the environment they’ve inherited instead of giving them another piece of plastic they don’t need and will only play with for 10 minutes before they move onto the next environmentally-disastrous fad.

But the social rules around gift-giving are so strong that many of us not only go along with the environmental disaster that is a children’s party, we have also unwillingly ended up in an arms race that we can scarcely afford.

In my early years of parenting, when I was still learning the conventions of children’s birthday presents, a more experienced mother told me the present rule: the financial value of the gift should be equivalent to the per-head cost of the party.

That equation put an end to any pretense that presents are spontaneous acts of kindness. Things only got worse once I discovered that the days of party pies, Sara Lee cakes, and unsupervised playing in the backyard are long gone.

We now have professional fairies and superheroes that cost $400-plus each, venue hire costs, catering that cost more than my wedding, French bubbles for the parents, and gift bags that rival the Oscars.

Even the humble game of pass the parcel is expensive now that our every-kid-is-special-and-gets-a-prize culture dictates that we have to cough up for a present for all the guests.

When you then factor in the time spent in party planning and event management, the per-head party cost that determines the present value can almost make you wish your kid was a Nigel No Friends.

You spend the same amount on the birthday kid that their parents spent on your kid.

Supporters have defended these mothers by pointing out that most of the merchandise came from sponsors and that it’s their kid so it’s their business.

But is it really that simple? There is a reason these people are called “influencers”. Companies don’t just shower them with free products because they think their kids deserve it.

No, these companies have made a careful business decision based on the assumption that these women are effective at “influencing” the purchasing behaviour of rest of us.

In the process, they’ve lifted the bar for children’s birthday parties, thereby increasing the expected present value other parents now have to cop.

Even if we are able reject the ever-increasing party cost per-head present value, we bump up against another unspoken, but rigidly enforced, children’s present giving rule: reciprocity.

You spend the same amount on the birthday kid that their parents spent on your kid. But I’m now starting to see the occasional $50 gift card in kids’ present hauls. And I’ve heard stories of some kids receiving close to $100 (from a single guest) in present value.

If we keep going on this path, we’ll be spending a small fortune and going into debt just to ensure our kids aren’t ostracised as social pariahs.

With family budgets tightening and our landfill crisis mounting, it’s time to rethink the social conventions around present giving. And we need more mothers like my regifting friend to show us how it’s done.