Dark, prickly meta-humour may not be the most obvious path to mass appeal as a comedian, but it’s working for Daniel Sloss.

The cocksure Scotsman has just come off scooping the People’s Choice Award for most tickets sold at the Melbourne International Comedy Festival. 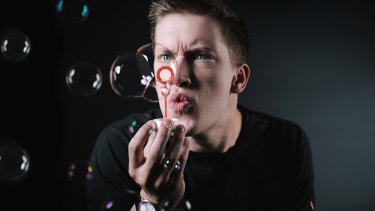 Daniel Sloss turns his brutal comedic powers on the selfish and opportunistic.Credit:Troy Edige

That doesn’t stop him from immediately unloading on our Victorian neighbours – the city is, he explains in a memorably raunchy analogy, the most sensitive area of Australia.

After a strangely low energy musing on why Americans are offended by swearing, Hubris soon kicks into gear and sees Sloss expertly dance along the dividing line between cruelly funny and just plain wrong.

He’s far too clever, however, to settle for shock humour. In bits like an animated rant about which emotional support animals he deems legitimate, he turns his brutal comedic powers on the selfish and opportunistic.

Elsewhere, a riff on drinking whisky in Japan spirals off somewhere truly dark, but there’s something weirdly principled about how he contextualises his decision to tell the joke.

He follows many of his more bellicose punchlines with a deconstruction of why exactly the joke wasn’t offensive. Other times he all but dares the audience to hate him before twisting the story around to take aim at his own narcissism.

There’s real precision in both his writing and act-outs, but he also proves nimble on his feet with an off-the-cuff riff sparked by an audience member dropping a glass.

Perhaps not quite as ambitious or topical as his last special X, this is nonetheless a smart, spiky hour-and-a-bit of stand-up from a comedian who revels in casting light over the darker corners of his psyche.

“I wish I was a better person,” Sloss sighs at one point. Ah, but then he wouldn’t be nearly as funny.

Daniel Sloss is at the Enmore theatre until April 25