The moment my grandmother came to me from beyond the grave: Woman who claims to have supernatural ‘sight’ says her relative – dead for 15 years – visited her days before her wedding

Since her teenage years, author Clare Johnston has felt a powerful pull to the supernatural, experiencing premonitions that she’s then watched play out before her. Here, Johnston explains the unsettling encounters she’s had, including seeing her dead grandmother, who had promised to be at her wedding, the day before she was due to wed…

Sitting on the bottom step in the basement of a Glasgow tenement surrounded by baffled friends, I finally felt calm.

For the past hour I had bewildered them with talk of a terrible accident on the stairwell.

It was 1991, I was 18, and this was an event that would prove to be the most troubling of all, in a year in which I experienced a series of strange premonitions and supernatural experiences.

I vowed that night that I would find out if something had happened on that stairwell, so certain was I of this sense of grave danger that had engulfed me. 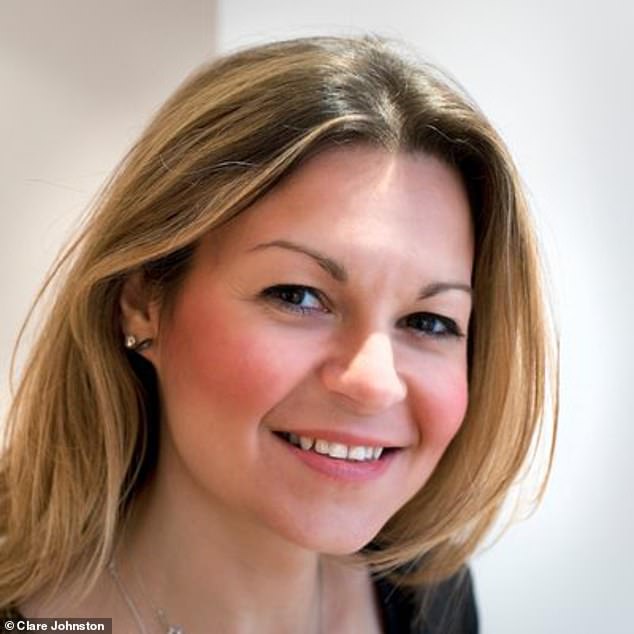 Clare Johnston (pictured) first started experiencing a series of strange premonitions and supernatural experiences aged 18, in 1991, when she was a student at Glasgow University

But I didn’t have the chance to investigate, because the very next morning I was awakened by the most awful sound.

At first I heard my top-floor neighbours – two young male doctors – talking noisily. Then I heard a snap, a loud shout, and then something solid falling and slamming against the bannisters on the way down.

I thought, hoped, that it might be a piece of furniture until I heard the gut-wrenching noise that followed. It was the cries of one of the men from the ground floor.

It was he who had fallen 60 feet from the attic – he had been reaching out to grasp the wooden frame around the attic opening when it had given way causing him to lose his balance and fall.

I ran out to the stairwell accompanied by my flatmate.

‘Go down and hold his hand’, his friend shouted down to us as he rushed to call an ambulance.

When we reached the ground floor, the sight of the injured man’s body, his limbs twisted beneath him, his broken bones, was overwhelming.

My flatmate held his hand as I paced beside him staring into his terrified eyes and telling him over and over, ‘you’ll be okay’. 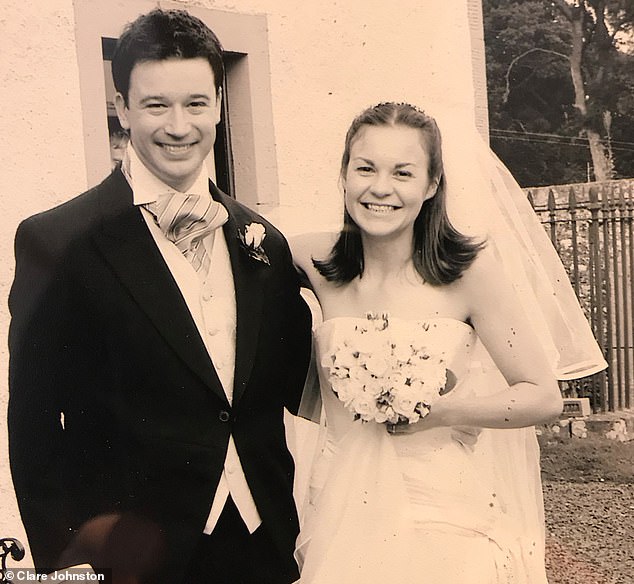 Then just a couple of days before her wedding in 2003 (pictured), Clare had another vision

But all the time I was agonising as to whether I had caused this accident with my ‘feelings’ the night before.

Miraculously, and so fortunately, he survived. The banisters had broken his fall.

But the terror of that experience meant I never wanted to foresee anything like it again. I said out-loud that I wanted these premonitions to stop. They were way more than I could handle.

In the months leading up to the accident on the stairway, there was a succession of strange occurrences.

I was in my first year at Glasgow University and living with three flatmates. I had a room of my own and it was the coldest in the property by far. Chillingly cold.

Within a couple of months of settling in I started to notice what I felt to be a presence when I was alone.

I’d see what I thought was a figure in the corner of my eye, turn, and no one would be there.

Then, one morning, I woke earlier than the others and went to the kitchen to make a cup of tea, only to find the kettle had been freshly boiled. I put my head around the doors of my flatmates’ rooms and they were sound asleep.

Not long after, I again woke early one morning to see my alarm clock change from 06:59 to 07:00 and thought to myself how odd it was that I should have woken right at that moment. 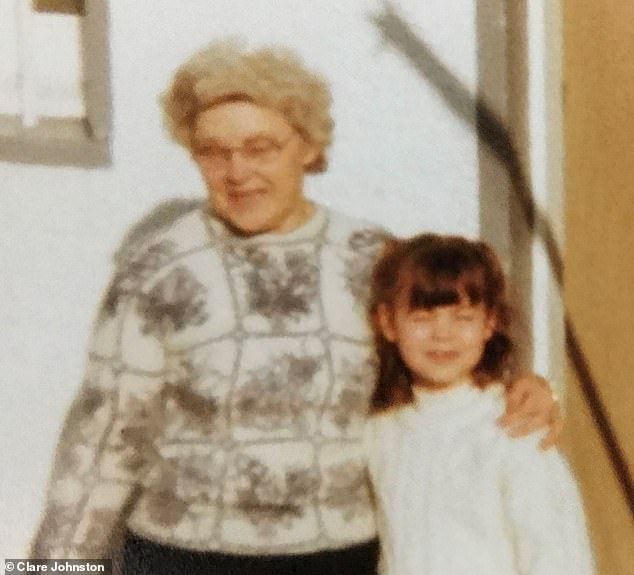 Clare was standing at the top of the staircase in her parents’ home when she felt a presence next to her. Turning around, she saw her grandmother who had died 15 years before from cancer. A young Clare pictured with her ‘Nanny’

Like most students, posters bedecked the walls of my bedrooms and suddenly, one by one, they started to fall to the ground.

The largest, which had been hanging on the door, then rolled across the floor in front of my eyes. I got up and ran to my best friend’s room, stunned by what I’d seen.

These goings on soon became a talking point among my university friends who all made sure they spent Halloween with me.

Playing up to it, I developed a little system of reading playing cards and I became very good at telling friends about their lives and families as they would put my psychic skills to the test.

Then I started to experience dreams that came true. 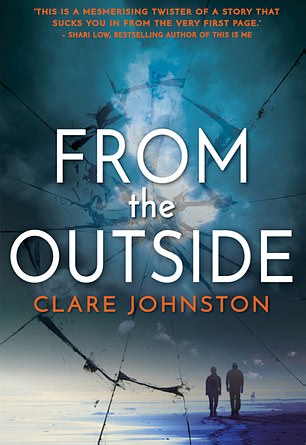 In one, I dreamt I walked into a rehearsal at university for a play I was acting in, to find my fellow cast-mates in darkness, save for a single dim bulb, because there was a problem with the lights.

The director stepped forward to explain what had happened and then turned to the young guy next to her and said, ‘Let me introduce Chris. He’s playing your husband in the show.’

Chris stepped forward to say hi and I recognised him from one of my classes. He was wearing a red, checked lumberjack shirt – the very same one he was wearing only the next day when that exact sequence of events happened for real.

After the horror of the accident, things settled down. I moved flats and I didn’t have any further supernatural experiences for years.

That was until just a couple of days before my wedding in 2003.

I was resting in bed one afternoon, taking a break from the mayhem of last-minute preparations and, as I lay there I was thinking through all the things I still had to organise.

I closed my eyes and, in an instant I was transported to my parent’s home in the Borders from where I would leave for my wedding.

It wasn’t a daydream, it was more than that – like a movie imposed on my mind in which I was a part.

I was standing at the top of the staircase wearing the white dress all ready to go. My mother and sister were fussing in the bedroom nearby and I was waiting for them to come out and join me.

Then, to my left, I sensed someone on the staircase. I turned to see my grandmother walking up the final few steps towards me. She said nothing, just simply smiled.

My grandmother – I called her Nanny – had died 15 years before from cancer. We had been very close and her death had left me heartbroken.

Just before she passed away, I had been sitting with her and I told her I was scared. She looked at me and said with total conviction: ‘Don’t you worry, I will be there on your wedding day.’

Far from the scary premonitions and experiences of the past, this vision brought me so much comfort and I knew, without a shadow of a doubt, that my grandmother had sent me a message.

Years later, my mother had a very similar experience involving Nanny and there is not a person on earth who could convince us we were imagining it.

From my intrigue in the afterlife and the other-worldly contact I believe I’ve had, a story grew in my mind and I began to write it. That story became my new novel, From the Outside.

It centres around 44-year-old internet entrepreneur and philanthropist Harry Melville who dies in a car crash and watches (from the other side) the impact of his death on his twin brother, Ben, and his wife Sarah.

As they emerge from his shadow, we learn that Harry is not quite the man portrayed in the eulogies at his funeral – and as secrets are uncovered, we find he has much to make amends for.

The novel explores whether we can in death right the wrongs we carry with us to the grave.

Those instances in my life, good and bad, where I have felt supernatural connections made me want to explore the idea that death may not be the end – and that maybe, just maybe, our loved ones can influence us from beyond the grave.

I don’t have all the answers, but I like to think those we’ve lost are never too far away, that they are still a part of our lives, and that it is only a matter of time until we meet again.

From the Outside is published by Urbane Publications on July 4 and is available to pre-order now from Amazon and other major book stores.