Unions, the NSW government and gig economy companies will for the first time develop a joint safety plan for the industry following the spate of deaths of food delivery riders.

The Transport Workers Union, road safety organisations and delivery giants including Uber met on Thursday to begin work on the project, a day after the NSW government announced it would start preparing a workers compensation scheme for the industry in the new year. 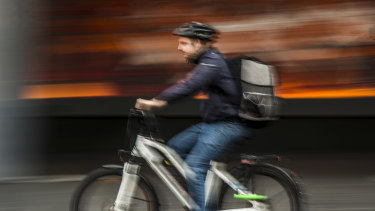 The meeting is an indication all participants in the industry want to have better safety standards in the largely unregulated sector, a situation which has meant delivery riders commonly receive limited safety advice from food delivery platforms and fear reporting accidents and injuries, according to a state government study.

NSW Better Regulation Minister Kevin Anderson said the meeting would help regulators learn what is working and form the basis for industry guidelines.

“We want to learn from what is working well, and identify new measures that can be introduced and turn that into practical guidelines that both drivers, riders and companies can rely on,” he said.

Organisations at the round table included Unions NSW, Menulog, DoorDash, Easi and Hungry Panda, whose worker Xiaojun Chen was one of five riders to die on Australian roads in a three month period earlier this year.

Based on 11 interviews with industry representatives, the report says delivery companies are wary of offering more safety services to riders because they fear it could lead workers to being re-categorised as employees in a legal quirk.

As a result, some platforms offer but do not force riders to use safety gear.

Transport for NSW and SafeWork NSW will use the views collected at the meeting to develop a safety plan for the industry.

A communique from the meeting said, “Forum participants recognised that safer roads in NSW means improved safety for the wider NSW community. They committed as a matter of urgency to work together to develop a practical evidence-based collaborative Food Delivery Rider Safety Action Plan”.

Thursday’s event follows the NSW government’s announcement that it will start work on a workers compensation scheme for the industry in the new year.

The national secretary of the Transport Workers Union, Michael Kaine, said the state government’s moves to protect workers were welcome but argued the working group should also look at the causes of injuries, including pay and conditions.

A Deliveroo spokeswoman said the company was committed to keeping riders safe and welcomed the meeting.

“Any consideration of initiatives must be thoughtful, balanced and well planned and extend beyond the role of the food delivery platforms to areas such as traffic management, road infrastructure, education and community awareness,” the spokeswoman said.