It’s going to be a huge afternoon of early-2000s nostalgia: Delta Goodrem will be joining Robbie Williams on stage during the pre-game entertainment for Saturday’s AFL Grand Final. The news was confirmed at a media call on Thursday afternoon, after weeks of rumours regarding a surprise guest act.

Williams himself announced the news, calling Goodrem “the loveliest person – both inside and out; beautiful and incredibly talented”. This comes just a couple of weeks after Goodrem performed the national anthem at the Brisbane v Melbourne semi-final to much acclaim.

It has, however, come as a bit of a surprise as many fans were expecting Williams to announce Kylie Minogue as his special guest. The Australian icon famously collaborated with the singer on their 2000 hit Kids. And the potential reunion was first teased a few weeks ago when, speaking to The Fox Melbourne, Williams invited the pop star to join him when casually prompted by the breakfast radio hosts.

“I need to ask her,” he said. “Maybe I should do that on this radio show right here, right now. Kylie, please come and sing with me. I’d love it if you did.” 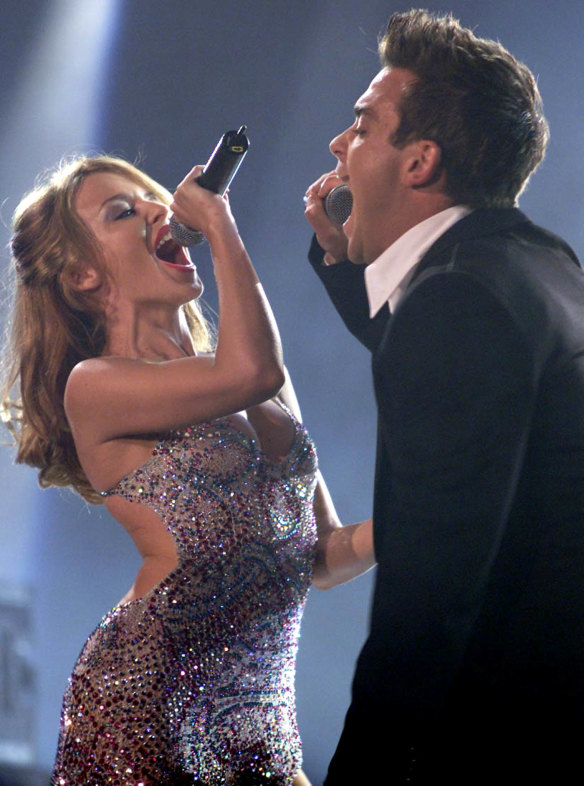 The speculation then reached a peak on Tuesday morning when AFL CEO Gillon McLachlan got involved. When SEN broadcaster Gerard Whateley asked him if Minogue would make an appearance, McLachlan – an otherwise composed and articulate speaker – responded with a long pause.

Barring any last-minute surprises on the day, it now looks likely he was referring to Goodrem – though it’s not yet clear what the pairing will look like.

The latter, of course, will be singing his 1979 classic Up There Cazaly – a tradition which has continued through the pandemic, with Brady performing the song at an empty MCG in both 2020 and 2021.

With the big dance returning to Melbourne this year, the AFL is certainly keen to put on a big show and Robbie and Delta seem like a good bet to deliver.