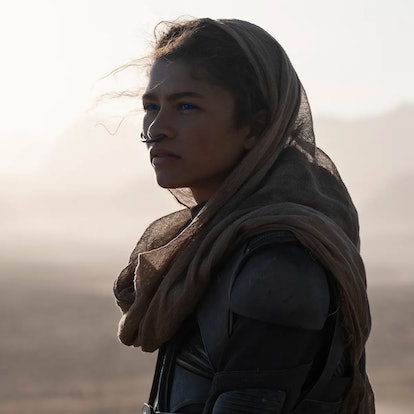 Zendaya fans who made it through the two-hour and 35-minute sandstorm that is Dune just for their favorite actress are not happy. Despite the fact that Zendaya was touted around the world over the past few weeks on the Dune press tour and made to look like a major character in the sci-fi remake, she is only actually on screen for seven minutes (less that 5% of the movie if anyone cared to know). It seems a bit ridiculous. Why waste precious Zendaya talent like that? And why promote her so much when she basically just makes a cameo in the film? Unfortunately, we don’t have an answer to the latter question, but don’t worry, because the movie’s director, Denis Villeneuve, has heard your complaints and he promises this isn’t the last we’ve seen on Zendaya’s Chani in the Dune franchise.

“This movie is really focused on [Timothée Chalamet’s] Paul.” Villeneuve explained to the Los Angeles Times. He continued, saying he made choices about what to include and what not to include “in order to make sure that the first movie would have momentum and be visceral and not suffer from too much exposition.” So, that explains the lack of Zendaya and while Villeneuve does not mention the actress by name, it seems clear he is referring to her considering the backlash over her lack of screen time.

“There are some characters that are less developed that I’m keeping for the second film—that’s the way I found the equilibrium,” he said. “We tried in this movie to stay as close as possible to Paul’s experience. Then, in the second one, I will have time to develop some characters that were left aside a little bit. That’s the theory. I hope it will work.”

It was revealed on Tuesday that a Dune sequel was officially greenlit by Legendary and Warner Bros. for an October 2023 release so Villanueve will have his chance to develop more characters. Chalamet seemed to confirm he will return in the second movie by posting about the news on Instagram. While Zendaya didn’t comment on the news directly, she did share Chalamet’s post, so it looks like Chani will finally be getting the screen time she deserves.