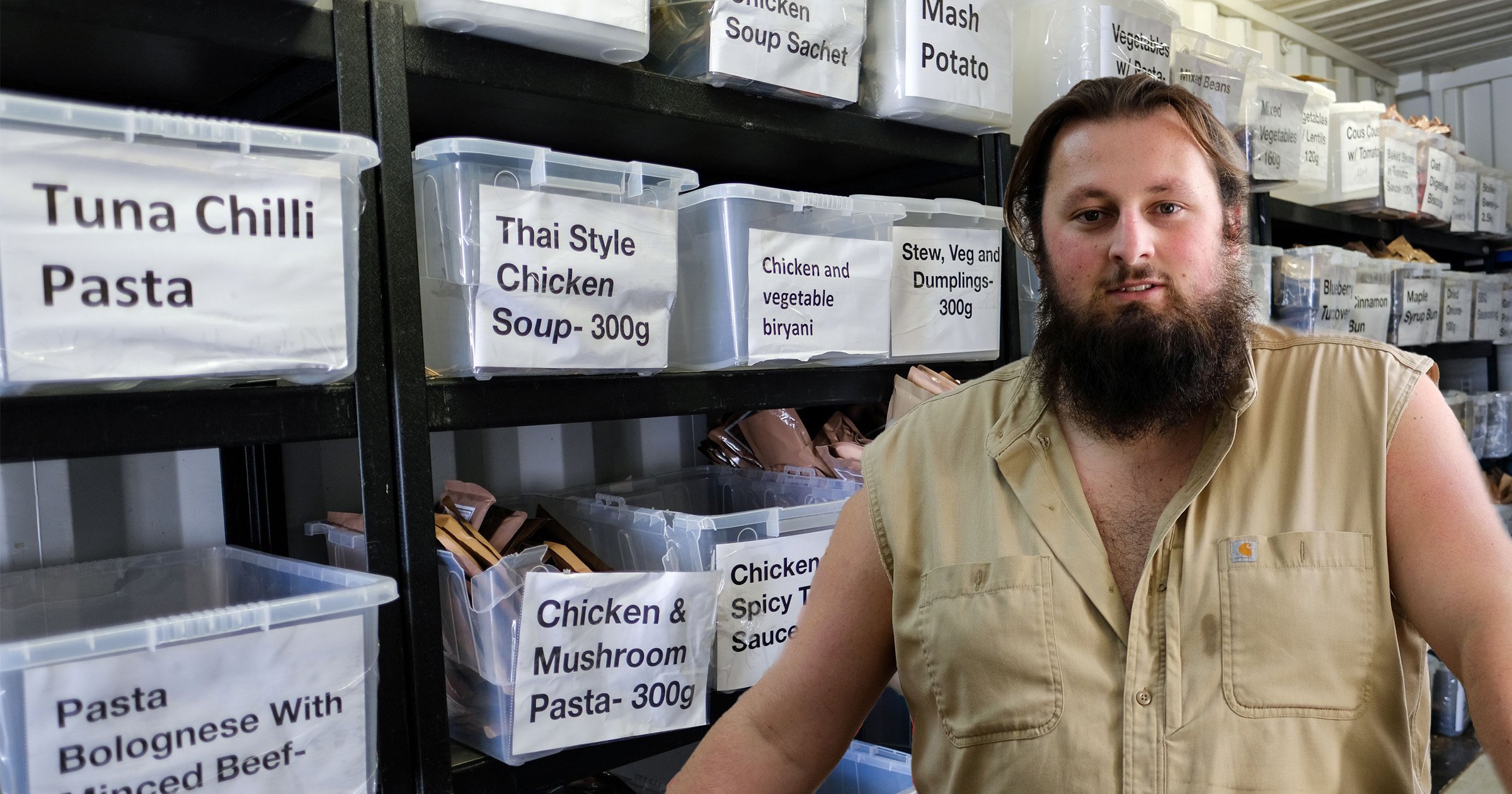 The last few years have been pretty rocky on the global news front.

From unexpected political results, to a devastating pandemic, to food shortages and extreme weather events – some people feel that we are closer to catastrophe than ever before.

If the worst was to happen, and global events were to spiral out of control, one man in Cornwall would be ready.

Lincoln Miles set up a prepping shop eight years ago – and it is now the UK leader in emergency preparedness, survival and emergency gear.

Lincoln runs Prepper Shop UK from an industrial estate in Newquay, where he has a large stock room, several shipping containers full of survival gear, and a shop space, open to the public – although he says that 99% of his business is done online.

Acoording to their website: ‘Preppers Shop UK was founded in January 2014 to meet the ever growing demands of UK preppers.

‘With ever growing instability worldwide, be it financial, military or enviromental, problems are imminent and showing ever increasing signs of problems arising rapidly. If you are not prepared your chances of survival are extremely slim.’

When Lincoln says ‘everything’, he is not joking. On the shelves you’ll find from sleeping and hazmat suits, crossbows and water bottles, gas masks and baked beans. There’s even a stash of toilet rolls behind the shop counter.

‘We’re emergency preparedness, but it covers the whole spectrum, so we go from rations, which is massive thing for us, water supplies – it’s about loading up so you’ve got enough if something happens,’ says Lincoln.

‘We do gear for flood defences, we do stuff for fuel shortages, we sell all the way up to full on nuclear war with gas masks and hazmat suits.’

Lincoln originally started his survivalist business in Bedfordshire, before moving it to Cornwall around four years ago.

Far from being some off-grid radical, operating on the edge of society, the 28-year-old was awarded Young Entrepeneur of the Year two years in a row after setting up his business.

‘I had an online shop selling surf gear – I was more into surfing and camping away,’ Lincoln recalls.

‘Then I started reading in magazines from America about prepping over there. It was before it was really a thing over here. It just sort of made sense, so I started getting involved more and more with the survival skills and bushcraft side of it.’

Since Lincoln’s shop for preppers began, business has grown and the customer base has broadened, but no more so than in the last two years, when the pandemic made prepping more mainstream.

While Lincoln still stocks plenty of eye-opening products for more extreme survivalists – such as steel baseball bats, rifle crossbows, machetes and a ‘King Arthur Excalibur Sword’ – he says that one of the main growth areas in his business has been food rations, due to worries about shortages in supermarkets.

‘More so than ever [prepping has] become more normalised, ever since Covid happened,’ he adds.

‘Before that, the stereotype was the outdoor, military, bushcrafter. But Covid made everyone a prepper, essentially.

‘Everyone knows they need to be prepared. They know the worst that can happen, they’ve witnessed it.

‘It’s affected everyone now, so it’s definitely become a lot more normalised and we’re finding that our average customer is your average, everyday person that you would see in Tesco.’

As you might expect, a business built around stock-piling carries plenty of stock. But with the recent surge in demand for prepping products, even some of Lincoln’s shelves are looking a bit empty.

Items that are currently out of stock include a British Military metal jerry can, a three month survival ration supply, and the Civil Unrest Defence Kit – featuring stab vest, ‘criminal identifier spray’ and heavy-duty steel handcuffs.

‘We’ve seen a huge surge, so for us it’s grown massively.’ Lincoln says. ‘It’s been something we’ve been promoting for years and it’s turning the tide now, so people are definitely realising and waking up and seeing that everyone should be prepared and it’s more important than ever.

‘We get such a wide range of customers. Somebody might be really worried about a nuclear attack or a chemical attack – a lot of it revolves around what’s happening at the time in the media.

‘If there’s bad weather and there’s flooding, then obviously there are a lot more people approaching from a that side of it.’

Lincoln adds: ‘We have a lot of people worried about food shortages this winter, so there are people coming at it from that angle. I think we’ve had every different type of customer with every different reason to be worried.’

The survivalist market in the UK may be flourishing, but has it really crossed from the peripheries of society into the mainstream?

Asked how many preppers he thinks there really are in Cornwall, Lincoln says: ‘Thousands, probably. Far more than people realise.

‘People think it’s a tiny, minute group. It’s still niche, but I think people would be surprised about how many preppers there are.’