The virus shrank my busy world… now I don’t want to go back: Esther Rantzen revelled in living life to the full, even as she turned 80. Now, she makes a poignant confession, that’s stunned her worried family

My children told me to slow down, but I ignored them. Until Covid made me obey them. And that, I believe, is the best decision of my life.

Looking back, the stupidest aspect of the old me was my smugness, the pride I took in being constantly busy.

‘Keeping busy?’ I was always asked, and when I said ‘Yes’, people would say ‘Good’. But it wasn’t, not really. Not good for me, not good for those I love.

Over the years, I’d schooled myself to believe any moment to myself was a moment wasted. In my career, I’d be first in the office and the last to leave.

Even when I reached 80, long after the age most people retire, day after day the alarm would wake me at 6.30am and, from then on, I was on automatic pilot, being driven by my diary. 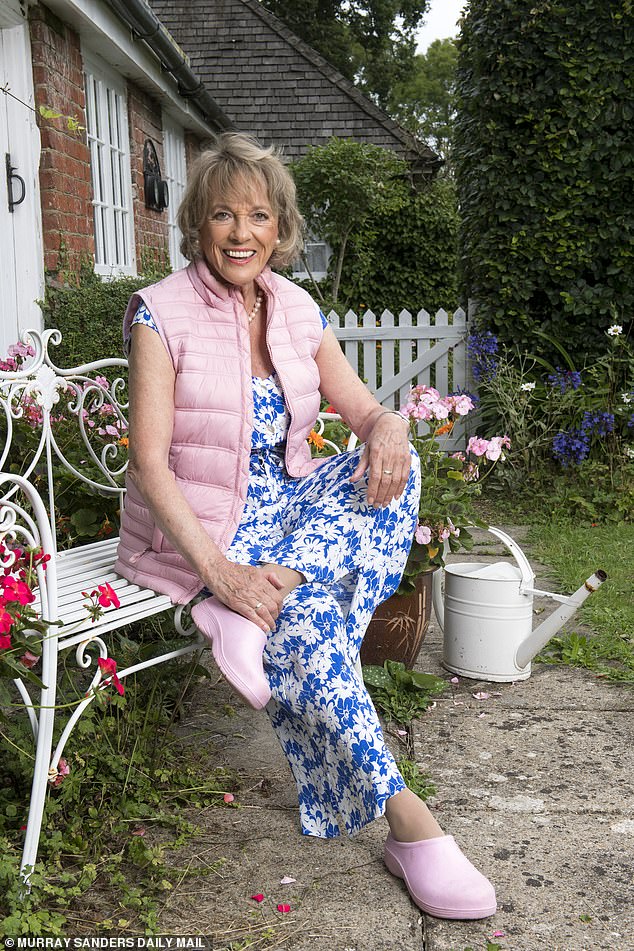 British television presenter Dame Esther Rantzen (pictured), now 81, said the stupidest aspect of the old her was her smugness, the pride she took in being constantly busy

There was my professional uniform to put on, which meant an hour spent sorting out the power jacket, kitten heels and make-up, and then throwing my papers together for the day ahead.

Maybe I’d be heading for a studio or an airport, sometimes there was a presentation, or a visit to a Childline base.

Whole days were devoured with end-to-end appointments. I was proud of my driving skills, as I forced my way through traffic, searching for a parking spot, then running to the meeting, the event, the pitch for a TV show or a charity grant.

Hours spent poring over papers in a basement would be punctuated by a ten-minute sandwich lunch or, occasionally, a trip to a restaurant where I’d share a salad with a colleague. It wasn’t back-breaking, it wasn’t 14 hours down a coal mine, but it took over my life.

Some of this frenzied activity was fun, or so I thought — a celebrity event or a publisher’s party — in which case my patient hairdresser would have arrived at my flat at dawn to tease my hair into a helmet which would last all day.

But now I ask myself, ‘Who was that crazy woman?’ I was like Alice in Wonderland falling down a hole, following my white rabbit, the compulsion to keep busy. What was I thinking?

I should have known better. Callers to the Silver Line (the helpline for older people) say they get lonely as everyone around them is constantly ‘busy’: their family is too busy to call, their neighbours are too busy to drop by, the carers and shopkeepers are too busy to chat. It’s a national addiction, fuelled by emails and the internet and, looking back, I was as guilty as anyone.

Two years ago, before the pandemic, my three children took drastic action to bring me to my senses, and staged an intervention. My daughters arrived in my flat, while my doctor son joined via Zoom. They told me to slow down.

They pointed out that they wanted time with me, that most of my busy-ness was self-induced by an inability to say no. What were my priorities, now I have grandchildren, they asked. What was it for?

But I didn’t listen, like a hamster on a wheel, I couldn’t stop.

The last day of my old life was Friday, March 13, 2020. I made a film for the BBC, sitting in a taxi with a film director while I recited my camera statements.

The next day, I left for the weekend in my country cottage in the New Forest in Hampshire and I was still there on the Monday when the director rang me to report he had Covid symptoms. Remembering our taxi journey, I had a week’s suspense wondering if I, too, would develop symptoms.

During that week, I watched the Covid cases climb everywhere in the UK, especially in the cities, so I made one last trip to my London flat to stock up on underwear. 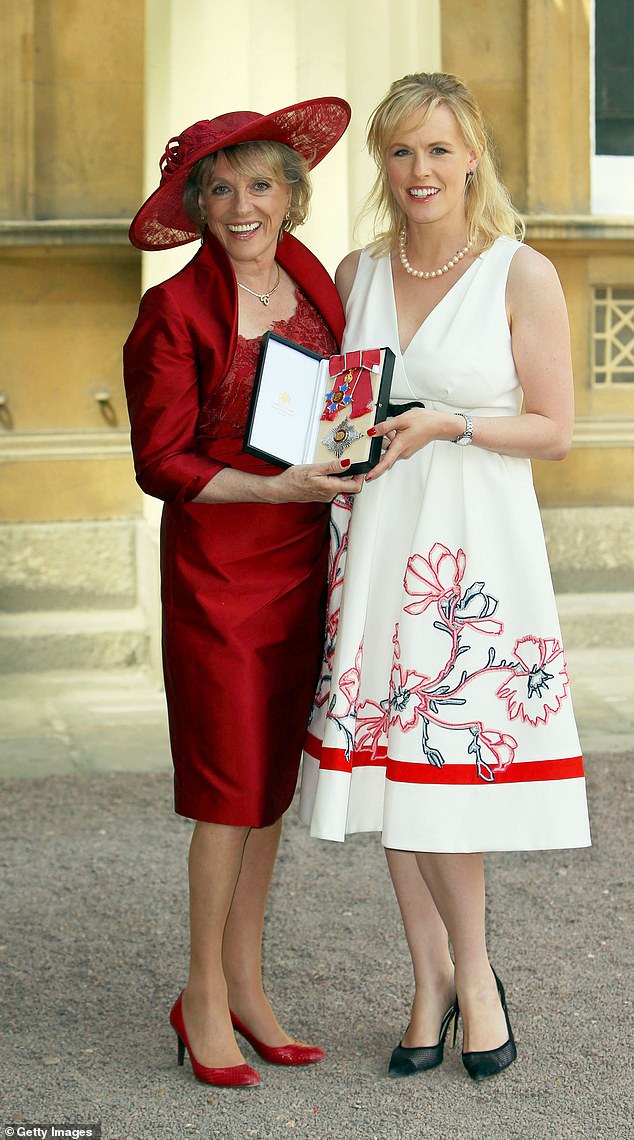 Days later, the UK went into full lockdown, and I’ve not been back since.

Covid has created tragedy, millions of lives lost, hospitals overwhelmed, companies ruined. But it has also forced some of us to reflect and reform our lives.

Those months in 2020, when I self-isolated with my daughter in the country, I noticed a huge change as I started to live my life in slow motion. Maybe that’s what they call mindfulness — I became conscious of each moment.

When the conveyor belt that drove me on stopped, I could see so much that I’d been blind to. Spring used to be a snapshot of a cherry tree outside an office window, now in my new life, I could watch the gradual greening of treetops, hear the symphony of bird-song, feel the softness and quiet of the country air.

The car that used to zip me through the city streets now sits in my drive. The longest trip I have made in the past 18 months has been to a clinic to get myself and my daughter jabbed.

My elder daughter has M.E. (chronic fatigue syndrome) and we had been planning to go away together on holiday. All those plans were cancelled, of course, yet I have no urge to travel now. The idea of a railway station or airport makes me shudder.

Sometimes, I’d remember the sunsets across a terrace in Italy I used to enjoy, so I bought an olive tree and planted it in Hampshire, to bring those memories home. Three months into the pandemic, in June 2020, I decided to sell the London flat. A Londoner for more than 70 years, addicted to the buzz of the city, I never thought I could give it up. My late-husband Desmond dreamt of retiring to the country, I contradicted him, ‘No, Desi, we’d get bored’. He was right, I was wrong.

As I cleared out the flat, I had to decide what to do with the wardrobe of clothes I collected during my working life, the uniform which was so much a part of the old me. Box after box of skirts, dresses and stilettos were lugged to Hampshire where they sit, unopened. I must get around to sorting them, I can’t believe I will ever wear them again. 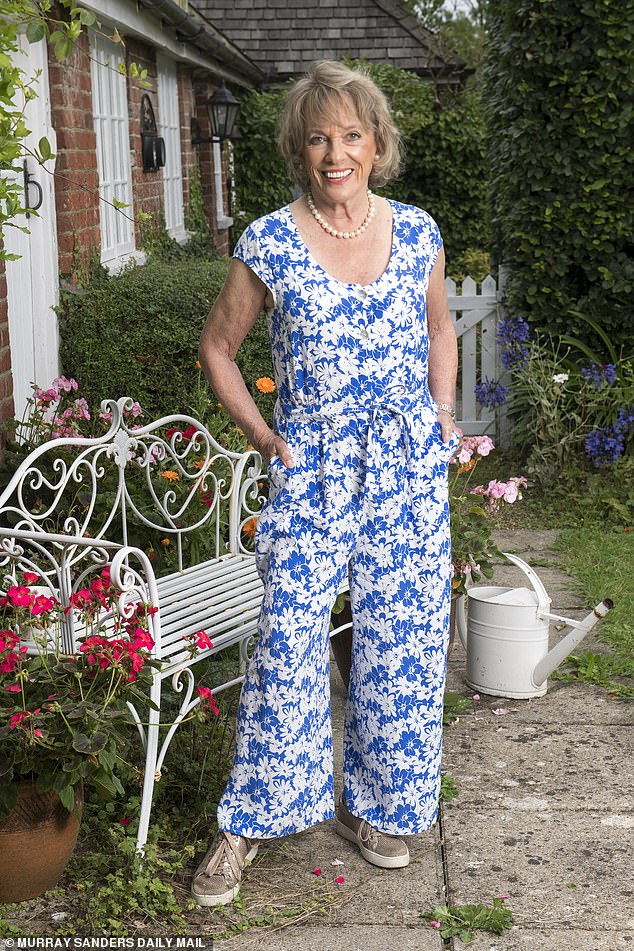 Describing her time during the nation’s lockdowns, Esther (pictured) admitted: ‘I discovered the joy of trousers with elastic and puffer jackets’

Instead, I discovered the joy of trousers with elastic and puffer jackets. In the first lockdown I bought my first onesie, now I have five. Oh the joy of wearing something that doesn’t clasp me around the waist and bum, that cuddles rather than constricts. And my feet have never been so happy. Joanna Lumley recently confessed that, for the first time, she is wearing trainers. I have followed her example with pairs of gold and silver trainers and I’m the owner of the most unflattering foot-covering invented, the clog. So easy to kick off.

And for the past 18 months I have cut, washed and set my own hair. I cannot believe it. Throughout my TV career I saw my hairdresser more often than I saw any of my family.

Four or five times a week I’d spend hours in the salon, relying on their professional skills to boost my roots. Now I stand in the bathroom with a sharp pair of scissors, trying to guess what is happening round the back, and hoping for the best.

No visits to the salon has meant no manicures either, so my nails are naked and seem happier liberated from the coating of gel. Even my eating habits have simplified. Without trips to the supermarket, I’ve not been inspired to try anything new and all my food is delivered to me.

Over the past few months I’ve turned down invitations. I’ve missed some dear friends’ funerals and some weddings.

So has the old social butterfly become a hermit? Am I shying away from any human contact in case they breathe on me?

Not quite. I believe the scientists who say children under 12 are no threat, so I play happily with my grandchildren. I have entertained a few small groups of friends in my garden, although we no longer kiss and hug, our chairs are spaced and we certainly don’t sing at one another.

I even had a small tea party in my sitting room, where I rearranged the armchairs to ensure we were socially distanced. When a friend arrived and advanced towards me with her arms outstretched, I saddened her by backing away. I am in the no-kissing, no-shaking hands and certainly no-hugging camp.

Have I given up on work and friendships? No, thanks to the internet. I am concerned about the plight of older people who are uncomfortable with the internet, some don’t own a computer or a tablet, and I know how the pandemic has isolated them.

But the internet has been a godsend in my life. A group of friends used to meet every month in a restaurant, now we see each other every week via Zoom.

The volunteers in Childline and The Silver Line I used to visit face-to-face now talk to me via the internet. Paradoxically, I have found these virtual conversations are more revealing than meeting in the flesh, as we see each other close-up, without the travel that used to make us arrive tired before we started.

And to keep me warm and cosy during my virtual conversations, I bought myself a gift — a pair of fluffy slippers shaped like rabbits. They cheer me up and nobody else can see them.

What about culture? Some people have been heartbroken to miss their trips to the theatres, the cinemas, the museums and art galleries, the meals in their favourite restaurants.

Some of my friends, as old as I am, are venturing out carefully and joining audiences, enjoying pubs again and Michelin-starred dinners. I listen to their descriptions, and I’m happy for them, but I’m not tempted.

My son says he is worried about me for a new reason — not because I’m gadding about too much, now he tells me I’m not going out enough. This time he’s intervening because he thinks I’ve become a sociopath.

He tells me the double-jab is such an effective protection I should stop worrying, take advantage of Freedom Day and get out and about again.

But I have three reasons to contradict him. Firstly, I know hospitalisations and deaths are falling, but more of my friends than ever have caught this virus, even though they have all been twice-jabbed — and they tell me it knocked them over for weeks. That sounds unpleasant enough to want to avoid it.

Secondly, I have decided my children were right, my priority at this stage in my life has to be my friends and family, I want to meet them as often as possible, as safely as I can. And thirdly, to be honest, I don’t miss my old life. I am more comfortable in this battered old skin than ever.

I know I have to keep my standards up, so I’m going to carry on working via the internet, still broadcasting, still writing, but far less than the hamster in the wheel I was 18 months ago.

And, in case anyone on Zoom is shocked by my onesie, I make sure I am respectable by wearing mascara and combining it with pearl earrings and a necklace. And I always make quite certain that nobody can see my feet.