From on high, a camera zooms through a cloud of vape smoke and along a row of buzzing high school bathroom stalls. Each contains its own mini-drama: A couple makes out; friends gossip and take drugs; one girl holds the hair of a friend who has had too much to drink; another cries on the toilet as she looks at her phone.

It’s a perfect cross-section of modern teenage life as it is shown in Euphoria, HBO’s candid depiction of the dark underbelly of suburban Gen Z. With its gorgeously stylised cinematography and award-winning acting, music and makeup, the series found acclaim among viewers and critics, earning three Emmys and nine nominations to date. 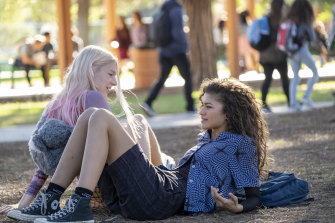 Zendaya, right, and Hunter Schafer in a scene from the new season of Euphoria.

When Season 2 arrives on Monday on Binge, viewers will finally get a chance to check on the show’s drug-addicted protagonist, Rue (played by Zendaya), who had just relapsed the last time we saw her. By the end of Season 1, she and her best friend and love interest, Jules (Hunter Schafer), had made plans to run away together, but Rue backed out at the last minute. Jules left anyway, leaving her alone on the platform as the train sped away toward “the city.” (The series was filmed in Southern California, but specific locations are never identified.)

Two and a half years have passed since the Season 1 finale premiered. Two hour-long specials since then, set just days after the events of the finale, advanced character development if not necessarily the plot — the first depicts a post-relapse conversation between Rue and her Narcotics Anonymous sponsor, Ali (Colman Domingo); the second focuses on Jules’ first therapy session after her runaway attempt.

What brought Rue and Jules to that train station? And where did we leave the show’s many other characters? You may have forgotten a few details since the first season ended, in 2019. Here’s a refresher before the long-awaited Season 2 premiere. 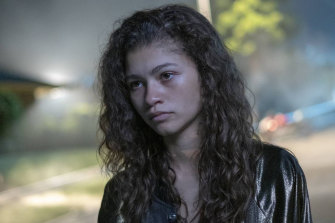 Zendaya as the troubled Rue in season one of Euphoria.

At a young age, Rue was diagnosed with obsessive-compulsive disorder, attention deficit disorder and general anxiety disorder. Her symptoms make everyday life difficult, and she developed an addiction to pills in her teens.

Rue spent the summer before her junior year in rehab after her sister Gia found her on the floor, overdosed and unconscious. The series began when she returned home from rehab and promptly made clear that she had no intention of staying clean.

This is when she met Jules, a transgender girl who had just moved from the city to the suburbs, and they quickly developed a camaraderie. Throughout the season, Rue was emotionally dependent on Jules, and her sobriety relied upon their relationship. Rue first decided to stay clean after a drug dealer named Mouse (Meeko) forced her to try fentanyl, and she blacked out. Jules, who took care of her while she was unconscious, told Rue that she could only be around her if she was clean. Rue broke her promise to stay clean a few times, but she managed to stay sober for three months until Jules ran away from home. 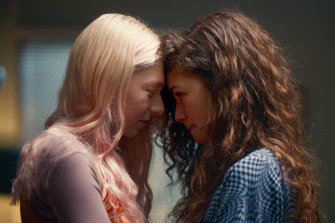 Hunter Schafer as Kat and Zendaya as Rue.

Jules and Kat (Barbie Ferreira), who from a young age had a secret life online as an internet-famous fan fiction writer, made important realisations in Season 1 about their sexual self-expression, and their encounters online helped, for better or worse. There is a lot of sex in Euphoria, and the show’s writers included sexual interactions from the digital world, as well.

Jules often uses dating apps to meet men. One of them, whom she met in the pilot, went by “DominantDaddy”; the two met at a motel, and a hard-to-watch sex scene ensued. It turned out that “DominantDaddy” was the father of the high school football team’s toxic star quarterback, Nate (Jacob Elordi), who has serious anger management and daddy issues. (Nate discovered his father’s collection of sex tapes, many of which involved younger partners, when he was 11 years old.)

Shortly after, Jules developed an online relationship with “Shyguy118,” who said his real name was Tyler. She fell in love with him, but she was disappointed to discover later that she was being catfished by Nate the whole time. After countless unfulfilling hookups and encounters, Jules realised that she had built her entire womanhood based on what she thought men desired. Shortly after, her relationship with Rue became less strictly platonic. And shortly after that, she fell for a mutual friend, Anna (Quintessa Swindell), during a weekend excursion to the city. She told Rue in the finale that she was in love with them both.

But in the process, she closed herself off from some genuine people, including her primary love interest, Ethan (Austin Abrams). In the season finale, Kat apologised for being rude to him and they made up as he told her, charmingly: “Is one of us going to get hurt? Yeah, probably. But I’ll do my best to make sure that it’s me.“ 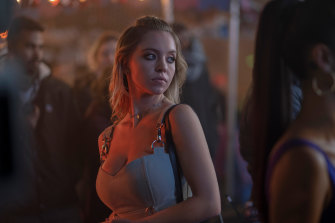 Cassie (Sydney Sweeney) is a good-hearted girl with a rough past that continues to haunt her. Her boyfriend, Chris McKay (Algee Smith), a freshman football player at a nearby college, loves her. But he keeps his distance publicly in an effort to minimise the taunting from the local jocks, like Nate, over the many leaked nudes they’ve seen of her online. The couple clearly have trust issues, and Cassie never told him that she made out with her classmate Daniel behind his back, twice. But she did tell McKay about her pregnancy with him, and in the finale, she got an abortion.

Maddy (Alexa Demie) and Nate share a mutually destructive love. In one moment they are literally at each other’s throats and in the next they’re cozied up. During one of their countless relationship breaks, Maddy publicly hooked up with a 22-year-old named Tyler (Lukas Gage) at a party. An enraged Nate broke into Tyler’s apartment and brutally beat him. He also choked Maddy at a carnival after she confronted him about finding dozens of different pictures of penises on his phone, leaving bruises on her neck. Nate was arrested in connection with the assault, but Maddy told the police and school officials that it wasn’t him.

Nate ultimately slithered out of the mess by framing Tyler, and he reunited with Maddy. But she then discovered the sex tape of Nate’s father (Eric Dane) and Jules. In the finale, they admitted to each other that their relationship was not healthy and that they should break up for good.

One of the most frustrating parts of Euphoria is Nate’s ability to manipulate other characters, even his victims, into doing what he wants. As part of his scheme to get out of the assault charge, he blackmailed Jules into testifying as a witness against Tyler; if she didn’t, he would report her for distributing child pornography. (He collected nudes from her while they talked on the dating app.)

Nate also reported Fez (Angus Cloud), Rue’s former drug dealer, to the police after Fez told Nate to leave Jules and Rue alone. The police raided Fez’s place, and he and his little brother, Ashtray (Javon Walton), a preadolescent with face tattoos, flushed all their drugs down the toilet. In order to pay back his supplier, Mouse, for all the drugs, Fez robbed Mouse’s supplier, a wealthy suburban doctor.

The Euphoria Specials: A Codependent Camaraderie

In her therapy session, Jules confirmed that her mother was a recovering drug addict, a fact she had kept secret from Rue. Rue had provided her with the love and sincerity she desperately needed since moving to the suburbs, and Jules admitted she never wanted to lose her.

Rue was more resentful toward Jules in her conversation with Ali about addiction, life and loss. Rue confessed that she no longer cared to get clean and that drugs were the only reason she hadn’t killed herself. Replacing one dependency with another — with Jules taking the place of drugs in Rue’s life — had not worked out.

All through Season 1, the teenagers in Euphoria were dependent on their partners, friends, the internet, sex and drugs. Each of them crashed and burned. In Season 2, the characters will begin with ostensibly newfound wisdom. Who will they be now?

This article originally appeared in The New York Times.