After the US's stalled Hillbilly Revolution, Joe Biden's presidential inauguration this week (taking place early Thursday morning AEST) should be quite a shindig.

Everyone? Yes, everyone. I mean, is this a sentence you expected in 2021? "The New Radicals will reunite for the first time in over 20 years to perform You Get What You Give for Biden's inauguration parade."

I love that song! How does it go again? It goes "One, two, one, two, three owww!", then there's some sing-songy lines about social alienation in a world primed for the privileged, then there's a critique of health insurance companies, Wall Street and, uh, Beck and Marilyn Manson, and then we're told "Don't give up" because there's pop music in our souls. Or something.

Oh yeah, I love that song! They’re reuniting? Frontman Gregg Alexander called the invite a "huge honour". "If there's one thing on Earth that would possibly make us get the band together, if only for a day, it is the hope that our song could be even the tiniest beacon of light in such a dark time," he told Rolling Stone.

Is Biden a fan? In his 2017 autobiography Promise Me, Dad, Biden wrote that it became his family's "theme song" for son Beau during his battle with cancer. "During breakfast, Beau would often make me listen to what I thought was his theme song, You Get What You Give by the New Radicals," Biden wrote. "The words to the song are: 'This whole damn world can fall apart. You'll be ok, follow your heart.'" 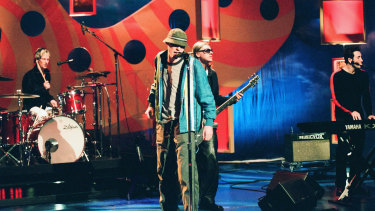 That's beautiful. Almost as beautiful as the song's bridge: "Come around, we'll kick your asses!" Vice President-elect Kamala Harris' husband Doug Emhoff had also been using the song as his "walk-on music" during the presidential campaign.

Guess it makes sense that, with all the chaos happening in the US, a dose of '90s nostalgia is proving so welcome. Exactly. Or as one online commenter put it: "[Millennials] are saddled with debt, unable to afford housing or healthcare, can't start families, and our adolescence until now has coincided with one of the worst stretches of modern history. This is why the New Radicals reunion hits."

"We'll never own a house or afford a baby. But the New Radicals are back together!" Sure, that sums up a generation. So who else is performing, Len doing Steal My Sunshine? That would've been a nice dig at Trump's election "robbery" claims. But sadly, no. Lady Gaga will be there. She'll be doing the US national anthem. But due to the threat of COVID and/or violence, much of the inauguration celebrations will be a virtual affair, in a TV special hosted by Tom Hanks. 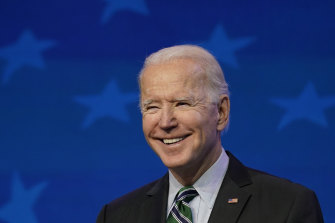 Joe Biden’s inauguration celebrations will feature a range of musicians and Hollywood stars.Credit:AP

This sounds way better than Trump's inauguration in 2017. Such a cruel thing to say about 3 Doors Down's Kryptonite.