British mountaineer Robin Fisher became at least the eighth person this year to die while climbing Mount Everest in Nepal. He died during his descent on Saturday in the so-called “death zone,” where low oxygen levels, combined with exhaustion and weakness, can prove fatal. 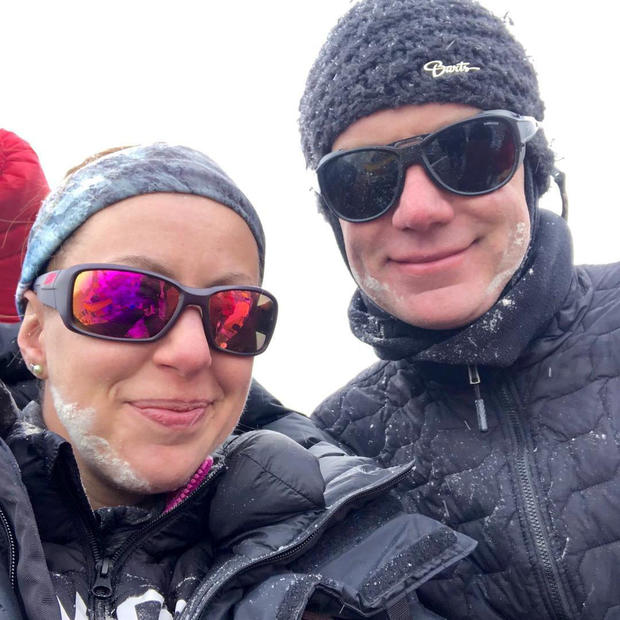 On Monday, officials said American Chris Kulish died on the mountain, marking the ninth fatality on the Nepali side of Everest this climbing season. A few days before Fisher’s death, he posted a video to Instagram, warning that overcrowding on the mountain could prove deadly:

Climbed up to camp 3, 7500m but the jet stream had returned closing the summit after only 2 days so I descended to basecamp. Around 100 climbers did summit in those 2 days with sadly 2 deaths, an Indian man found dead in his tent at camp 4 and an Irish climber lost, assumed fallen, on his descent. A go fund me page has been set up for a rescue bid for the Irish climber but it is a well meaning but futile gesture. Condolences to both their friends and families. Both deaths happened above 8000m in the so called death zone where the majority of deaths of foreign climbers happen. Around 700 more people will be looking to summit from Tuesday the 21st onwards. My revised plan, subject to weather that at the moment looks promising, is to return up the mountain leaving basecamp Tuesday the 21st 0230 and, all being well and a lot of luck, arriving on the summit the morning of Saturday the 25th. I will be climbing with my Sherpa, Jangbu who is third on the all time list with an incredible 19 summits. The other 4 members of our team decided to remain on the mountain and are looking to summit on the 21st. My cough had started to return at altitude so I couldn’t wait with them at altitude for the window to open without the risk of physically deteriorating too much. Furthermore as I had missed due to sickness the earlier camp 3 rotation best practice was for me to descend to allow my body to recover from the new altitude high so I could come back stronger. This was not an easy decision as the 13 hours climbing from basecamp to camp 2 in a day was the hardest physical and mental challenge I had ever done, now I have it all to do again. Finally I am hopeful to avoid the crowds on summit day and it seems like a number of teams are pushing to summit on the 21st. With a single route to the summit delays caused by overcrowding could prove fatal so I am hopeful my decision to go for the 25th will mean fewer people. Unless of course everyone else plays the same waiting game. #everest #everest2019 #lhotseface

On “CBS This Morning” Monday, correspondent Jericka Duncan explained some of the hazards facing those climbing 29,000 feet to the summit of the world’s tallest mountain.

Add a record number of people, and we’re seeing more deaths on the mountain than in recent years. The government of Nepal issued a record number of climbing permits this season — 381 people were given permission to ascend the world’s highest peak, which can create a logjam to reach the summit.

That exposes climbers to extended periods in areas with dangerously low oxygen levels. 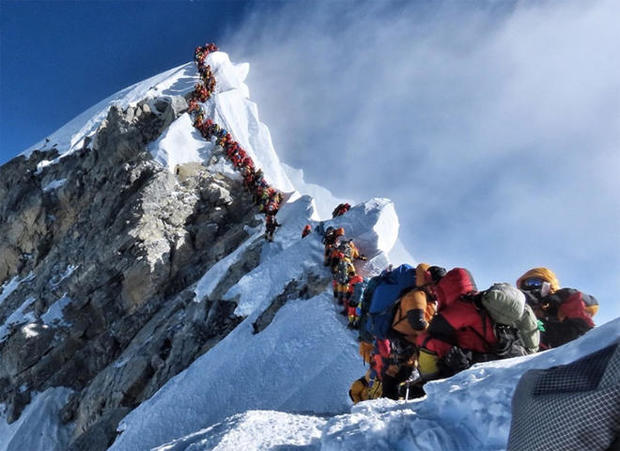 Expert climbers say May is the only month where strong winds die down enough to make summiting Everest possible. This year, that window was shorter than usual, meaning more people trying to reach the summit at the same time.

The combination of these two factors leaves people in the so-called “death zone,” right before the peak, much longer.

Expert climber Dr. Jon Kedrowski said, “If you’re on oxygen up high, on a day where it’s crowded and you have to wait on line, you can run out of oxygen, and that can lead to problems.”

Climber Cory Richards said, “Too many people, one weather window, all in, there are obvious consequences to it.”

Tibet’s side of Everest is much more heavily regulated, and that government issues a limited number of permits. But Nepal’s side is unregulated, and there is no cap on how many permits are given.

The permit system is a major economic driver for Nepal. Each permit costs $11,000 — and that doesn’t include money that is spent on food and hotels, so it’s unlikely that Nepal, a poor country, will change its system.

Since the issuance of climbing permits is unregulated. some people who probably should not be attempting the dangerous climb can gear up and go anyway. That can also contribute to bottlenecking, as inexperienced climbers often go slower than seasoned veterans, leading to people waiting in line.

Mountaineering expert Alan Arnette, who runs a blog on climbing Everest, put it this way: “You have to be certified to scuba dive, or qualify for elite events such as the Boston Marathon or the Kona Ironman competition, but not to climb the highest mountain on Earth.”